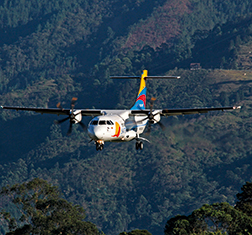 Share on:
In recent years, Colombia has signaled a willingness to invest heavily in new and ambitious projects in almost every area of transportation. These far-reaching efforts to improve its infrastructure have […]

Colombia’s roadways are currently undergoing a six-year, USD16 billion reconstruction and renovation project that includes the development of 40 highway concessions. 19 of the concessions have been adjudicated, but financing issues have slowed progress on the final stages. These 4th Generation (4G) road concession projects call for the development of more than 6,000km of new roads, over 130km of tunnels, and nearly 170km of new bridges. The vast majority of the projects aim to improve connectivity across the country, smoothing transportation between major economic centers. Major linkages between port infrastructure and key cities are expected to lower shipping prices and improve the flow of goods and people across the country.

With 2,400km of narrow gauge railways, Colombia’s railway infrastructure is somewhat limited compared to several of its neighbors, but steps are being taken to improve it. The narrow gauge infrastructure includes four distinct systems that are operated and managed by a mix of private firms and governmental entities. Public rail systems have not been a key priority for the government or private enterprise, and as such they are not as reliable as other networks in the region. The country also has two standard gauge railroads, both of which are privately held and used to transport coal from extraction points to shipping ports.

While Colombia’s rail system has historically been fraught with issues, there are indications that major and long-lasting redevelopment is on the horizon. There are a number of plans currently underway, including seven projects under construction and three in the pipeline. That being said, private industry has articulated an interest in having the government take a more active role in moving rail infrastructure forward. In an interview with TBY, Miguel Centanaro, President of Ferrolat, discussed the size and potential of Colombia’s rail infrastructure, noting that the country is in great need of an efficient rail system to help move the more than 300 million tons of freight transported by the country every year. According to Centanaro, the Colombian government needs to take a greater role in spearheading the development. “The government is simply waiting for international companies to come and develop the railroads, but it needs to be far more involved and enthusiastic about the project and the process,“ said Centanaro. “As it stands, two things are most important: a masterplan and a political framework for how we will develop the network.“

Air travel is one of the country’s fastest-growing modes of transport, and industry leaders expect the sector to soar in the coming years. According to the US Commercial Service, passenger air travel grew by 10.2% between 2015-2016 and carried more than 34.2 million passengers. Due to substandard road conditions, many Colombians prefer to travel by plane than car or bus. According to Aerocivil, the country’s civilian aviation authority, demand rose by nearly 2.3% in the first two months of 2017 over the same period in 2016. Cargo transport has also grown 3.5% in the last two years, carrying more than 770,000 tons of cargo in 2016. Analysts expect passenger and cargo transport to grow even more in the coming years, as a number of ambitious redevelopment and expansion plans have been initiated at 52 regional and national airports. The USD2.9 billion plan is intended to upgrade many of country’s air transport facilities in an attempt to keep up with growing tourism numbers.

A notable example of such projects is the new Eldorado II terminal at Eldorado International Airport, which is expected to be completed by 2021. Together, Eldorado I and II will be capable of handling over 69 million passengers a year. Medellí­n’s Jose Maria Corova airport and Barranquilla’s Ernesto Cortissoz Airport will both see refurbishment and new facilities in the coming years, and Aerocivil hopes to expand the Ernesto Cortissoz Airport’s capacity to 7.4 million by 2036. Alfonso Bonilla Aragon International Airport in Cali is already in the midst of a significant USD120 million expansion project, which includes the development of a new 20,000sqm international terminal

On Colombia’s Caribbean coast, the most important ports are in Barranquilla, Cartagena, and Santa Marta, while on the Pacific coast the key ports are in Buenaventura and Tumaco. Buenaventura is currently undergoing a USD250 million expansion and renovation, and Baranquilla and Santa Marta are undergoing USD180 million and USD100 million projects, respectively. Cartagena receives the vast majority of cruise line traffic, with 164 projected to arrive in 2017, while Santa Marta is a distant second with only 14 stops projected.
Inland waterways carry only around 3% of the cargo transported in the country, and the two most important routes are the Magdalena and Atrato waterways, which account for 45% and 52% of cargo movement, respectively. The Magdalena waterway is navigable for more than 2,700km, and it serves as an avenue of shipment for petrochemicals, fertilizers, cement, cattle, wood, and machinery. The waterway suffers from underutilization due to transshipment requirements and a lack of dredging, channel improvement, and levy infrastructure. There have, however, been steps taken to improve dredging conditions along certain waterways. Brazilian company Odebrecht is overseeing a USD1 billion project that includes dredging 965km of river in order to connect it with the port in Barranquilla, though recent hurdles are likely to postpone completion of the project.

In the last two years, Colombia gained three spots on the Logistics Performance Index and currently sits at 94th. Colombian logistics have made advances in some of the core competencies assessed by the index. It currently sits 129th in customs, 95th in infrastructure, 103rd in international shipments, 81st in logistics quality and competence, 96th in tracking and tracing, and 78th in timelines.

As a result of a strong push by municipal and federal entities, Colombia’s public transportation system has seen impressive growth in recent years, and its solutions and initiates have garnered international attention, according to the World Economic Forum (WEF). The country’s National Urban Transport Program (NUTP) and its utilization of Bus Rapid Transit (BRT) networks have served as a model for surrounding countries. As of last count, the country had initiated six BRT systems in core urban centers under the first generation of NUTP spending. The NUTP’s second generation of funding is “bringing context-sensitive transit systems in 13 intermediate-sized cities,“ according to the WEF. The country’s most visionary mass transit project is the Bogotá Metro, and current plans call for a network of 28 stations along 27km of track. While initial projections put the cost of the project at around USD7.5 billion and the expected completion date in 2021, observers expect delays.

According to the WEF, transportation in Colombia has been revolutionized by the growing ubiquity of motorbikes and the development of a moto-taxi infrastructure. In the country’s major urban centers, this form of transport has grown enormously in popularity. Additionally, motorbikes and moto-taxis have put pressure on mass transit systems in smaller urban areas and parts of cities underserved by existing public transport services. In the city of Sincelejo, moto-taxis have already captured 62% of the municipality’s transportation market. The drop-off in mass transit ridership has led some policy makers to reimagine ways to incentivize public transport, and integrated networks, greater regulation, concession systems, new buses, GPS tracking, and improved labor conditions for drivers are all being considered, according to the WEF.