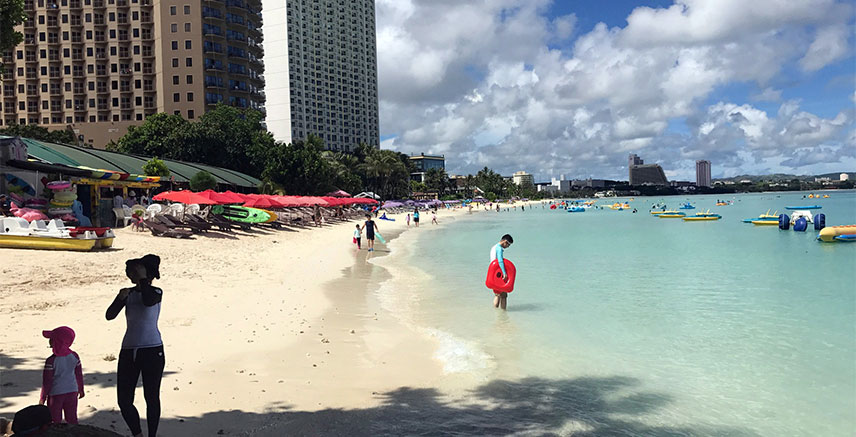 Share on:
In the wake of tensions between the US and North Korea, and the subsequent scrambling of millions to find Guam on a map, we take a look at five Pacific Ocean destinations that could become flash points in the ongoing spat.

People cool off at a popular resort beach in Tamuning, Guam

Thanks to Donald Trump and Jim Jong-un, there has rarely been a summer silly season for news as exciting and terrifying as this one.

With the escalation of tensions between the US Commander-in-Chief and the leader of one of the most repressive regimes in the world, Kim Jong-un, TBY takes a look at five potential Pacific Ocean flashpoints.

What, where? Yes, the biggest city in the US state of Alaska is home to a major air force base and, at nearly 6,000km from North Korea, it is also one of the closest. Alaska itself, in May 2017, hosted the 12-day biennial Northern Edge training exercise. This year, the games involved 6,000 soldiers, sailors, and airmen, on top of nearly 200 aircraft and ships. While such exercises would often have been aimed at flexing American muscle at the Russians across the Bering Strait, Alaska has more recently found itself within the purported radius of North Korean missiles, and so the exercises have taken on new meaning.

As a tourism destination, Anchorage offers a number of cultural sites including the Alaska Native Heritage Center, lush forests and lakes, and glaciers, not to mention more snow than you could shake a stick at. The website Anchorage.net says, “Anchorage is the place where young spirits and adventurous souls come to play,” which is a fitting slogan given current geopolitical tensions.

The island of Guam in the North Pacific Ocean can hardly have escaped the attention of news junkies over recent weeks. It is seen as the most likely first target for a North Korean attack and featured in “attack plans” drawn up by the North Korean military in response to perceived military posturing across the DMZ.

Guam, which became American following the Spanish-American war of 1898 and endured months of Japanese occupation during WW2, houses the strategic Guam Naval base in Apra Harbor and the Anderson Air Force Base to the North of the island. The unincorporated US territory is the closest American land to North Korea, and has an economy somewhat reliant on its military significance. It is also home to pristine beaches and year-round sunny weather, with some on the island hoping that Guam’s recent foray in the public consciousness could land it increased tourism revenues going forward. Some 1.53 million tourists arrived on the island in 2016, a new record, with 544,954 Koreans making the trip. That makes Korea the island’s second-largest source of tourists after Japan.

Pyongyang and its southern neighbor haven’t exactly been seeing eye to eye lately. The Korean War was never properly solved, which accounts for the imposing demilitarized zone that works today as a buffer between the two sides. And when tensions flare, you’d be forgiven for being on edge in the capital of South Korea, Seoul, which is just 195km from Pyongyang and contains 10 million souls. It also houses two US military bases.

While Pyongyang has often hit the headlines for all the wrong reasons, Seoul has grown in popularity as a tourist destination, attracting 13.57 million people in 2016, a new record.

From food to temples, markets, and bright lights, Tokyo has it all. It is also only 1,200km away from Pyongyang and the capital of Japan, which is home to 54,000 American servicemen and women, whose job it is to maintain peace in the Pacific.

Japan is no stranger to the horrors of nuclear war, and one of the nations most alarmed by the nuclearization of the Korean peninsula.

To get the full experience of a country embroiled in the current crisis, however, one would need to head to Okinawa, the largest of the Ryukyu Islands and once an independent kingdom. The island saw brutal fighting during WW2 and is today home to the largest US military presence in Japan, with 9 facilities.

Honolulu is the capital of the US state of Hawaii, the quintessential tropical paradise. The capital is the perfect place to enjoy all the islands have to offer, including beaches, food, weather, and hospitality. One of the most famous surf spots in the world, it also offers the perfect chance to unwind from the stresses of modern life, kick back with a cocktail, and forget about silly season. Or does it? With 11 US military bases, including the infamous Pearl Harbor, it is one of the most strategic US military locations in the Pacific. At 9,000km from North Korea, it is estimated that a missile launched from the peninsula would take 37 minutes to arrive.