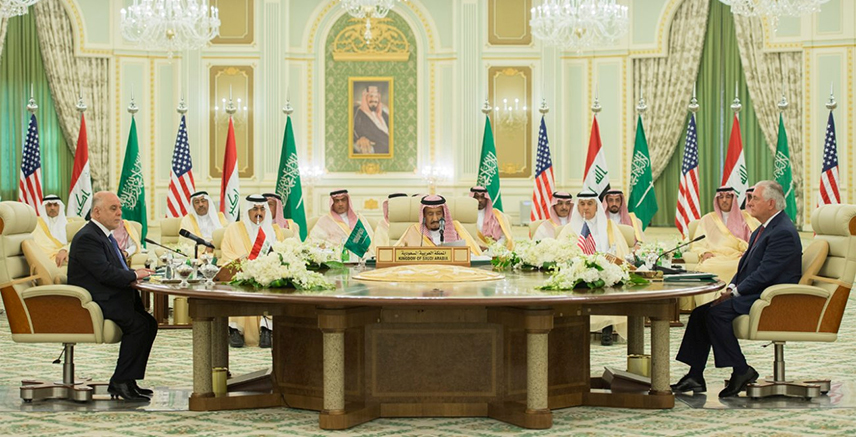 A balancing act between Saudi & Iran

Share on:
Tillerson's arrival in Saudi Arabia and Iraq this week coincided with the inaugural session of the Saudi-Iraqi Coordination Council.

Strange winds were blowing across the Middle East this weekend as US Secretary of State Rex Tillerson traveled to Saudi Arabia on Saturday.

As part of a six-day journey that will bring him beyond Riyadh to Qatar, Pakistan, India, and Switzerland, the promise of Saudi-Iraqi reconciliation hangs in the air.

As part of broader US efforts to stem the regional advance of Iran, fresh off last week’s major victory helping Baghdad defeat the Kurdish Peshmerga to recapture the much-contested oil-rich city of Kirkuk, Tillerson’s arrival also coincided with the inaugural session of the Saudi-Iraqi Coordination Council.

A body being championed by the Trump administration to reconcile two of the Middle East’s most important governments, the Council marks a bold step forward in the history of Baghdad-Riyadh relations.

After a quarter-century of severed ties following Saddam’s invasion of Kuwait (1990), with which both states share a common border, Riyadh only reopened its embassy in Baghdad in 2015.

An ironic embodiment of the old suburban adage that “good fences make good neighbors,” the move came just after the Saudis began the construction of a 900km border wall across its northern border with Iraq.
Despite the regional catastrophes that have unfolded since then, the two countries’ bilateral ties have only gotten better.

The worse, the better?

In February 2017 Saudi Foreign Minister Adel al-Jubeir visited Baghdad, the first of his professional ilk to do so in 27 years, not to mention the sole high-ranking Saudi government visit since the US invasion of 2003.

Six months later, the red carpet was laid out for the controversial, anti-US, Baghdad-based Shiite cleric Muqtada al-Sadr in Riyadh.

As a man who commands the loyalty of much of Iraq’s urban working-class Shias, the cleric has not only kept a Tito-like distance from Tehran, but also repeatedly called for the resignation of Syrian President Bashar al Assad.

A fiercely independent fire-breather, his is a voice and tacit political endorsement that no regional, or international, government can afford to ignore. That he’s also been one of Iraqi Prime Minister Haider al-Abadi’s most violent critics—his supporters stormed the Green Zone in April 2016 and rushed it again in February 2017—has not escaped Saudi’s attention.

Given the rapid deterioration of ties between Saudi Arabia and Iran, this makes the timing of the Saudi-Iraqi rapprochement all the more extraordinary.

It was only in January 2016 that Riyadh beheaded one of its own leading Shia clerics, Sheikh Nimr al-Nimr, on trumped-up terrorism charges for leading anti-government protests during Saudi Arabia’s very own short-lived (Shia) Arab Spring.

When protestors burned down the Saudi embassy in Tehran and Ayatollah Khamenei promised ‘divine retribution’ for Nimr’s ‘martyrdom,’ many feared the Sheikh would prove the Shia reincarnation of Franz Ferdinand; that Riyadh has not only avoided the Holy Wrath of Hussein, but even managed to bolster its ties with one of Tehran’s biggest allies is no small achievement.

Yet diplomatic house calls have not been the only development. In August, Saudi officials reopened conventional non-Hajj-related border crossings with Iraq for the first time since 1990.

A huge boon to bilateral trade and cultural-religious ties, this move was followed by an even bigger development in mid-October, the resumption of non-stop daily flights between Baghdad and Riyadh for the first time since Nelson Mandela was released from prison.

Indeed, Secretary Tillerson’s visit comes at an extraordinary historical juncture in the region; less than a month after the Kurdish referendum for independence, a week after Baghdad and Tehran took back Kirkuk, and hardly days since US-backed Kurdish and Syrian Arab forces seized back ISIS’ self-styled capital of Raqqa, the caliphate’s last major urban stronghold.

Each of these momentous events was a separate victory for irreconcilably competing sides, reinforcing the urgency of Tillerson’s three-pronged visit: first, to soften one of the biggest contradictions of US foreign policy, namely that one of its chief allies in the region is also close to Iran.

Second, to give Washington greater leverage in helping pick up the pieces of a post-ISIS region.

And third, to try and resolve the four-month Saudi-led blockade against Qatar.

Despite his efforts, each of these may prove illusive. Though reasonable progress has been made in reconciling Baghdad with Riyadh, Tillerson’s unrealistic pleas for “all foreign troops in Iraq to go home,” a barely hinted dig at the Popular Mobilization Forces, rings somewhat hollow.

Not only are the vast majority Iraqi, they are the only thing keeping the country’s (still existing) territorial integrity together.

As for resolving the diplomatic crisis over Qatar, Tillerson was refreshingly forthcoming. Rebuffed on Saturday when pressing his counterpart Crown Prince Mohammed Bin Salman to talk to Doha, he merely quipped that “we cannot force talks upon people who aren’t ready to talk.”

The hand that feeds

Ever the ‘businessman’ in rooms full of sycophants and politicians, Rexxon’s measured generosity was not so much in evidence in his dealings with Iran’s Revolutionary Guard Corps (IRGC), the shock troops of the Islamic Revolution who still control much of the Iranian economy and are thought to be spearheading the regime’s aggressive foreign policies in Syria, Yemen, Lebanon, and Iraq.

Though Trump has repeatedly backed down from scrapping the nuclear deal with Iran—or simply passed the baton for doing so to Congress—Tillerson finally upped the ante against the IRGC on Sunday.

Appearing next to Saudi Foreign Minister Adel al-Jubeir, he effectively threatened any companies tempted to do business with the organization or any of its many economic subsidiaries, saying those who plan to “do so at great risk.”

Given that the IRGC’s hand reaches into countless national cookie jars, the threat of being cut off from the USD19 trillion US economy hangs like a nuclear cloud over the many German, French, Spanish, Italian, and other firms eager to access the Iranian market: what if the flour outfit or toy factory they are investing in is secretly controlled by the IRGC?

Despite nearly 40 years of diplomatic sanctions, blockades, and extremely bad blood, this is the first time the US has actually targeted the Revolutionary Guards or their golden geese.

While Europeans will almost certainly back down for the time being, it remains to be seen whether Russian and Chinese firms will too. Seen from Moscow, the sooner they internationalize their crypto-rubble, the better.

Tillerson arriving in Islamabad on Tuesday after a brief layover with Afghan President Ashraf Ghani at Bagram Airfield in Afghanistan. He was quick to reiterate the conditions-based approach for US foreign policy in South Asia first announced by Trump in August.

Including Afghanistan in this new regional rubric, Washington’s top diplomat now says that only once certain requirements are met, ie Pakistan dismantles the countless terrorist ‘safe havens’ on its soil, particularly those of the Taliban and the Haqqani network, might very strained US-Pakistani ties be mended.

The novel weapons at Tillerson’s disposal are two-fold: further cuts to US aid, a figure that has already fallen precipitously since 2011, from USD3.5 in economic, humanitarian, and military outlays, to less than a billion in 2016, a numerical nadir not reached since 2007.

The second is further moral and material support for India’s growing role in the Afghan theater—an outcome Islamabad deeply objects to.

US Defense Secretary “Mad Dog” Mattis has already warned that the US will work with Pakistan but “one more time” to curb the influence of the aforementioned groups.

If not, he warned, President Trump will have no choice but “take whatever steps are necessary,” a threat that includes a greater role for India.

In the days leading up to Tillerson’s arrival, ‘whatever steps’ went for quite a stroll as US drone strikes killed dozens of purported militants across the country, including Omar Khalid Khorasani, leader of the Jamaat-ul-Ahrar (JuA), a breakaway faction of the Pakistani Taliban.

A man also much sought by Islamabad, Pakistan repaid the favor by rescuing a US-Canadian couple that had been held by the Haqqani network for the past five years. Kidnapped whilst backpacking across northern Afghanistan in 2012, each of the couple’s three children was born in captivity.

As Tillerson continues on his trek to New Delhi later today, Pakistanis remain livid that Afghan President Ashraf Ghani will be joining him.

Yet coming off a week of horrific violence in which his country lost 89 servicemen and more than 200 civilians to coordinated attacks, many of which targeted his country’s Shia minority, the Afghan leader can use all the help he can get.

Indians, for their part, seem happy enough to play the American beachhead in Donald Trump’s new “Indo-Pacific” policy announced in August—even, and some might say, especially, if that includes a more robust role in Afghanistan.

As Rexxon told a group at Washington’s Center for International and Strategic Studies (CIIS) on October 19, “The world’s center of gravity is shifting to the heart of the Indo-Pacific,” the central pivot off which the “US and India… must serve as the eastern and western beacons.”

Coming on the heels of the much-publicized quinquennial Chinese Communist Party congress, New Delhi’s desire to cash in on Tillerson’s flattering remarks is not surprising. Whether it can do so without being mercilessly sucked into the Afghan quagmire is another matter.

Lord knows greater powers have tried and failed—and maybe that’s the point. In the annals of history, Afghan failure may someday be a badge of honor, an homage to the folly of trying in a chaos-riven world.

Will New Delhi now get its turn?