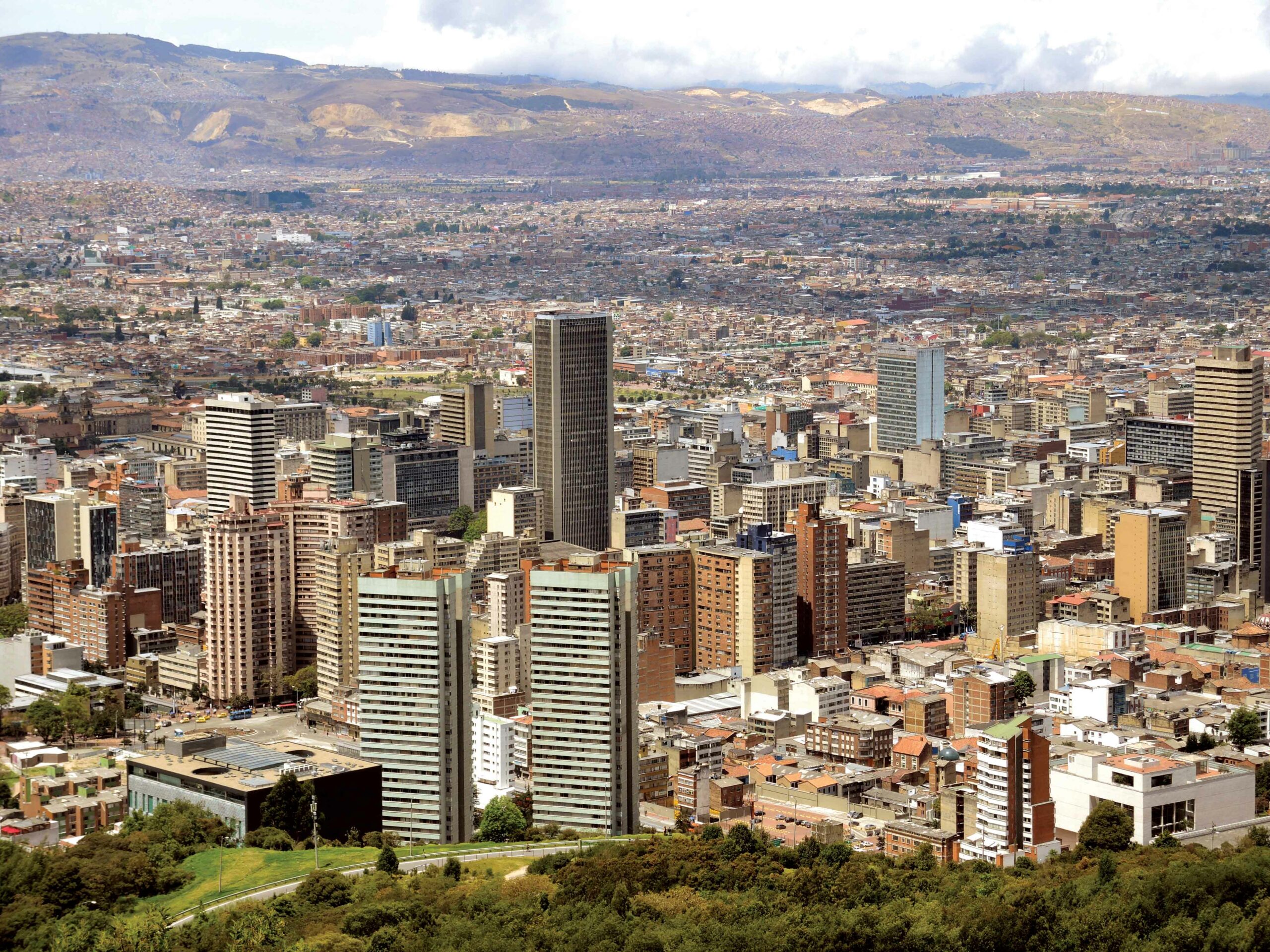 Share on:
Colombia's fiscal policy and a well-regulated financial system, not to mention sympathetic demographics, make the banking sector a robust proposition.

Colombian banks entered 2015 with a New Year’s handshake from ratings agency Moody’s, which maintained its “stable” outlook for the sector. Its reasoning was based on anticipated macroeconomic stability and systemic profitability, regardless of potential risk from accelerated lending growth. The Colombian peso (COP) depreciated by 32% against the dollar between July 2014 and March 2015. Yet according to Scotiabank, the local financial sector is structurally sound with confidence inspiring capitalization metrics. As of March 2015 over the previous twelve-month period total credit had grown by around 14% YoY. Encouragingly, too, mortgage lending appreciated by 17% YoY as the ranks of the employed swelled and interest rates appeared tolerable to prospective homeowners.

Sector return on equity (ROE) is at 12.5%, and return on assets (ROA) at 1.8%. Cost controls will help improve the banks’ operating efficiency ratios. According to the agency; “Over the next year or so, Colombian banks will benefit from new business opportunities owing to strong internal demand, major infrastructure investment, and improvements in manufacturing output.” Moody’s forecasts GDP growth of approximately 4.7% for both 2014 and 2015.

Moody’s also applauded healthy systemic asset quality with banks opting for, “…lower-risk commercial lending, and secured consumer credit.” Mortgages comprise just 9% of Colombia’s total credit volume, thus well below developed markets, where for example, the US has a 40% print. “Moreover, organic loan growth has decelerated this year and will likely remain in the 10-15% range in 2015, minimizing risks to asset quality and helping capitalization, which is weak in comparison to regional peers, partly because of the recent spate of acquisitions.” This said, Colombia is on the cusp of giant infrastructural development to take shape, which in turn spells long-term financing requirements and the associated risk that entails.

In September 2014, Grupo Aval became the fourth Colombian company to be listed on the New York Stock Exchange (NYSE), intent on drumming up investor interest to the tune of $1.1 billion to recapitalize in the wake of acquisitions. According to Colombia Reports, since 2000 Colombia’s financial services sector has expanded by an inflation-adjusted 78%, in the process becoming the greatest contributor to GDP, at 18.78% in 2013. Moreover, a sustained growth trajectory has meant that local banks have come to command 75% of the domestic market. The natural outcome of such a saturated environment has been the need to expand the footprint beyond Colombia’s borders, where today they are collectively present in 21 Latin American nations. Indeed, Colombia Reports confirms that since credit went crunch in 2008, Colombian firms have acquired the assets of European banks throughout Latin America—to the tune of around $11 billion. The lion’s share (29%) belonged to Bancolombia, which has spent upwards of $3.2 billion in Central American acquisitions since 2010.

More encouraging has been the government’s fiscal policy and adept regulation of the financial market. Moody’s acknowledged these virtues with its upgrade of Colombia on July 28 2014 to Baa2 from Baa1, thus on par with Brazil. Thus, regulated by the Financial Superintendence of Colombia (SFC), the banking sector has remained resilient to the localized difficulties of the 1990s banking crisis and global turbulence.

Sector reform has made provisions for the concentrated nature of the banking system, its recent expansion beyond national borders, and consequent rise in risk. It has also worked to achieve international best practices and bring the fuller transparency characteristic of a more developed economy

Colombia’s financial sector evinces healthy corporate and retail balance sheets, credit quality, and profitability. For 2014 the bank capital to assets ratio was at 14.7%, while the bank nonperforming loans (NPLs) to total gross loans ratio was at a low 3%. The deposit interest rate, at 4.1% was down fractionally from 4.2% in 2013. And meanwhile for 2014 the domestic credit provided by the financial sector as a percentage of GDP was at 70.1%, while Mexico’s 49.5%, Peru’s 22% and Chile’s high 115.5% completed the print for Pacific Alliance countries.

The solvency ratio of 15% comfortably exceeds the 9% regulatory minimum, and moreover, since August 2013, has been in compliance with Basel III. In 2014 the system’s liquid assets to total assets ratio was at 8.1% up from 7.9% YoY and deposit to loan ratio at 96.3%.

Loan growth as of August 2014 was at 13.3% YoY according to official data, and is viewed as more sustainable than the +20% credit growth seen in 2012 given that Moody’s forecasts GDP growth of approximately 4.7% for both 2014 and 2015. Domestic credit penetration as a percentage of GDP lies in the middle of the range of Latin American countries. Bank credit as a percentage of GDP was at around 40%.

Consumer credit was seeing double-digit growth of 11.5% YoY, where interest rates on consumer loans averaged at 14.3%, down from 14.6% a year earlier. Asset quality was encouraging in the consumer segment where NPLs rose only 5% YoY standing just shy of 5%. Commercial credit accounts for 60% of overall loans, and is growing in step with the overall sector, on a YoY rise of 13.6%. The average interest rate on commercial loans was at 6.38%, compared to 6.22% a year earlier. Reflecting the system’s conservative stance toward risk, Colombia’s banks boast substantial provisions, with an NPL coverage ratio of 233% compared to, say, 165% in Peru. And meanwhile, the system is financial strength is confirmed in its Basel (BIS) ratio of 14%.

Grupo Aval is Colombia’s biggest banking group, and through its BAC Credomatic operations also ranks as the largest and most profitable banking group in Central America. The group is the 64.4% shareholder of Banco de Bogotá, and also has majority interests in the banking sector through Banco Popular, Banco de Occidente, and Banco AV Villas, yielding a one-third overall market share. The group’s robust consolidated data for 2014 printed a net income of $667.9 million and total net assets of $71 billion, while net interest income climbed 10.1% to $781 million for 4Q2014, vs. 4Q2013 up 3.8% QoQ. Total gross loans and financial leases climbed 16.8% YoY for 2014 to $4.5 billion on a 14.4% rise in commercial loans to $25.1 billion, a 19.3% rise in consumer loans to $13.3 billion, a 38.6% appreciation in mortgage loans to $3.6 billion, and a 6.3% climb in financial leases to $3 billion. A subsidiary breakdown of gross loan portfolio as of December 31, 2014, reveals 63.3% generated by Banco de Bogotá—strong retail focus, with over 11 million customers—18.8% by Banco de Occidente, 11.6% by Banco Popular, and 6.3% by Banco AV Villas. Meanwhile, for 2014 Banco de Bogotá represented 65.0% of total deposits, with Banco de Occidente on 20.4%, Banco Popular on 9.2%, and by Banco AV Villas on 7.4%. Local deposits were good for 76% and foreign deposits for 24%.

The largest foreign entity is BBVA, Spain’s second largest bank, holding roughly a 10% market share of total loans, consumer loans, total deposits, and checking accounts. Besides Colombia, the bank has prominent franchises in Argentina, Chile, Paraguay, Peru, Uruguay and Venezuela, with a smaller footprint in other regional markets such as Bolivia and Brazil.

Overall then, Colombia’s well-capitalized and soundly regulated banking universe seems set to perform well regardless of the noise.