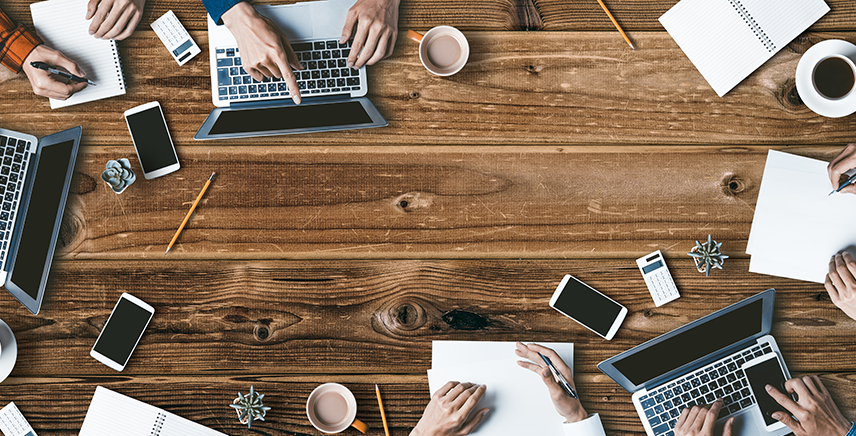 How We Do Business

The Linguistics of Trade

Share on:
From "paradigm shift" to "exit strategy," we take a look at the language of business and its pitfalls and clichés.

There is no denying that those who have a way with words are more successful in many walks of life, but nowhere is verbal dexterity as critical as in the world of business.

Since ancient times, conducting negotiations has been an indispensable part of doing business. Although the form of business negotiations has evolved over time, its essence has remained unchanged.

During Pax Romana and the Islamic Golden Age, traders would engage in serious business talk in the bazaars and marketplaces of Baghdad and Rome, much in the same way that today’s smartly dressed businesspeople do in chic offices.

Regardless of time and place, however, the most important means of negotiation has always been the same: words and the art of putting them together in an ever more persuasive manner.

In recent years, studies in linguistics have shed light on the workings of the art of discourse. There are a few simple linguistic tips that can help business negotiators and add to their persuasiveness and chances of success.

Empirical evidence has shown time and again that, in all language communities, people are drawn to those who speak with a neutral accent—the one often used by the aristocracy, the media, and the educated classes.

Having realized this point, top managers, businesspeople, and politicians, including a number of US presidents and British Prime Ministers, have sought the help of speech professionals to make a better impression in their meetings and addresses—for instance Margaret Thatcher as depicted in The Iron Lady and King George VI as depicted in The King’s Speech.

In the case of the English language, there are at least two standard frameworks of pronunciation: received pronunciation (RP) which is regarded as the standard pronunciation in the UK and some former British colonies and the General American accent (GA) which is common in North America.

In an experiment in the UK, an actor delivered the same lecture once in a regional or urban London accent and once using the RP.

The questionnaires filled in by the audiences of both lectures later revealed that the same individual was perceived as more knowledgeable, more convincing, and even more good-looking when delivering the lecture in RP.

If overdone, however, trying to have a better pronunciation can backfire and result in sounding pretentious. Just a generally correct pronunciation will make the right impression in business interactions, and unless you have a secret ambition to pursue a career in theater, there is no need to sound like someone else—say, a member of the British Royal Family.

Whether you speak English as your first language or you have learned English as a necessity for doing business in international settings, what you need to pull off is a clear and persuasive voice, free of markers of geography or social class.

The practical tip, if you speak English as a foreign language, is to learn the International Phonetic Alphabet (IPA) and get your hands on a dictionary which provides the correct pronunciation and stress pattern of each word.

If English is your mother tongue, however, you probably have an intuitive knowledge of the standard pronunciation of words even if you personally do not sound that way. You can practice by reading out loud or echoing lines uttered by celebrated voice actors, trying to get every single syllable, pause, and stress right.

Simply put, intonation is the melody of speech. The rising and falling patterns of our voice carries a great deal of information about our emotions at the time of speaking, and people’s ears are incredibly sharp at detecting such hidden information.

We make use of intonation on a daily basis in our communications. With the help of nothing except the tone of voice, people can easily determine the mood of a speaker—for example, cockiness, sincerity, or disgust—within a split second of hearing an utterance.

Indeed, drama students sometimes try to utter the same line over and over with different intonations, each time imparting a slightly different meaning.

As a business negotiator, you can work on your intonation by rehearsing your sales pitch out loud, while recording yourself and analyzing your own intonation later on. You should shoot for an intonation that exudes confidence, power, and earnestness and steer clear of bossiness, edginess, and—worst of all—self-doubt.

But, beware that, as in acting, sounding rehearsed in a business meeting is a fatal flaw.

The magic lies in sounding casual while in fact you have rehearsed your pitch a million times, and to accomplish this you need hundreds if not thousands of hours of experience.

Speaking in the right voice alone is not enough to make you a superb business negotiator; you should also say the right words.

In every sector, there are buzzwords—that is, words and phrases which have gone viral—whose correct and timely usage sends the message that one is an insider to the game.

For instance, “paradigm shift,” “mind sharing,” and “exit strategy” are a few well-known buzzwords from the field of corporate management that were making the rounds back in early 2010s. “Outsourcing,” “sustainability,” and “content marketing” are a few business buzzwords from the same period.

However, not all buzzwords are as overused as these ones, and some are only common within a specific community of practice.

Picking up the right buzzwords and peppering your business pitch with them can give you some edge by creating a sense of solidarity between you and your interlocutor.

The use of buzzwords, however, should be done in moderation and only when you, as a business negotiator, have a good knowledge of the subject-matter.

At the end of the day, there are no simple hacks to make a novice sound like a seasoned negotiator, and the art of negotiation, like every other skill, improves with practice and experience.