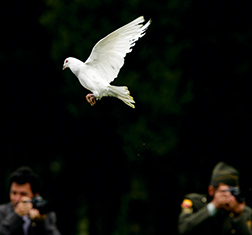 The Hunt for Blue October

Share on:
On certain days, whether rainy or full of radiant sun, one is forced to stay home and get one’s house in order before venturing out into the wider world. At […]

On certain days, whether rainy or full of radiant sun, one is forced to stay home and get one’s house in order before venturing out into the wider world. At certain historical junctures, the maxim seems to apply to nations as much as individuals: America in 1920, Britain in 1946, and China in 1958—however erroneously conceived at the time, each come to mind. Were this not the 21st century, 2016 would have unambiguously been that year for Colombia, a moment singlehandedly dedicated to domestic affairs in which the only foreign locale that mattered was Havana, the seat of the peace negotiations with the FARC.

Yet even in its most critical moment of domestic need, Colombia does not have the luxury of setting its diplomacy on the back burner. After all, the ongoing support and encouragement of the US, Cuba, and Norway was not just crucial to the legitimacy of the peace process; without the unwavering support of Uncle Sam, the deal has little chance of being enacted on the ground. And though peace must come from the hands, mouths, minds, and labor of everyday Colombians, it will be difficult to win without the support of international development agencies such as USAID, the UK Department of International Development (DFID), and the Norwegian People’s Aid, which are collectively making the unofficial downpayment on the storied “peace dividend“ expected to start paying out in the decades to come.

The US, for example, has already allocated USD450 million to Paz Colombia, while the Norwegian People’s Aid has dedicated USD22 million of a separate USD105 package solely aimed at demining efforts (to which the US contributed an additional USD36 million). Though this pales in comparison to the USD10 billion the US government shelled out on Plan Colombia, the anti-narcotics initiative that began under President Clinton but is now drastically ill-prepared to combat the surge in “post-peace“ coca-plant cultivation, it will still be critical to ensuring the minimum of job-training programs and other civil-society-bolstering methods are put into place in Colombia’s most vulnerable regions as guerrillas attempt to trade in their arms for CVs and cable TV.

Comparative numbers notwithstanding, the relationship with Colombia’s most critical partner, the US, still saw a preliminary scare in the early days of Donald Trump’s presidency. In keeping with the campaign’s promise of cuts to development spending across the board, US Secretary of State Rex Tillerson’s confirmation hearings were a source of frenzied concern in early 2017. Refusing to promise that the US State Department would honor President Obama’s fiduciary commitments to Colombia’s peace before a congressional hearing, Tillerson sent shockwaves through the country. Only when Trump promised to “personally take charge“ of seeing that US funds would find their way south of Santa Marta did Colombians (and various foreign donors) breathe a sigh of relief.

Nonetheless, in late April Trump announced plans to cut economic aid to Colombia by 20%, from USD133 million to USD105 million for the fiscal year beginning in October 2017. At least, optimists argue, this was the least severe cut to any country in Latin America outside Haiti, in percentage terms. Does this mean Trump has a soft spot for the country? Unlikely. If one looks at how much the Obama presidency had budgeted for economic aid to Colombia for the same fiscal year, USD187 million, the purported USD105 million in Economic Support Fund aid would represent a much heftier 44% loss. Then again, given that Trump is proposing that aid to Brazil, Venezuela, Cuba, Ecuador, Nicaragua, and Paraguay be cut entirely, Colombia comes out looking considerably better in comparative terms.

Whatever the case, the total cost of the peace deal is much higher. Valued at USD44 billion over 10 years, it will take more than a few friendly tweet exchanges with POTUS to secure the funding needed to address and combat what most agree are the root causes of the conflict. While in theory—and for various conservative factions, in practice—ruinously expensive, this figure only represents only 11.6% of Colombia’s total GDP in 2014 (USD378 billion), a figure that has admittedly taken a hit with the collapse in oil prices. But Colombia needs more than mere governments—it will also have to enlist the major economic organizations if it is to reach this vaunted figure.

Hence the Washington-based IMF’s promise in 2016 to extend USD11.5 billion in loans to Colombia over the coming decade to offset the “cost of peace.“ Earmarked for major investments in agricultural programs, infrastructure projects, and various macroeconomic stabilization efforts, the loan was increased from an original soft promise of USD5.4 billion once it became clear that the government’s fiscal balance had taken a turn for the worse since 2015. The EU has promised an additional USD80 million in grants toward the peace and another USD450 million in loans.

The various Roads to Prosperity

In addition to the peace deal and the fabled fiscal reform project, the goal of which is to offset the collapse in oil prices by increasing and rationalizing government revenues, the largest initiative of President Santos’ government has been the massive 4G infrastructure initiative designed to overhaul the nation’s notoriously poor network of roads. In merely a six-year period, 4G aims to construct nearly 5,500km of new motorways. According to Colombia’s National Infrastructure Agency, the project is expected to boost GDP by 1.5% solely during construction and employ some 180,000 people.

What might otherwise have been a purely domestic affair when oil was at USD140/barrel now redounds upon Colombia’s ability to dexterously negotiate diplomatic and financial arrangements with a variety of foreign powers. For starters, it is nearly impossible to do business without the Americans, though three of the top five banks financing 4G are Colombian—the single-largest lender is Goldman Sachs (USD1 billion) and the fourth largest is Japanese Sumitomo Mitsui (USD800 million). Given that the construction of these roads across a vast geographical network of mountain and jungle will be undertaken mostly as public-private partnerships with significant foreign backing, it will be imperative that the Santos government remain on excellent terms with the international community (which, if his Nobel Peace Prize in 2016 is anything to go by, will not be too much of an uphill struggle). Another crucial point in funding the 4G project was the 2016 sale of public utility Isagen to a Canadian firm for USD2 billion.

Somewhat ironically, one of the biggest criticisms of Trump’s Latin America policy is the risk it runs in undermining one of the few US foreign policy triumphs in recent decades: a negotiated end to the Colombian civil war. Though Colombians deserve the vast share of credit for the deal, the point is that not only the prestige of the Santos government is on the line; so too is the US State Department’s. Thus when it comes to projects like 4G, Colombia is right to strike while the iron is hot and get New York, Washington, Tokyo, London, and Geneva to contribute while the going is good. As has been stated many times over, the country’s ability to emerge from the sullied and sodden path of a half-century of civil war will be contingent on the government’s ability to connect Colombia’s vast, disparate, and variegated terrain to the developed parts of the country—and to one another.

Polka in the Pacific, but who’s behind the Music?

What of the view looking west? After all, one of the major footnotes to the 2016 presidential campaign and the ascendancy of Trump was the near-immediate scrapping of the Trans-Pacific Partnership. Though Colombia was never a signatory, its failure will still reverberate there. For one, it spelled a major setback in the solidification of a Washington-led Pazifik Gemeinschaft. With Uncle Sam now taking a giant step back in the region, many now see an opening for Beijing. The great question of 2017, then, is the extent to which it will attempt to seize it.

For starters, what will Beijing do to boost ties with the Pacific Alliance, the powerful trade bloc comprised of Colombia, Mexico, Peru, and Chile—a market some 217 million strong with an average GDP per capita of nearly USD16,000, half of Latin America’s exports, and 35% of the entire region’s GDP? Despite the bloc’s strong exports, China’s relationship with the Pacific Alliance pales in comparison to its imports from Brazil, Argentina, and Venezuela. Until the Chinese take to quinoa and corn tacos, it is the Atlantic rim of Latin America that will continue to dominate the Chinese appetite for commodities.

Yet the question is also one of politics. Though China is Colombia’s second-largest trading partner after the US, it extended almost no credit to Colombia in recent years (in contrast to Venezuela, whose fledgling government it lent USD65 billion, or Brazil, which received USD21.8 billion, or even little neighboring Ecuador, some USD15.2 billion). Rather, China has almost exclusively focused its “debt diplomacy“ on countries with at best very lukewarm ties to America. After all, each of the biggest recipients of Chinese aid were also the centerpieces of the continental “pink tide“ at one point or another (Venezuela, Brazil, Ecuador, Argentina). The question, then, is less “why the others“ than “why not Colombia?“

The answer, of course, is Plan Colombia and the locus of drug and class wars that have politicized so much of Colombia’s (Washington-leaning) foreign policy in the past five decades. Despite the disproportionate attention given to Colombia’s struggle against the FARC (and ELN and M19), one must remember that it is still the only country in South America that didn’t experience a single coup in the latter half of the 20th century. Apart from sheer “luck,“ much of this has to do with the close relationship the country enjoyed with the US throughout this same period. Arguably Washington’s strongest Cold War ally on the continent outside of Pinochet’s Chile, one must not forget that thousands of Colombians faithfully served in the Korean and Vietnamese wars. Thus, as the final “ideological straw“ keeping Beijing from doing real business with Bogotá now falls, 2017 will be a crucial year in determining the country’s second-most important relationship, which, until this day, has remained shrouded in mystery.