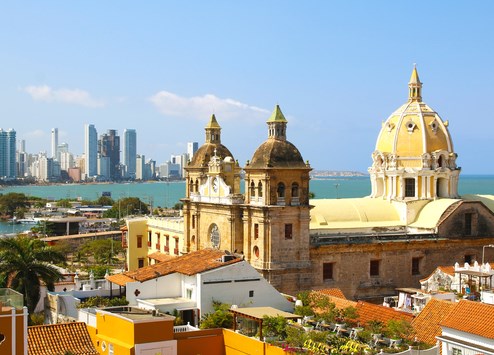 Share on:
Colombia is establishing itself as Latam's haven for high-end tourism and events, not least thanks to over USD90 billion of investment over the last decade and its mesmerizing natural splendor.

As the world’s classic travel destinations lose their charm, new tourist havens in emerging markets are turning the heads of the more fastidious travelers by offering them unique experiences and personalized packages. In 2018, luxury tourism accounted for around 7% of the global tourism market, and its growth outpaced that of regular tourism significantly, according to the Netherlands Enterprise Agency.

At the same time, an upper-middle class is being formed in many western and eastern countries that can afford upscale hospitality, dining, and some well-earned pampering. Countries with a so-called wow factor, ranging from Greece to Oman, have set their eyes on the potentials of high-end tourism as well as the inflow of cash coming with luxury travelers from source markets such as big European economies in the west, China with its emerging upper-middle class in the east, and—most obviously in Colombia’s case—the US.
Colombia, with its white sandy beaches and lush mountainous terrains, is claiming its share of the high-end tourism market. Since the turn of the century, luck has been on Colombia’s side, with the number of visitors to the country jumping three-fold since 2000. Once only visited by backpackers and daredevils, now Colombia’s deluxe hotels, fine restaurants, and classy boutiques are frequented by bon-vivants.
Quite frankly, Colombia has always had all the right qualities for turning into a high-end travel destination: natural splendor, a wealth of cultural heritage, and a collective sense of appreciation for life and what it has to offer. As such, rebranding the country and putting the nation’s tourism sector back in motion could not have been a colossal challenge.
Thanks to the peace process and the inking of a final agreement in 2016, drug-related crimes and violence have been diminishing in recent years, as international interest in the country has been growing, with notable amounts of foreign investment coming Colombia’s way. According to David Lightle, an expert on national rebranding who contributed to Colombia’s efforts to change the country’s old and not-so-unsavory image, the revival of Colombia’s tourism was kick-started in the early 2000s by persuading influential figures from the world of business and academia to pay a visit to the country.
Since then, Colombia has remained ahead of the pack in luxury business tourism, which forms around 25% of the high-end tourism market. Business tourism comes in many forms: taking care of the creature comforts of those professionals who are constantly on the move because of their jobs, hosting business gatherings, or even hosting academic conventions. The demand for all types of such services has been on the rise since 2018.
In March 2019, alone, Colombia will host over a dozen international summits, seminars, and symposiums on topics as diverse as cancer treatment, finance and banking, world business, bonds and derivatives, new energies, and literary studies. Some such events will be in Colombia’s famous Agora Bogotá Convention Center, and all of them will be attended by high-status figures, who are unlikely to spend their free time outside the event in discounted shopping centers, stay in budget hotels, and eat fast food.
Colombia’s growing high-end business tourism has risen to the occasion and is catering to the needs of such “bleisure” travelers, who do not mind mixing up their business visits with a healthy dose of leisure activities.
Whether people come to Colombia as bleisure travelers or pure pleasure-seekers, they need upscale hotels and resorts to stay. The hotel development in Colombia has been on the right track in recent years; in addition to independent deluxe hotels which have opened up in Bogotá, Cartagena, and Medellín, international franchises of luxury hospitality such as Conrad Hotels and Hyatt Hotels, have launched their classy hotels and resorts in the country.
Admittedly, Colombia still has a long way ahead to gain the upper hand in the Caribbean, which is teeming with long-established tourist destinations. However, Colombia, as a truly diverse and stable country with reliable infrastructure can provide its high-end tourism sector with unique selling propositions, which cannot be matched by small Caribbean island nations.