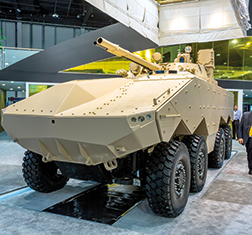 Share on:
The UAE is the world's third-largest defense importer; however, plans for an expanded domestic defense industry are in place.

Once a nation with a limited presence on the international military stage, the UAE, over the years, has become one of the most advanced military forces in the region, following acquisition of advanced weaponry, institutionalizing universal military service, and expanding its fleet of fighter jets and heavy vehicles.

Although with lower oil prices some regional governments have trimmed spending costs, defense and aerospace budgets have been maintained in the midst of wider regional security concerns. Recently, the UAE’s forces have played a part in a multi-nation Gulf Arab force fighting in Yemen, and have also been deploying F-16 fighter jets from bases in Jordan against Islamic State targets in Syria, marking a dramatic increase in its military offensives against threats to regional security. In fact, defense manufacturing has been one of the sectors targeted as a priority for the diversification of Abu Dhabi’s economy. Over the past 20 years Abu Dhabi’s Emirates Defense Technology (EDT) has been building up its military capabilities. In May 2016, Abu Dhabi’s EDT signed a deal with UK-based aerospace and defense company BAE Systems as a partner to develop mobile artillery. The agreement allowed EDT to use BAE Systems’ towed M777 155mm Lightweight Howitzer and a plan to develop a self-propelled artillery system; a UAE-made vehicle, EDT’s Enigma 8×8 Armored Modular Fighting Vehicle. The plan is part of a wider ambition to provide the UAE’s land forces with a wider variety of vehicles, giving forces the ability to carry out “fire-and-move” precision attacks. In terms of its navy, the UAE’s forces are also growing. Formerly an armed coastguard, today the force, following the successful Baynunah Corvette Program to build six ships, is a force to be reckoned with. The push for the navy has also helped develop local industry. Abu Dhabi Ship Building (ADSB) is the largest shipbuilder in the MENA region. The UAE’s Union Defense Force is the service primarily responsible for the defense of all seven Emirates and its home is in Abu Dhabi. The force is seeing a boost in numbers after national service was introduced in the UAE in 2014, now mandatory for Emirati men aged 18 to 30 and optional for women. Those with a high school education must serve for one year, and those without for a full two years. In March 2016, HH General Sheikh Mohamed bin Zayed Al Nahyan, Crown Prince of Abu Dhabi, Deputy Supreme Commander of the UAE Armed Forces, opened the Seih Hafair Camp National Service School, a fully-equipped facility for national service recruits. The whole sector is seeing a ramp up in activities and professionalism, with a growing industry to support the Emirate’s growing forces. Likewise, the development of Abu Dhabi’s aerospace industry has, for a long time, been seen as a key diversification policy. In 2002, the government of Abu Dhabi established Mubadala as a principal agent to drive economic diversification. The company today has a wide portfolio of products serving the aerospace industry and plays host to the Global Aerospace Summit. Strata, one of Mudabala’s subsidiaries, won a contract last year to manufacture Airbus 1350-1000 flap support fairings until 2023, and in December 2015 Mubadala Aerospace and Abu Dhabi Airport Company announced it was building the Nibras Al Ain Aerospace Park to serve the services and manufacturing needs of the sector. The park takes up 25sqkm and is expected to act as a catalyst to develop the aerospace value chain, with over 20 industrial plots available for lease. At the Abu Dhabi Global Aerospace Summit in 2016, speakers from the UAE reiterated the UAE’s deep and lasting commitment to the industry, and planning in terms of decades rather than months or years. The summit itself is under the patronage of HH Sheikh Mohamed, himself a lifelong soldier. He graduated from the UK’s Royal Military Academy at Sandhurst and served in the UAE’s special forces as a helicopter pilot before becoming head of the air force and then deputy supreme commander of the armed forces in 2005. The last decade has seen extraordinary developments in aerospace technology, and as delegates at Abu Dhabi’s Aerospace Summit 2016 noted, that has been driven by international partnership and collaboration. There is a drive to push innovation and train young Emiratis, and bring in the next generation of defense and aerospace professionals.