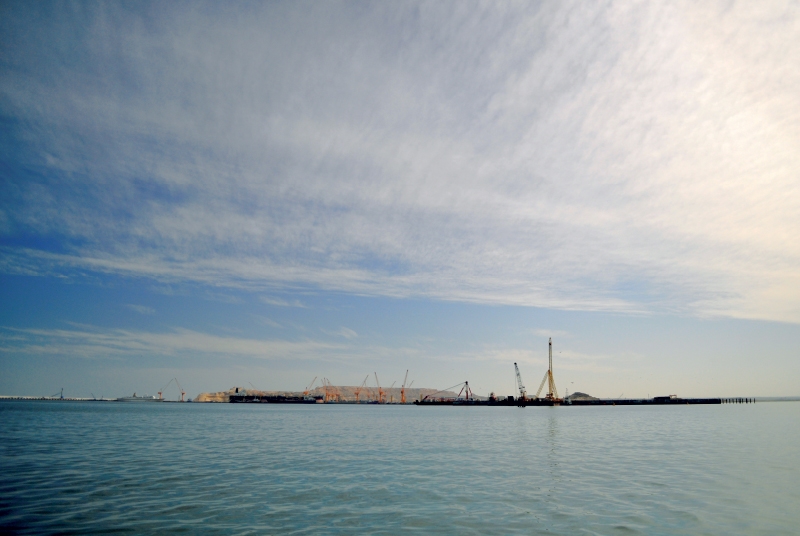 Share on:
The massive amounts of investment pouring into Duqm are set to make the city a major international player when it comes to trade and industry.

One of the main developments of the megaproject is that of the Port of Duqm. The aim is to turn the port into a major transshipment hub as well as one of the main import/export terminals for the Sultanate. The development of the port is planned to take place over a number of stages under a joint venture scheme between the government and the Port of Duqm Company. The port hopes to serve some of the largest vessels plying the seas with an approach draft of 19 meters, and an 18-meter draft along the berths. Commercial activity began in March 2013, with the township of the port expected to be finished by the end of 2014 and the liquid jetties by 2017. The port also hosts a world-class ship repair yard managed by Oman Drydock Company, which will be able to service any of the vessels that make port. The final vision of the port is that it will host a number of different dedicated terminals, including for general cargo, containerized cargo, liquids and petroleum, and bulk commodities. By 2015, there will be a 2.2-kilometer-long commercial quay fitted out with state-of-the-art facilities with the provision in Phase II to add a further 10 kilometers of commercial berths. Depending on demand, the additional berths will be either for general, container, liquids, or bulk cargo. There will also be an exclusive quay wall dedicated to the Royal Yacht, the Royal Oman Police Coast Guard, the Royal Navy of Oman, and the Sultan’s Special Forces, which will come into service in late 2014.

The general cargo terminal consists of a 300-meter commercial quay and was officially inaugurated in 2013, which effectively signaled the launch of operations and the port. The container terminal currently has 1.6 kilometers of quayside and the capacity to handle 3.5 million TEUs per year. The liquids and oil terminal is currently up for tender with the project to come online in 2017. The new terminal will be 3 kilometers in length and will be expected to deal with all the imports and exports of the new oil refinery planned in Duqm, which will have a production capacity of 230,000 barrels per day. The terminal will also cater to the needs of the petrochemical industry and tank farm planned for the adjoining special economic zone (SEZ). The port will provide a major boost to the jobs market and employment with the creation of an expected 15,000 direct and 30,000 indirect jobs related to the port.

While the port is a major part of the development of Duqm, another major project will be its refinery. The project is being undertaken by the Duqm Refinery and Petrochemical Industries Company, which is a joint venture between Oman Oil Company and International Petroleum Investment Company of Abu Dhabi, with both companies having a 50% stake in the joint venture company. The refinery will require an investment of $6 billion, with an associated petrochemical complex planned for a later date adding a further $9 billion to the total investment in Phase II. The refinery has been designed with the latest technology in hydrocracking, hydroheating, LPG treatment, kerosene treatment, and sulfur recovery, as well as utilizing delayed coking technology for bottom of the barrel processing. An invitation to bid for the key engineering, procurement, and construction (EPC) will tender in 2Q2015, with the contract being awarded in 2016. The plant will hopefully come online toward the end of 2018 and should be running at full capacity by the end of 2019. Government entities are all on board to provide the necessary service support with Oman Gas Company laying a pipeline to provide the facility with natural gas from its fields in Saih Nihayda in Central Oman. The 230-kilometer pipeline will have a diameter of 36 inches and have a capacity of 25 million cubic meters per day. Central Utilities Company will develop the indispensable seawater intake facilities so that the plant can run in a safe manner. Finally, the Special Economic Zone Authority at Duqm (SEZAD) will build all the necessary infrastructure required, such as roads, drainage, and coastal protection, among other things, allowing the efficient construction and running of the refinery. The Oman Oil Company is also planning to build the largest oil storage facility in the world to help support the plant and the petrochemical operations. The facility will have a total capacity of 200 million barrels, dwarfing the current largest in Cushing, US that only has a capacity of 62 million barrels. The $1 billion project will play a huge role in the international oil markets as it will provide safe storage and export capabilities external of the potentially volatile waters of the Gulf. The UAE has already began to bypass the Strait of Hormuz by building a pipeline to the Indian Ocean via the Emirate of Fujairah, and Saudi Arabia has begun using the Red Sea much more regularly to export its oil.