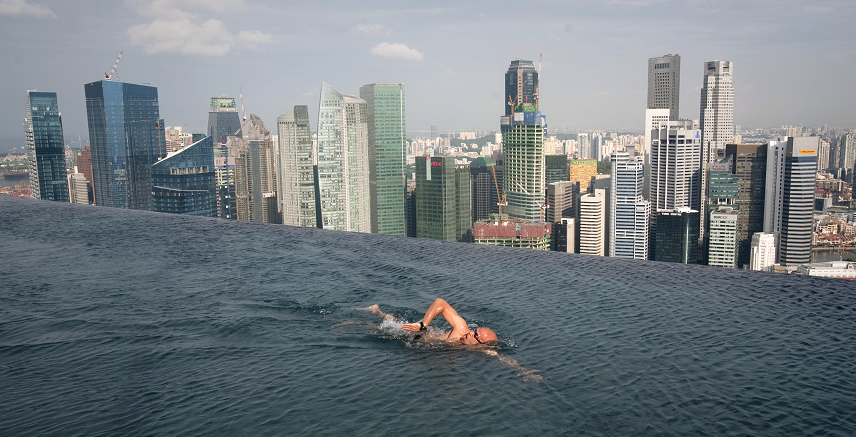 A Tale of Two Ports

Share on:
The tiny nation of Singapore has been engaged in a dispute over maritime territory with the not-so-tiny state of Malaysia for the last 40 years, and now things are heating up.

A guest swims in the infinity pool of the Skypark that tops the Marina Bay Sands hotel towers in Singapore June 24, 2010. REUTERS/Vivek Prakash

Tensions are rising between the leadership of Singapore and Malaysia over a small but important maritime area which both countries claim as their own.

In October 2018 Singapore announced its intention to alter the route used by pilots landing at its northeastern Seletar Airport.

The airspace over south Johor had been given to Singapore under a regional agreement in 1973, with the participation of Malaysia.

But the Malaysian minister claims the change in flight paths will “stunt development,” while Singapore claims it will make airspace management and aircraft landing safer.

In response, Malaysia announced it was going to extend the limits of Johor port to waters that Singapore claims as its own. On November 11, Malaysia issued a circular informing vessels of the new port limits, and Singapore issued a protest and its own port circular instructing vessels to ignore Malaysia’s claims.

This dispute has been long in the making, however.

The boundaries between Singapore and Malaysia were first defined in 1927 in an agreement between Britain and the Sultanate of Johor. That agreement eventually led to a treaty signed by both governments in 1995.

The problem is that the document wasn’t actually that precise, leaving a small patch of water between the borders of Malaysia, Indonesia, and Singapore undefined, which is where a 1979 map promulgated by Malaysia and rejected by Singapore came into play.

After much protest and a period of rising tension, Malay officials have stated that they intend to deescalate the situation with talks, but, to Singapore’s annoyance, they have not agreed to stop sending vessels to the area as part of the port expansion.

Talks on the issue are expected to take place by mid-January.