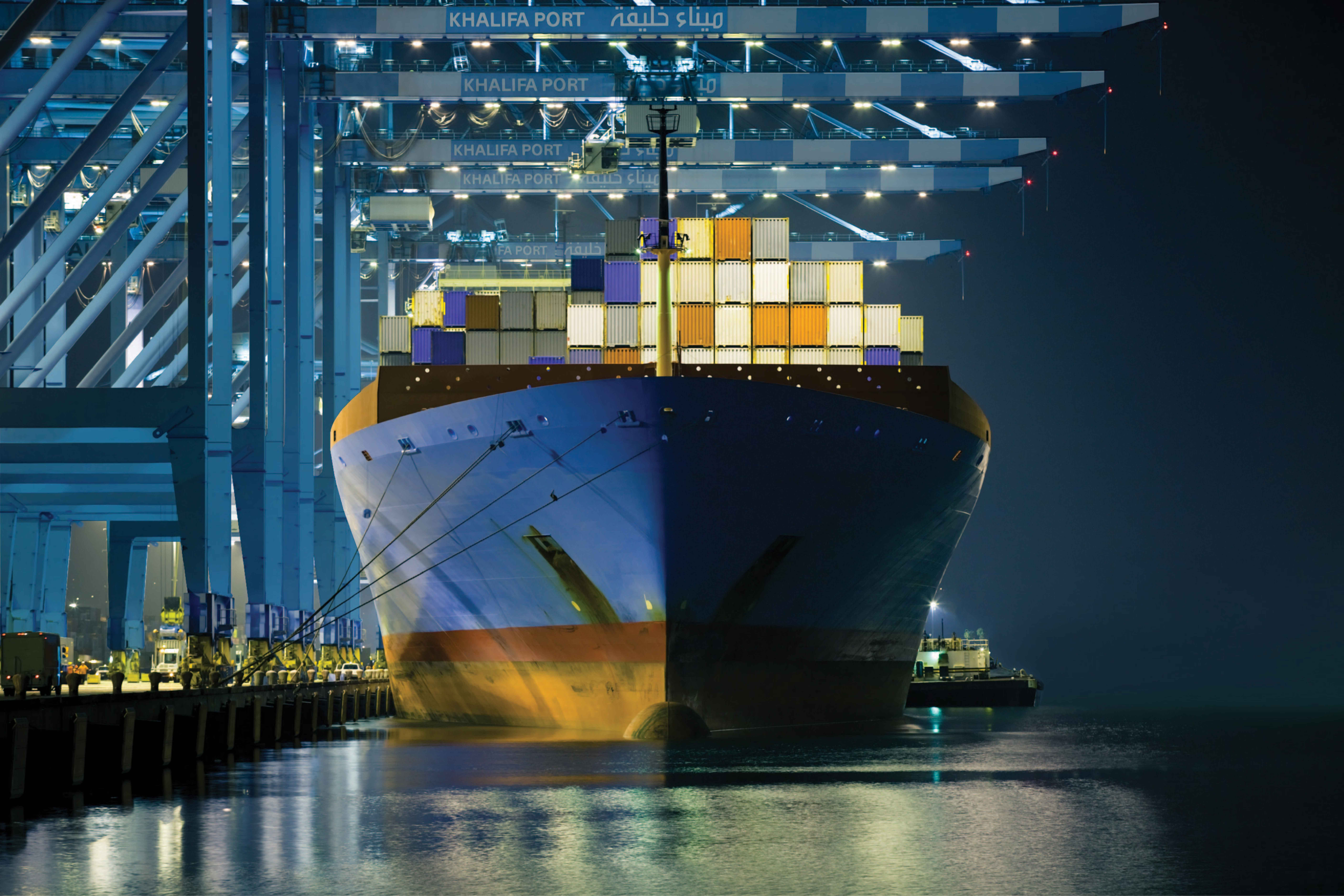 Share on:
While the economy accelerates back up to speed, the transportation sector is also moving faster and more efficiently to reach targets in 2021 and 2030.

Abu Dhabi has long been a central hub in the GCC, complemented by other major transportation centers, yet also actively contributing to an increase in passenger and cargo traffic in the region. The Abu Dhabi Ministry of Transport highlighted the Emirate’s massive potential in 2008 with the creation and development of a detailed transportation master plan and implementation program for the city of Abu Dhabi and the rest of the Emirate. Titled the “Abu Dhabi Surface Transport Master Plan” (STMP), the project is today comprised of a comprehensive set of policies and plans for the transportation sector, incorporating everything from road infrastructure to sea and airport development. As part of the plan’s mandate, the STMP features crossover with the Urban Structure Framework Plan of Abu Dhabi, created under the vision of HH Sheikh Khalifa bin Zayed Al Nahyan, President of the UAE and Ruler of Abu Dhabi, which was designed as a long-term vision for 2030. Like the overarching framework plan that guides the Emirate’s future vision, the STMP aims to establish a multi-integrated transport system of regional and metro rail, public bus transportation, and improved highways by 2030.

However, with 2015 and 2016 marred by low oil prices and slow speed of development, many of the transportation megaprojects have been either slow-moving, stalled, or completely on hold for the past two years or more. As oil prices show signs of recovery, 2017 signals the start of a new wave of growth for Abu Dhabi’s transportation sector.

One segment of the transportation sector that has remained unaffected by the fluctuating hydrocarbon market is maritime transportation. Abu Dhabi Ports is a conglomerate that operates 11 ports around the Emirate, the largest and most impressive of which is Khalifa Port, a state-of-the-art deepwater project worth USD7.2 billion. Since it was completed in 2012, the port and the neighboring Khalifa Industrial Zone Abu Dhabi (Kizad) have revolutionized not only Abu Dhabi’s transportation sector, but also the economy as a whole.

With forecasters estimating that Abu Dhabi’s ports could account for up to 15% of the Emirate’s GDP by 2030, the marine transportation segment is a focal point for investment, business, and logistics companies. Abu Dhabi Ports reported that the country’s ports already contribute more than 3% to non-oil GDP, a figure growing every year.

In an interview with TBY, Capt. Mohamed Juma Al Shamisi, CEO of Abu Dhabi Ports, explained, “2016 reflected a 152% increase in our net profit, 15% increase in revenue, our customs contribution raised up to 70%, and a 90% increase in our earnings before interest, taxes, depreciation and amortization (EBIDTA).” The company handled 1.6 million TEUs in 2016, reaching a total of more than 5 million since operations at Khalifa Port began in 2012. It was also a record year for general cargo and bulk, with 17 million tons passing through one of the Emirate’s ports over the course of the year. In terms of passenger numbers, Abu Dhabi’s ports welcomed more than 260,000 cruise voyagers in 2016.

Construction continues on warehouses in Kizad, where 64 additional facilities are being established for a large client base. In an effort to attract a wider pool of customers, Abu Dhabi Ports is not only expanding its territory and warehousing options, but also signing major international agreements. Notably, the company is combining efforts with Chinese logistics giant COSCO, which announced in 2016 that it would take steps to make Khalifa Port its local hub in the region. The move is estimated to add approximately 3.6 million more TEUs per year to the port’s operations. Additionally, Abu Dhabi Ports is prepared to accommodate up to 20 more logistics providers once developments in Kizad are complete, with 12 slated to arrive in 2017. “Khalifa Port is fairly new with just about four years of operations, but it has already stirred high demand,” Capt. Juma Al Shamisi said. “We recently expanded it by 1km and are also deepening the channel and the basin from 16.5m to 18.5m to cater for the biggest ships trading the world today and the foreseeable future.”

Behind the scenes, Abu Dhabi Terminals (ADT) manages and operates Khalifa Port. 2016 proved to be a boom year for the company, which saw a notable improvement in the cost of logistics, transit times, and ease of doing business. “We have also been able to triple our business from 2010 to 2016, which reflects a positive impact from a local perspective. We have created a number of interesting jobs for the local labor market, we introduced state-of-the-art technologies, and have also hired a growing number of locals into our daily operations,” Martijn Van den Linde, CEO of ADT, told TBY. The key exports from the hub were polymer steel, aluminum, pharmaceuticals, food processing, and copper. Commodities have driven growth on the export side in recent years, but local players like ADT see regional logistics as a way to add value to the economy. “Abu Dhabi is well positioned to play to its strengths, its industrial-oriented exports, and the lower rate of fast-moving trade you see in other GCC markets. Right now, the key for us is to find new markets and ways to differentiate ourselves to keep growing,” Van den Linde concluded.

Recent expansions in November 2016 saw Kizad expand its capacity by 25%. As part of the expansions, new equipment at the port includes advanced ship-to-shore cranes, 10 shuttle carriers, and 10 additional automated stacking cranes. In 2017, the Khalifa Port will boast the capacity to handle 2.5 million TEUs per annum.

Nearly 2 million passengers arrived in Abu Dhabi in February 2017, registering a 2.5% increase YoY. In particular, Terminal 3 at the airport registered over 26% growth in passenger traffic and a 29% increase in flight traffic over the same period. Passenger numbers from Saudi Arabia grew significantly by over 13%, largely due to the opening of new routes from Saudi Arabia-based Flynas. Saudi Arabia is currently the second-most popular destination for passenger traffic passing through Abu Dhabi International Airport. Meanwhile, incoming and outgoing UK passenger traffic grew 10%, attributed to the addition of a the third daily Etihad A380 flight that has boosted flight traffic between Abu Dhabi and London by over 21%. These figures are all set to increase with the opening of the Midfield Terminal in January 2019.

Originally scheduled to open in 2017, developers at the Midfield Terminal at Abu Dhabi International Airport announced in 2016 that the project would be delayed. However, according to recent media reports, progress is beginning to pick up once again, with work ongoing at the airport. Currently, Abu Dhabi International Airport can handle 62 aircraft at once. When the new terminal is opened, the airport will have 65 gates in total, with the capacity to handle over 141 planes simultaneously and supported by a cutting-edge technical systems and facilitated by Turkish airport operator TAV. The budget allocated for the Midfield Terminal has already exceeded AED19.1 billion, out of a potential AED38 billion set aside for the expansion and development of the entire aviation sector. The new terminal will also increase the airport’s capacity to 45 million passengers per year. With six levels in total, the new terminal will include a hotel, extensive retail space, and dozens of restaurants upon completion.

Abu Dhabi’s aviation development plans are not the only initiatives in the transportation sector that have faced serious setbacks. Plans for a region GCC network and an Abu Dhabi Metro are all but on hold since first being proposed in 2009 and 2010. However, local committees are focused on analyzing where the projects stand in order to set reasonable targets and get development back on track in time to meet the goals laid out in Vision 2030.

Currently, the deadline for the GCC rail network has been moved back three years to 2021, according to the Ministry of Infrastructure Development. Although the original target date of 2018 is no longer possible for the authorities, Abu Dhabi is committed to achieving its portion of the plan, regardless of how the other countries involved proceed, in large part due to the fact that the UAE seeks to have its own internal rail system in place by 2021.

Etihad Rail has been tasked with developing the AED40 billion, 1,200km network. The first stage, which included the first 266km of the line, has already been used to transport over 5 million tons of sulfur from Shah and Habshan to the port of Al Ruwais for Abu Dhabi National Oil Company (ADNOC) for export. The second stage comprises 628km of railway that will link Khalifa Port and Jebel Ali to the border with Saudi Arabia at Al Ghuwaifat and the border of Oman at Al Ain.

Within the Emirate itself, there are plans to implement 131km of metro and light rail lines. The plan, which was outlined in the STMP, stipulates a first phase of 18km between Zayed Sports City in the south of Abu Dhabi island and Mina Zayed to the north, 5km underground and 13km on the surface. However, the project has received limited funding since 2012, and development is on hold.

AHEAD OF THE CURVE

While Abu Dhabi Metro lines hang in limbo, other potential public transportation options have come into view. One of the most innovative designs to be considered is the Hyperloop system proposed to run from Abu Dhabi to Al Ain. In December 2016, the DOT announced that it had signed an agreement with Hyperloop Transportation Technologies to carry out feasibility studies for the project. At the same time, another feasibility study is already being conducted in partnership with the Roads and Transport Authority (RTA) in Dubai for a similar Hyperloop-type project that would connect Dubai and Abu Dhabi. With the possibility of traveling at speeds of up to 1,200km/h, the Hyperloop system is a passenger and freight transportation method that propels a pod-like vehicle through a near-vacuum tube at great speeds. With high-tech solutions appearing on the horizon and development of traditional public transportation at a standstill, Abu Dhabi could have the opportunity to be a pioneer in the region and world with the latest innovation.