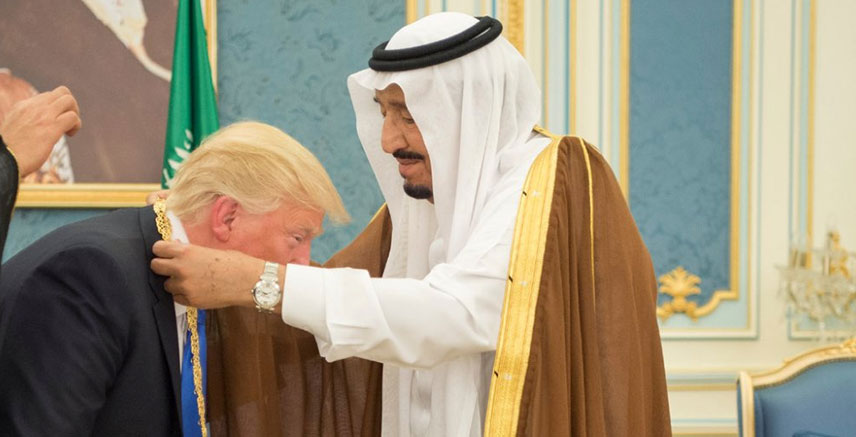 Saudi in spotlight after Trump visit

Share on:
President Trump left his meeting with Crown Prince HRH Mohammed Bin Naif remarking it had been “a tremendous day for investments in the United States."

Under the slogan ‘Together we prevail,’ Trump’s decision to make Riyadh the primary stop on his first overseas trip as president was a statement of intent regarding the Middle East, placing it at the core of his administration’s foreign policy and establishing Saudi Arabia as its most valuable and trusted partner.

For the Kingdom’s part, this was an opportunity to lead the region, bringing together heads of state and representatives from 55 Islamic nations.

Art of the Deal

Not long after Trump’s Air Force One landed on Riyadh’s tarmac it had become clear that the visit would introduce an unprecedented, sector-wide economic package, and that the proceedings would be as much
about numbers and action as they were about the strong rhetoric. On May 20, the CEOs of over 50 leading US companies, 40 Saudi firms, and nine other businesses from key international markets, convened at Riyadh’s Four Seasons Hotel for the Saudi-US CEO Forum.

The highlights from the event involved a number of private-sector partnerships, including a USD15 billion MoU from General Electric (GE), a USD3.6 billion deal with Honeywell, and a USD2.8 billion venture with Texas-based EPC provider McDermott, to support Saudi Aramco’s widespread localization efforts and the development of SMEs throughout the Kingdom.

Yet nothing echoed louder than the USD110 billion deal the two countries signed in the defence sector. According to the US State Department, the agreement is effective immediately and falls into five broad categories: air force modernization; air and missile defense; border security and counterterrorism; maritime and coastal security; and cybersecurity and communications upgrades.

This also included a ‘letter of intent’ to assemble 150 Lockheed Martin Blackhawk helicopters in the Kingdom, at a value of USD6 billion. Even more spectacularly, however, the two countries secured an additional USD350 billion agreement over the next 10 years, making it the biggest arms deal in history.

Little wonder, therefore, that President Trump left his meeting with Crown Prince HRH Mohammed Bin Naif remarking it had been “a tremendous day for investments in the United States.”

There was also a clear strategic tone to these dealings. On the closing day of the event, HRH King Salman bin Abdulaziz, chaired the Arab-Islamic-US Summit, aimed at combating extremism, terrorism, and achieving regional peace. Speaking on behalf of the leaders of 55 Islamic nations and the US President, the Custodian of the Two Holy Mosques explained “as part of our war against terrorism, we confirm our determination to wipe out Daesh organization and other terrorist organizations, regardless of their religion, sect, or thoughts.” Participants agreed upon the ‘Riyadh Declaration’ which will form a reserve of 34,000 soldiers from across the region to combat terrorism.

The spectacular arrival of President Trump to Riyadh served as a most welcome rejuvenation of US-Saudi ties, following years of uncertainty during the Obama administration.

However, perhaps even more importantly, it opened up a new chapter in the Kingdom’s efforts to reach out to other Arab and Islamic nations. As witnessed earlier in the year with HRH King Salman’s month-long Asia trip, the country has been actively forging expansive, diversified foreign relations, from Indonesia in the east to Washington in the West. Yet, closer to home, many parts of the Arab world remain in sociopolitical turmoil.