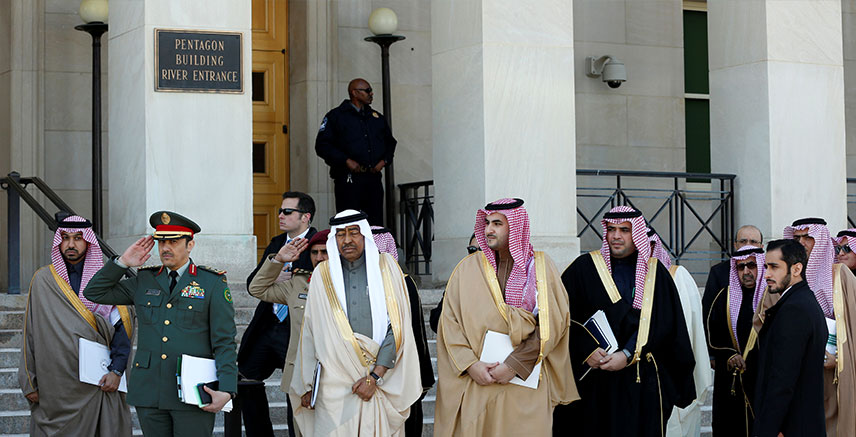 Share on:
As a result of this deal, Saudi Arabia will be on track with its plans to train new high-skilled workers to foster this industry.

Members of Saudi Arabia’s delegation wait during a welcoming ceremony for Deputy Crown Prince and Minister of Defense Mohammed bin Salman at the Pentagon in Washington, U.S., March 16, 2017

A central component of Saudi Arabia’s Vision 2030 is the reduction of the Kingdom’s dependence on oil through the stimulation of the local economy.

Among the many sectors that the nation wants to boost is the defense industry. Currently, Saudi Arabia is the fourth largest military spender in the world, but just 2% of this budget is spent within the Kingdom.

As a matter of fact, Saudi Arabia is the second country by military expenditure-to-GDP ratio, according to the Stockholm International Peace Research Institute (SIPRI). One tenth of its annual GDP is spent on strengthening its armed forces.

In 2016 alone, the country spent USD63.7 billion on defense, an amount that is approximately six times what the Mecca-Medina high-speed railway is set cost.

Experts on international relations explain Saudi Arabia’s heavy spending on defense in comparison to other countries in the Middle East by reminding that its large area and relatively low population require more resources to defend its borders.

Its extensive deserts and barren territory make the country vulnerable to foreign invasion, especially with the growing threat to its national security posed by ISIS in Iraq, while oil revenue allows the Kingdom to make such massive arms purchases as that signed with the US last week.

But this deal does not mean that the US will be shipping some finalized missiles or jets into Saudi Arabia. The agreement is instead focused on bringing defense technology and job training into the Kingdom, to achieve the stated goal of allocating 50% of military spending to domestic producers by 2030.

As a result of this deal, Saudi Arabia will be on track with its plans to train new high-skilled workers to foster this industry, which to date remains relatively small at just seven companies and two research centers.

Despite these goals, and the country will clearly remain an important customer for US arms in the near term.

“We are absolutely confident the strong alliance between Saudi Arabia and the US will remain strong, and that we will continue to support each other in security and defense matters for many years to come,” stated Walid Abukhaled, CEO of Northrop Grumman in Saudi Arabia, in a recent TBY interview.

In the same interview he also noted that because the US is “undoubtedly” the most advanced country in defense technology, it is “extremely positive” that trade between both nations remains at “the highest” level possible if Saudis are to stimulate their own industry.

In this way, Vision 2030 offers an unprecedented opportunity for foreign investors to partner with the government and local industries to help transfer expertise and technology.

Alongside healthcare and education, the Saudi government sees defense as a self-sufficient industry that will benefit other industries such as information technology, communications, and manufacturing.

“We will build an integrated national network of services and supporting industries that will improve our self-sufficiency and strengthen our defense exports, both regionally and internationally,” declares the Vision 2030 document.

If these goals are achieved, Saudi Arabia will not only have one of region’s dominant armies, but will also become a regional exporter of the defense industry.