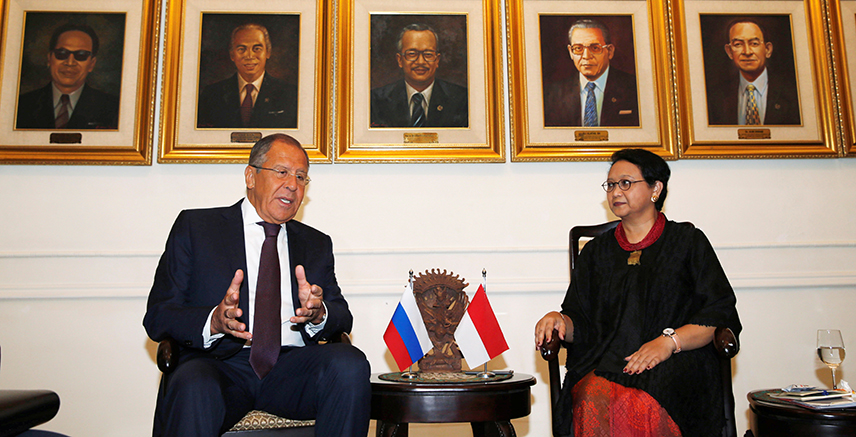 Fighter jets for a cup of joe

Share on:
In a creative response to western sanctions, one on weapons and the other on certain agricultural products, Russia and Indonesia have struck a deal bartering fighter jets for coffee and palm oil.

To walk the evening may be the most ancient profession in the world, but if we are to believe Aristotle, barter predates the payment of coin by millennia.

As far as Russian-Indonesian relations are concerned, Western sanctions have now driven both countries to embrace the ancient method of exchanging-in-kind.

Valued at USD65 million per jet, the fleet of eleven would net Moscow a cool 500 million pounds of coffee at the going rate of USD1.43/pound, enough to keep Russians caffeinated for just under a year,[1] were that the only commodity on offer.

With coffee consumption in Russia on the rise—from a market worth barely USD750 million in 2001 to over USD2.5 billion today, according to the Russian Association of Tea and Coffee Manufacturers—the country’s craving for a cup of joe could be compensated for merely one Sukhoi Su-35 jet per month.

The move came barely a week after the US and EU slapped further sanctions on Russia for its 2014 recapture of Crimea and alleged interference in the 2016 US presidential elections.

Quick off the mark, Indonesian Trade Minister Enggartiasto Lukita immediately saw an opportunity to revive a trade relationship with Russia that had been stagnant for some time. He also said the move could lead to further deals in energy and aviation down the road.

Not that such swapping is unique. As the International Reciprocal Trade Association (IRTA) estimates, some 30% of global trade is done on the basis of barter.

From the famous USD65 million deal in which Mercedes-Benz once bartered buses for bananas, or when Pepsico offloaded its cola for Stolichnaya vodka, the world is ripe with tales of material tit-for-tat when fiat currencies wouldn’t suffice—the UN’s Oil for Food program in Iraq arguably the most famous of all.

What’s unique in this case is the curious overlap the barter has with recently imposed western sanctions, on the one hand, and fears that Pax Americana and its maritime quasi-monopoly of force may be receding, on the other.

Though details of the barter were announced on the eve of Russian Foreign Secretary Sergei Lavrov’s visit to Jakarta on August 8, the deal was part of a larger series of military purchases between the two countries that date back to when Jakarta purchased its first Sukhoi jet from Russia 14 years ago.

At the time, US sanctions on weapons sales to Indonesia, which lasted from 1991-2006 and came in the wake of the East Timor crisis, forced it into bed with the world’s second-largest weapons manufacturer, Moscow.

Despite the lifting of sanctions by George W. Bush in 2006, Indonesia has also been in talks with Russia to purchase at least two Kilo-class submarines since 2007.

Not without reason. Already the world’s fourth-largest trading block after the EU, US, and China, the Association of Southeast Asian Nations (ASEAN) has grown at breakneck rates in the past 20 years—and is predicted by the IMF to grow by another third before 2022 alone, to USD4 trillion.

Yet though heavily contingent upon its vital sea-lanes, this commercial explosion has hardly been accompanied by comparable military upgrades. Far and away the world’s largest archipelago, Indonesia’s navy only has two active submarines, one German and one South Korean, a number it hopes to increase to 10-12 by 2024.

If the US cannot or will not meet this demand—and the Chinese, who have the world’s second-largest navy and pose the single biggest threat to Southeast Asian sovereignties, surely won’t—it falls on Russia, a country arguably over-reliant upon weapons sales, to do so.

A greasing of the palms

Weapons are far from the only side of this story. In the ever-swinging pendulum between the diplomacy of guns and butter, such are the times we inhabit that one is now bartered for the other. And by butter, of course, we mean palm oil.

Used predominantly for cooking oil, especially when religious or cultural restrictions prevent the use of animal fats, it is also a popular ingredient in the manufacture of soaps, detergents, greases, candles, and lubricants.

Now the world’s largest producer of palm oil, Indonesia is churning out 21 million tons of the stuff a year, a third of global output according to the US Department of Agriculture.

Though it can scarcely knock down its forests fast enough to meet ever-increasing global demand, in response to which global production grew by 7% alone between 2015 and 2016, this year saw the first major legal setback to the palm oil industry beyond the sphere of civil society.

In April 2017, the European Parliament passed a measure aiming to limit the import of palm oil and other products (beef, soy, cocoa, rice, timber, maize) that have caused deforestation.

Though not binding, the measure calls for new sustainability criteria for any palm oil products reaching the European market.

But palm oil is far more efficient than its many equivalents, producing up to eight times higher yields per acreage than soy, rapeseed, or sunflower—not to mention the fact it now employs millions in its cultivation.

You’ve got a friend in me

As long as Strasbourg continues in this vein, Indonesian growers will have a market in Moscow, no matter the method of payment. As ever the old adage avows: my enemy’s enemy is my friend.

Such are the paradoxes of western sanctions, and the curious new camaraderies they give rise to. But who knows how long they will last.

Should Trump make good on his ambivalence to Russian ‘meddling’ and the ruble ever recover, Muscovites may have enough to ditch the Indonesian palm oil and make for Danish butter.


[1] At the current rate of 1.7kg/person, Russians consume 542 million pounds of coffee per year.