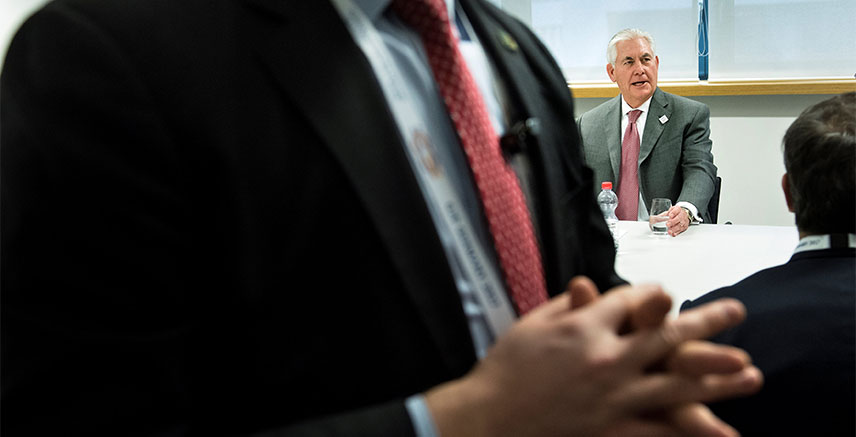 Rumba on the Rhine

Share on:
In his first trip abroad as Secretary of State, Rex Tillerson tows a delicate and ambiguous line between courting Russia, preserving the transatlantic alliance, and answering to the interests of the American people.

Rex Tillerson representing the US at the G20 in Bonn

In his first trip abroad as the American Secretary of State, Rex Tillerson traveled to the old West German capital of Bonn on Wednesday night to attend this week’s G20 conference. Traveling with no deputy and a barebones diplomatic team, he still brought the great elephant that’s been keeping statesmen, journalists, and strategists of every stripe awake at night: the question of whether or not the US still stands by its friends and the postwar order it created on the ashes of Nazi Germany.

For the pessimists out there, at least the venue for Tillerson’s first official port of call beyond the Beltway was reassuring.

Whereas Colin Powell’s first trip was to Mexico and Hillary Clinton’s to Japan, the timing of Tillerson’s rumba on the Rhine should somewhat console the multilateralists who still believe in broad consensus-based alliances. What’s more, only the Seattle-Genoa cartel and their German surrogates, die Linke (the Left Party) and the Germany Communist Party, showed up to protest.

As far as the rest of the G20 is concerned, two questions loomed: will the Texan protect the transatlantic alliance with all its Baltic appendages? Or will he nudge ever closer to Russia, a country and people with whom the secretary is deeply intimate after decades in the oil and gas industry?

If his meeting with Russian foreign minister Sergei Lavrov on Thursday February 16 was anything to go by, the status quo ante still stands.

For one thing, Tillerson’s first foray into the world of foreign diplomacy comes just on the heels of the Trump administration’s largest blunder yet: the shame-ridden resignation of National Security Advisor Michael Flynn for holding undisclosed talks with the Russian ambassador before Trump took the oath of office. Considered the most pro-Moscow of the president’s inner circle, his canning on Monday set reconciliation with Russia back a few crates.

The time, then, to end sanctions—the presumed subject of Flynn’s talks with Ambassador Kislyak—has yet to come.

While Tillerson told reporters he could work with Russia “when we can find areas of practical cooperation that benefit the American people,” he kept to the ‘America first’ doctrine most forcefully enunciated during Trump’s inauguration speech. “Where we do not see eye to eye,” he ambiguously warned, “the US will stand up for the interests and values of America and her allies.”

Stressing the importance of Russia keeping to the Minsk II agreement, which calls for the demilitarization of the war in eastern Ukraine, Tillerson towed a delicate if still ambiguous line between courting Lavrov, preserving the transatlantic alliance, and answering to the interests of the American people.

Perhaps the oddest thing about his German escapade is that he nearly made it alone. With neither a deputy nor a team of senior diplomats—the majority of whom were politely axed in January—he and his chief of staff, Margaret Peterlin, a Chicago-trained lawyer and former U.S. Patent and Trademark Office official, practically went to Bonn alone. Thus the question of how the Trump administration and its point man will meaningfully interact with the 75,000-strong State Department remains as little known as ever.

This did not prevent Tillerson from meeting on the sidelines with representatives of Britain, Saudi Arabia, and other Gulf allies on Friday to discuss the war in Yemen.

Back in Brussels, on Thursday Secretary of Defense James “Mad Dog” Mattis disappointed romantics in the Kremlin by saying it was too early to tell if a military alliance might be struck with Russia. Like a hopeful wooer, Russia would have to “prove itself” before the US committed to anything to beyond first base.

To reassure the old guard, Mattis also reiterated that the US’ commitment to article 5 of the NATO alliance, which guarantees each member’s commitment to mutual self-defense, was “rock solid.”

The ever-melting elephant in the room

Outside the gossip and uncertainty surrounding Tillerson’s hour-long meeting with Lavrov and briefer parlays with British Foreign Secretary Boris Johnson and a dozen other leaders, the major issue on the G20’s agenda was climate change—which should come as no surprise given it was Germany’s turn to set the group’s agenda.

Pieties aside, it was also the first time that energy and climate sustainability formally dominated a G20 summit. Hence the day’s most ironic—and historically telling—touch: while the former Exxon executive continued to pooh-pooh man-made environmental harm, China stepped up to ensure the Paris Agreement still had teeth.

No matter what the Americans decide to do, China’s foreign minister Wang Yi bluntly put it, Beijing intended to stand by its commitment to the Paris Agreements. Calling it a milestone in the history of global climate governance, President Xi Jinping hinted the Middle Kingdom might take much more of a leadership role.

In a world in which climate change, trade, and small-scale festering wars have come to dominate the global political landscape, rather than even lose the argument, the Empire by Invitation seems simply to be making an Irish goodbye. And though talk is cheap, between Davos and Bonn, the past two months alone have shown that China is keen on leading the pack in at least two of those discussions: climate and trade.

“Scratch any American,” the American Secretary of State Dean Rusk once famously warned his British counterpart, “and underneath you’ll find an isolationist.” What happens when you scratch the dragon?