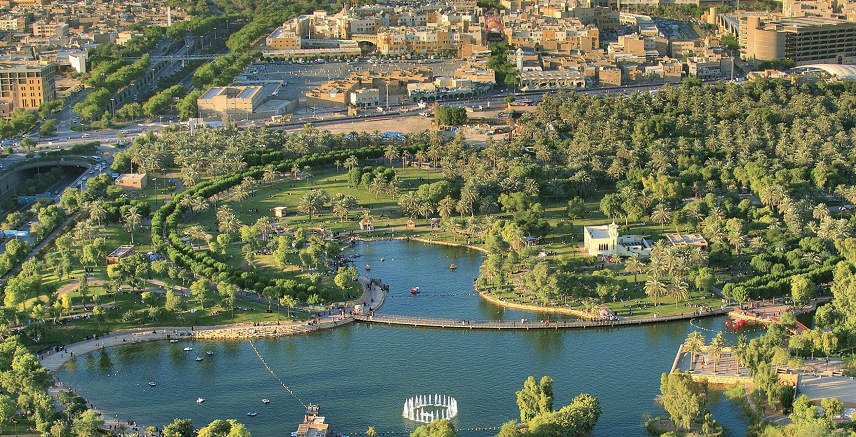 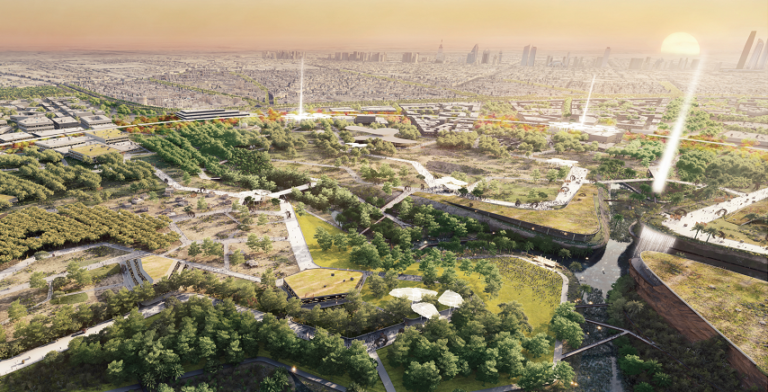 On the invitation of the Royal Commission for Riyadh City (RCRC), formerly known as the Arriyadh Development Authority (ADA), some 60 subject-matter experts and renowned academics in the fields of architecture, urban planning, city management, power and water, and art and culture management traveled to Riyadh to provide their vision and recommendations on four new projects in Riyadh City, as part of the city authorities’ Riyadh Sustainable City Symposium.

Connected through a master plan, King Salman Park, Riyadh Art, Sports Boulevard, and Green Riyadh are the new megaprojects to improve the livability of the city for its residents and move up in the global rankings of most livable cities—one of the core objectives of Vision 2030’s Quality of Life program. Aside from building attractive new parks and facilities, the projects include extensive sustainability efforts to equip them with high energy and water efficiency standards.

The projects come at a time when Riyadh’s urban landscape is already under rapid transformation; the first of its six newly constructed metro lines are set to be operational in 2020, while King Abdullah Financial District (KAFD) is gradually opening its doors and will host the G20 in November that same year.

King Salman Park will break ground at the former military airport, centrally located in the expanding urban city district. The design of the project comes from Saudi architecture firm Omrania and the Danish Henning Larssen and aims to have a green area of 7.1sqkm—roughly two times the size of Central Park in New York—thus immediately jumping up the ranks of the largest man-made parks in the world. With self-resilient plants that grow in desert valleys, wind management solutions (inviting cold southern wind, diverting hot northern wind), and water-cooling systems, the park is meant to become a year-round facility for leisure of the residents of Riyadh and its visitors. Most notable in the design is a circular loop that connects all entry points and where visitors can use bicycles or electric vehicles to go around—or simply opt for walking. The park will also be home to the Royal Arts Complex, where a new 2,500-seat National Theater will be constructed along with open-air auditoriums, cinemas, museums, and art academies.

The second project is the Sports Boulevard, locally dubbed Al Masar, and is geographically shaped along two of the city’s main infrastructural axis. Its key feature is a 135-km cycling path where residents can get around between the different sports facilities, wellness centers, and entertainment outlets, adding another 3.5sqkm of green areas and open spaces to the urban fabric of the city. Notable elements in this design, by the hand of a consortium led by Coen + Partners, is a promenade to get around between the various facilities, a horse path, and a ‘sports tower,’ a multi-story construct with tennis and football courts.

The Riyadh Art project is a public arts program to catalyze the creation and appreciation of visual arts in the city. Through new venues and museums, art festivals like the annual Nour Festival of Lights and an Urban Art Lab, the city authorities cater to the growing awakening of art enthusiasts in the city, inviting both internationally renowned artists to the city while also encouraging the local artist community to display their work.

Lastly, Green Riyadh is citywide initiative to make the capital of the desert Kingdom into a literally green city. The project targets public spaces like parks, mosques, universities, government buildings, medical cities, and even parking areas around the city, redeveloping with minor and major interventions to build more green spaces. With a total of 7.5 million new trees and wider sidewalks, the city government aims to provide more shade and invite residents to make small commutes by walking.

Currently, green spaces in the city of Riyadh amount only to 1.5%, and this masterplan aims for a six-fold increase to 9% or a total of 540sqkm. The total development value of the four projects is USD23 billion, half of which to be committed by city authorities, while the private sector is invited take the other half, primarily through various public private partnership schemes. The projects all have aggressive timelines, starting in the second half of 2019, largely to be delivered in full swing in 2024. Green Riyadh, impacting the city as a whole, is part of the Vision 2030 agenda, and the goal is for it to be completed by then.

During the breakout sessions of the symposium, international experts were invited to provide their input on the development plans based on their specialty. One group focused on the engineering feasibility, taking into account the increasing need for water, power, and waste management, while others looked at public engagement, preserving cultural heritage, and maintaining and upholding the artistic quality of the new urban infrastructure.

The key recommendations include incorporating testing phases in each project timeline to ensure feasibility, and redirecting early public engagement for social sustainability, as well as a focus on local art and culture to maintain the Riyadh character.

The new projects come at a time when Saudi Arabia witnesses rapid economic and social transformation, and the country is welcoming a range of entertainment options like cinemas, concerts and music festivals, boxing matches, and Formula E. The Riyadh Sustainable City Symposium took place during Riyadh Season, a two-month city festival all over the city, involving a complete Winter Wonderland and entertainment areas with popup restaurants, concert venues, and cultural stages in both the old city and in open spaces of the urban area. Since October 2019, international visitors have been able to travel on an e-visa, as part of the Kingdom’s agenda to open up for tourism, thus providing a new catalyst for Riyadh’s ambitious city transformation projects.