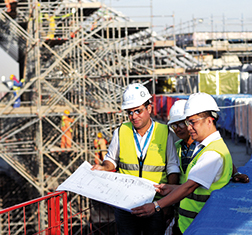 Share on:
The construction sector is the largest employer in Qatar, and with strong state and private backing, it may hold the key to riding out low oil prices.

According to BMI research, Qatar is the fastest growing construction market in the Gulf region, with numbers commonly associated with much larger states. With the FIFA World Cup in 2022 and Qatar National Vision 2030 (QNV2030), massive projects are in the pipeline, including a $7 billion deep-water port, the $1 billion Doha transportation corridor, and new roads and sports facilities that will account for an additional $200 billion. Mobility infrastructure underway also includes a metro system. The 433,000 sqm Doha Festival City and Doha Bay crossing alone are worth $5 billion. According to Qatar Construction News, up to $350 billion of projects are being planned or are under construction. That is more than $1.25 million per citizen. About $70 billion of this could be spent on infrastructure projects related to the hotel industry, leisure activities, tourism, sports facilities, and other recreational options.

Deloitte Middle East’s report ‘GCC Powers of Construction 2015: Construction — The Economic Barometer for the Region,’ maintains a similarly optimistic outlook for the GCC region, despite lower oil prices, market wariness of the region, and a souring IMF outlook. In 2015, contracts awarded across the region still surpassed $194 billion, according to Ventures Onsite.

Qatar commanded a 9.3% share of the total projects awarded in the GCC region, despite accounting for a much smaller share of the overall population. In 2014, real growth registered 18%, the fastest-growing construction market in the region. That same year, Qatar led the region in awards for construction contracts. In line with these figures, the construction industry is expected to grow by 11.4% between 2015 and 2022 according to BMI research. While other sectors struggled to put up the numbers in 2015, Qatar’s construction sector maintained momentum with a slew of new projects announced and extensive opportunities for public participation.

The Ventures Onsite MENA Projects Database supports the widely held assumption that the domestic construction sector is well inoculated against the global oil glut. Oil and Gas accounted for only 8% of construction budget totals as of January 2015. Compared to 50% for buildings, another 33% for infrastructure, and 3% for both marine and power & water respectively, the steadily increasing value of contracts awarded is headed towards a post-oil economy and construction is laying the foundations. In 2012, contractor awards were $18.02 billion. In the subsequent years, this number rose to $26.4 billion, $37.8 billion, and $48.9 billion by 2015.

While the aforementioned numbers are generating respectable profits in the industry, the IMF cautioned Qatar to scale down a number of its megaprojects to avoid overspending and potential for inflation and over borrowing. These concerns are real, and have implications for the trajectories of future projects. The government budget is expected to grow through 2015 and 2016. This is in part to offset the slow pace of projects in preparation for the 2022 FIFA World Cup. While the government and FIFA are both confident about deadlines, there is a sense of urgency.

That said, analysts expect that 15% will be rescheduled in coming years, with a number of cost overruns as well according to Ventures Middle East. The Ministry of Finance is still committed to the current scheduling, and the expansionary pace is likely to last through 2017. Non-hydrocarbon sector investments over the last years in construction, large infrastructure, healthcare, and education are then expected to translate into growth.

The excavation of a 10 km-long, 30m-deep tunnel that makes up Doha’s ambitious drainage project was completed in mid-2015. Around the same time, the government announced plans for a 6.3 million sqm industrial zone. According to a 2015 report by Alpen Capital, $74.6 billion worth of transport projects are at various levels of planning and construction. The pre-qualification list comprising a consortium of 15 companies was implemented for the first phase of Qatar Railways Company’s (QRC) long-distance rail. QRC also announced that it would complete tunneling work for the first phase of the Doha Metro project in 2016. Meanwhile, work on the Lusail tram is nearing completion, with four at-grade stations completed as of late 2015.

Anantara’s Banana Island Resort also opened in 2015, as did the Marsa Malaz Kempinski hotel. Qatar is also extending its roadways with 43 major contracts worth almost $11 billion. Last year also saw the debut of the Hamad International Airport’s expansion plans. This development includes expanding the main terminal and the addition of concourses D and E. The airport will also be connected to the Doha Metro. The first phase of Hamad Port is on course to open in late 2016. Not only will this bolster the country’s trade capacity, it will also streamline the import of materials required by other projects.

The World Cup invariably takes center stage in any discussion of Qatar’s development plans, and this is especially pronounced in construction where a slew of stadiums and related infrastructure are being erected. As recently as late 2015, plans to move forward on the 60,000-seat Al Bayt Stadium were announced. This brings the total to eight stadiums, with five more designs revealed. Healthcare infrastructure is also driving construction, with the opening of Al Ghuwairiya, Al Karaana and other public health centers recently making the press.

The hospitality sector spent 2015 preparing rooms for football fans and the subsequent onslaught of business that will hopefully continue long after the last ball has been kicked. New entries included Anantara’s Banana Island Resort, the Marsa Malaz Kempinski hotel, and Hilton’s second property in Doha, the DoubleTree Doha. Local real estate heavyweight DTZ said that up to 4,000 new hotel rooms will come to the market by YE2016.

Organized retail is currently at around 700,000 sqm across 14 shopping centers in late 2015, according to DTZ. More malls will enter the market in 2016 to accommodate what retailers expect to be a surge in pre- and post-World Cup visitors. By late 2015, Tawar Mall was wrapping up construction. Al Hazm Mall is expected to cut the ribbon in 2016, as will the Mall of Qatar, scheduled to open in September 2016. According to DTZ, a total of 12 are either planned or under construction, and by 2019, retail space will almost double to 1.3 million sqm.

According to the International Construction Costs Report by EC Harris, construction costs are the highest in the Middle East. A similarly themed report by Arcadis in 2012 forecast that Qatar’s construction inflation could reach 18% by 2019. By 2014, Arcadis cautioned that the construction inflation rate could reach 20% during the same period. However, these reports failed to take into account the drop in oil prices. While state spending continues apace, private players could defer or cancel some large-scale projects. This in turn would ease pressure on supply chain bottlenecks, and drive down demand for materials and labor.

Pressure should also ease in the construction of office space. Offices set to come online in West Bay and Lusail will add 300,000 sqm of office space by the end of the year. With major oil and gas companies and government agencies squeezing the breaks, this could generate oversupply, forcing longer-term projects to be put on ice.

So while this is bad news for some developers in oil and gas, Ventures Middle East points out that other projects already underway will benefit from lowered construction inflation. Examples of winners in this scenario include those working against a fixed deadline, such as projects linked to the 2022 FIFA World Cup.

Qatar’s construction industry has been forced to contend with both rapid modernization and the increased scrutiny that hosting a major global event entail. The 2014 Qatar Construction Specification (QCS) mandated that all areas of building and construction revise their policies and practices in 2016 in line with new building standards.

In 2015, methods to monitor the quality of construction were already implemented for the most part through a unified online system that was announced that same year. According to the Qatar Statistics Authority, 36.9% of the national workforce was linked to construction and, at the close of 2015, Ventures Onsite found no evidence that this share had changed substantially.

Finding green solutions to the national housing and infrastructure deficit is another important top-down directive being instituted through the Qatar National Development Strategy 2011—2016. This directive is manifest in the Qatar Sustainability Assessment System for Green Buildings.

Qatar’s construction faces a growing list of challenges in 2016. However, this list, which includes a shortage of labor, increasing construction inflation, and falling oil prices, appears unable to stymie the construction sector’s growth trend ahead of the 2022 FIFA World Cup and the years ahead.