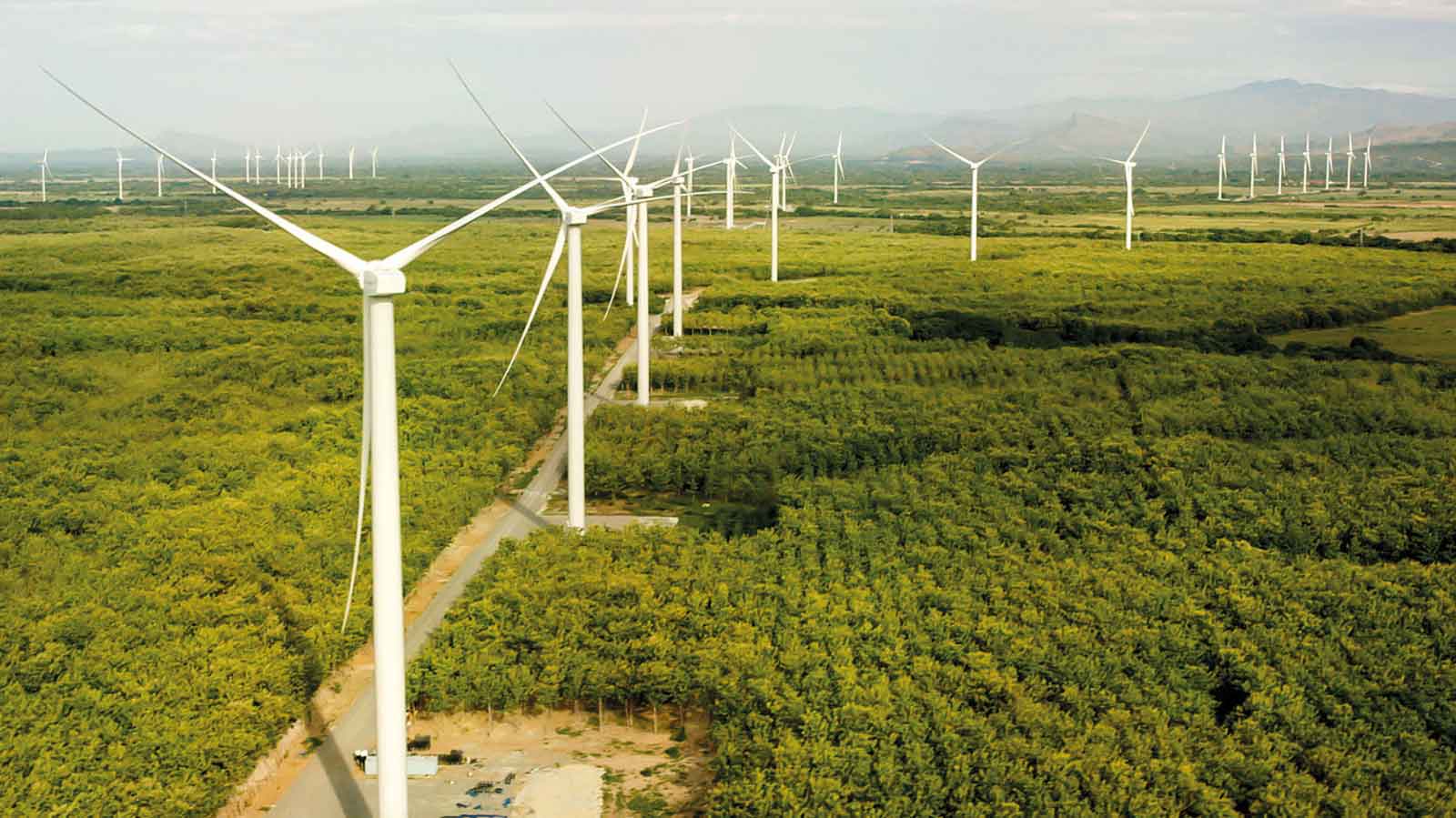 As a connector between two major continents, Panama is home to both economic and ecological diversity. A variety of plant and animals species native to South and North America are present in Panama, as well as a number of species found nowhere else on Earth—making it one of the most biodiverse countries in the world. In total, there are 1,569 known species of amphibians, birds, mammals, and reptiles living in Panama, of which 5.5% are endemic, as well as 9,915 species of vascular plants, of which 12.3% are endemic. The largest rainforest in the Western Hemisphere outside of the Amazon Basin can also be found in Panama, and 500 rivers flow through the country, many of which are a source of hydroelectric energy.

To protect its precious natural resources, the government encourages, recognizes, and rewards green initiatives in several sectors, including real estate and construction, logistics and transportation, and energy. Moreover, numerous conservation agencies, both indigenous and international, operate in Panama to preserve its wildlife and spearhead sustainable development. As a result of these efforts combined, deforestation has been reduced by 18% since the 1990s.

With the country’s high levels of solar radiation, extensive hydraulic capacity, and exceptional wind conditions in the central region, Panama boasts prime conditions to develop renewable and sustainable energy. This shift could propel Panama into a position as a regional leader by complementing the Central American energy matrix, thus helping to balance prices in Nicaragua and Guatemala.

Currently, about 65% of Panama’s annual energy supply is produced from renewable sources, with hydroelectric and wind power comprising the largest portion. About 35% is sourced from thermal and carbon-based sources. Public-sector investment in renewables is high, with tax benefits and clear regulation in place to inspire private investment into the mix. However, interest from the private sector has been lackluster at best, with private sector renewable energy operators such as Solarcentury identifying a need to attract more FDI to the sector. “It is crucial that more international investors come to the country to boost the efforts and initiatives to invest in renewable energy in Panama,” Enrique de Ramon, Managing Director of Latin American for Solarcentury, told TBY. Until then, the energy supply mix is on an evolving trajectory, maintaining traditional thermal resources alongside more sustainable initiatives.

A new coal-fired plant and three new gas-fired plants are on the way over the next five years. “Panama currently has a maximum demand of approximately 1,700MW and the gas projects are large, averaging around 500MW each, so if we have two or three of those projects, it significantly changes the profile of the sector with the majority of current oil-fired capacity becoming obsolete,” Patrick Kelly, Chairman and CEO of Panama Power Holdings, explained. Panama Power Holdings is a hydroelectric energy supplier with four ongoing projects, striving to help shift the energy matrix to sustainable sources, with an initial offering of 120MW and USD250,000 of investment in corporate social responsibility programs. While gas-fired plants are less harmful to the environment than fossil fuels, their incorporation into the energy mix signifies that Panama will not aim for a 100%-renewable energy production target.

The first step for many energy producers will be to convert from coal fired to gas fired. For CELSIA’s complexes at Chiriquí­ and Bahia de las Minas, the process of transformation will begin with contracts that expire in 2018, marking the start of new long-term bidding. “That process of transformation includes the conversion toward gas,” Javier Gutierrez, General Director of CELSIA, explained to TBY. The company already operates hydroelectric generation centers and a solar plant of 40-60MW in Chiriquí­.

Although only comprising 1% of the current energy matrix, solar is emerging as a low-cost generation alternative for Panama. The government has supported solar through legislation issued in 2013, which includes fiscal incentives and special tenders for solar projects exclusively. “We have a nascent solar industry here; it is young, but has tremendous potential and a great deal of diversity. In 2016, we founded the Chamber of Panamanian Solar Energy, which brings together the different companies in the sector,” Juan Carlos Navarro, CEO of NSOLAR, told TBY. The chamber aims to become an active promoter of solar energy, seizing the opportunity to capitalize on renewable generation in Panama, a country that lacks proven carbon resources.
Many solar companies that have chosen to invest in Panama have done so for two main reasons: the stability of the political system and the reliability of a dollarized economy. For Solarcentury, an influential regional operator, Panama also makes an exceptional base for exporting solar technology. “It is extremely attractive for international investment. Also, it is in a great location in terms of logistics in the region. This is a great place to be based for regional logistics, with great infrastructure and connections,” Managing Director Enrique de Ramon emphasized.

Faro Energy and InnoVent are two private-sector companies that offer solar energy solutions for clients seeking self-sustainable options, or “self-consumption.” This option gives clients the opportunity to reduce the impact of energy cost in their operations. Faro Energy owns and operates renewable energy plants that provide less expensive energy directly to the end customer, through contracts that typically stipulate the construction of a facility on site. “Our value proposition is that businesses can become more profitable by gaining access to lower energy costs from day one. Also, customers hedge against rising energy prices, while investing more predictable profits to expand their business and creating jobs,” Jorge Vialette, Director for Central America and the Caribbean of Faro Energy, told TBY.

In April 2017, Italian power provider Enel connected the 42MW Sol Real project to Panama’s grid. The plant is expected to sell power to Enel’s 300MW Fortuna hydroelectric power station, generating around 70 million GWh of electricity per year. The USD55 million project consists of five subunits: the 5MW Caldera Solar and the 8MW Sol de David, the 11MW Sol Real, the 10MW Milton Solar, and the 8MW Vista Alegre. Now Panama’s largest photovoltaic plant, the project is the second of its kind in Panama—the company previously installed the 12MW Fortuna plant in Chiriquí­, which came online in 2015. Both projects were developed by the company’s local branch, Enel Green Power Panamá.

The Panama Canal Authority (ACP) announced the launch of the Green Connection Award in 2016, an initiative that “recognizes customers who demonstrate excellent environmental stewardship and encourage others to implement technology and standards that reduce greenhouse gas emissions.”

The environmental standards are set by the International Maritime Organization (IMO) as well as other globally recognized institutions, with candidates evaluated based on specific environmental factors, such as the Energy Efficiency Design Index (EEDI), the Environmental Ship Index (ESI), the amount of nitrous oxides they emit due to engine performance, whether or not the vessel is powered by LNG, and the amount of carbon dioxide emissions reduced by using the Panama Canal compared to alternate routes.

The ACP’s decision to establish the Green Connection Award falls in line with an ongoing commitment to sustainability. With the widening of the canal in recent years, Panama now offers unmatched advantages in terms of mitigating the environmental impact of shipping operations. In total, the canal has directly contributed to the reduction of 650 million tons of carbon dioxide emissions over the past century. Now, thanks to the shorter traveling distance and larger cargo carrying capacity that the expansion offers, a further 160 million tons of carbon dioxide emissions are slated to be prevented over the coming decade.

The ACP is dedicated to the management and operation of the canal, including the preservation of its natural watershed resources. Along with the adoption of international standards and the incorporation of innovative environmental initiatives, the ACP is guaranteeing safe drinking water resources for the 2 million Panamanians it serves. As part of the route’s expansions, the canal now features 18 state-of-the-art water-savings basins that recycle 60% of water used at the locks, registering savings of over 7% compared to the canal’s previous incarnation.

Panamanian builders are also seeking ways to contribute toward making Panama’s economy more green. From international certification to local innovation, the country is a pioneer in terms of environmentally friendly construction in the region.

LEED certification has been available in Panama since 2006, with 25 projects achieving the recognition as of late 2016. Among these are the Panamanian Association of Company Executives (Apede), Bladex offices, shopping malls in Ciudad del Saber and Soho Mall, MMG Bank and MMG Tower constructions, Oceania 23C, Banco General de Versalles, and the National Secretariat of Science, Technology and Innovation. Taking into consideration all of the green building initiatives currently underway, the number of LEED certifications is likely to reach 68 over the medium term, allowing Panama to claim second place after Costa Rica in terms of number of LEED-certified buildings in the region.

Innovators have also used Panama as a testing ground for ways to repurpose plastic bottles as residential building insulation material. Approximately 120 homes are to be insulated by thousands of plastic bottles recovered from the waste stream. Known as the Plastic Bottle Village, the goal or the community is to create an education center that will educate others on how to reuse plastic bottles as construction materials. New homes in the eco-village are priced between USD149,000 and USD300,000, with each using over 10,000 polyethylene terephthalate bottles inside the walls. According to the company, the use of plastic bottles is both time and cost-effective compared to typical local materials and techniques, with bottle-based homes boasting the dual benefit of not only being naturally air conditioned, but also being earthquake resistant.