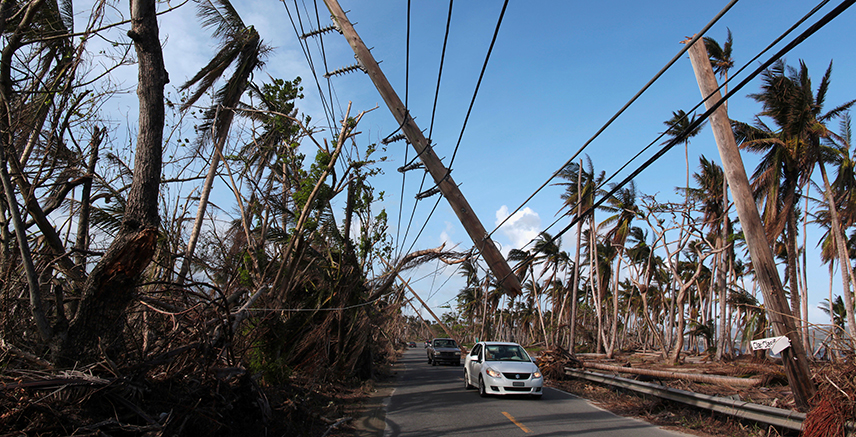 Share on:
Investors have been flocking to Puerto Rico in the wake of Hurricane Maria.

Cars drive under a partially collapsed utility pole, after the island was hit by Hurricane Maria in September, in Naguabo, Puerto Rico October 20, 2017. REUTERS/Alvin Baez/File Photo

Puerto Rico is still recovering from the devastation unleashed by Hurricane Maria on the September 20, when the Category 5 storm crossed the island ravaging much of its infrastructure and electrical grid.

As of early November, only 30.5% of the Puerto Rico Electric Power Authority’s (PREPA) subscribers had service, since most of the grid’s transmission and distribution lines as well as some of the power generation plants were down.

Maria has evidenced the poor state of the territory’s infrastructure, which was not prepared to endure such a storm in the US territory.

But this devastation should have not been a surprise for PREPA’s directors.

The company Synapse Energy audited the utility’s infrastructure a year ago and found that its “transmission and distribution systems are falling apart quite literally,” read the report published in November 2016.

Now the feebleness of Puerto Rico’s electrical infrastructure has been exposed, leaving scores of its citizens without power for over a month.

In response, the government of Puerto Rico is not only working to restore power as soon as possible, but also plans to create a new hurricane-resilient grid, offering a good opportunity to rebuild the system from scratch.

The island’s governor, Ricardo Rosselló, announced that his administration aims to introduce a major program of concessions for public-private partnerships.

In an interview with the local newspaper El Vocero, Rosselló was cited as saying that the collaboration with the private sector will be “more important than ever before,” and extended this offer to rebuild not only the power system but also to improve the island’s telecommunications infrastructure.

To reach this goal, the governor has noted that his solar technology deal with Tesla, the innovative auto industry firm, will be paramount.

Tesla’s CEO Elon Musk has donated USD250,000 himself to support relief efforts, while the company has already installed a solar and power storage project which returned electricity supply to a children’s hospital.

For this project, the company used its Powerwall batteries, which can store up to 13.5 kilowatt-hours each of energy produced by solar panels. Tesla has already sent hundreds of these to Puerto Rico, setting an example for how power generation could be managed on the island in the near future.

Governor Rosselló has not only partnered with Tesla, but also announced that his team is analyzing alternatives to reestablish energy by using small power networks that can work separately of PREPA’s main grid.

Should Rosselló handle this situation skillfully, he could be remembered for building a state-of-the-art energy grid from the ashes of the old one.

As for the island’s immense debt, US President Donald Trump has pledged to wipe it out after visiting to oversee the reconstruction efforts, causing Puerto Rican bonds to plunge immediately.

It is possible that this huge debt could be reduced, with estimates for the reconstruction cost lowering to USD73 billion from the USD90 billion that Moody’s had forecasted.

This will free up Puerto Rico’s government to diverting a large chunk of its budget to meet its obligations, investing instead in rebuilding the outdated system.

Either way, the island is set to receive a large influx of federal aid and so far the Federal Emergency Management Agency has sent around USD1 billion to finance the restoration of the electrical grid.

The utility alone is responsible for USD9 billion of the territory’s USD73 billion of debt.

Prior to Maria, the Puerto Rican government had aimed to get at least 20% of its electricity from renewables by 2035, but the wholesale reconstruction of the entire infrastructure in the wake of the disaster will allow for multiple opportunities to create a more ecofriendly energy system.