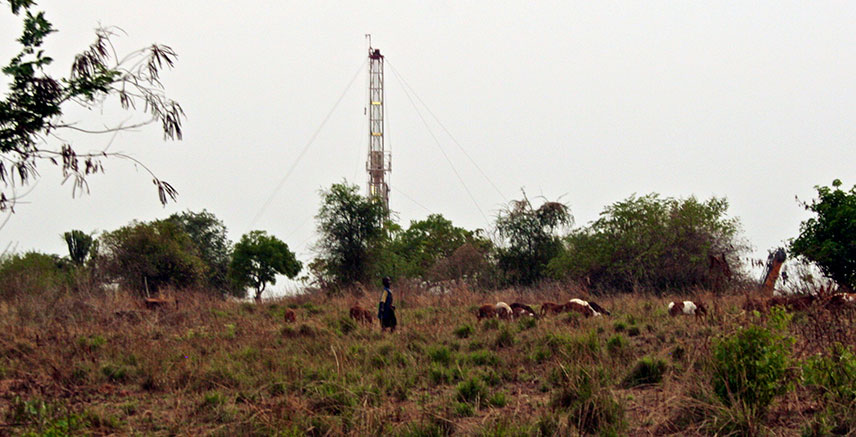 A boy herds goats in front of a Tullow Oil drilling rig in Bulisa, in the Bunyora region of Uganda February 15, 2010.

While the agreement does not formally outline the details of the project, it represents a decisive advancement of the estimated USD4-billion project. With reserves of roughly 6.5 billion BOE found in 2006, Uganda aims to become a major oil producer and use the proceedings to promote the country’s economic development.

However, these ambitions have met obstacles at every turn. After the discoveries, President Museveni declared a moratorium on oil and gas development to give state institutions a chance to gather the necessary know-how to deal with oil and gas companies.

With international backing, the government sought to train and better equip the people who would represent the state in these negotiations, a vital and effective strategy.

Uganda is known to have held some of the toughest negotiations in the continent with the country’s three oil reserve holders: China National Offshore Oil Corporation (CNOOC), French major Total, and UK-based Tullow Oil.

With the contracts established, the logistical hurdles remain. As a landlocked country with a small internal market, Uganda categorically needs a way to export its oil reserves to consumer markets, and for that, it needs access to the sea. A plan for a pipeline was drafted in cooperation with the oil companies, with three routes considered.

One was to Lamu, in northern Kenya, where President Kenyatta sought to develop the country’s northern industrial development corridor and connect the Ugandan pipeline to Kenya’s oil reserves in its remote western regions.

While the Lamu route was initially preferred, the intervention of Total in the discussions shifted the decision in favor of the Tanzanian route. Difficulties in land acquisition and legal uncertainty were named as reasons for Total’s insistence, but the company made it clear that it was the deteriorating security situation in northern Kenya, close to the border with Somalia, that ultimately forced the company’s hand. Kenya has a particularly porous border to the north, and Al-Shabab militants are known to operate on both sides of it.

As a result, Kenya lost the pipeline race. Reportedly, land acquisition has been taken care of and both governments desire to push ahead with he project as soon as possible. Construction was initially announced for commencement in August 2016, and then in early 2017. For now, there is no confirmation of a new starting date, even as this agreement seems to be drawing it nearer. It is very unlikely that Uganda will reach its make its deadline for first oil by 2020. And without a pipeline operating, the oil stays underground.

The 200,000 bopd pipeline will take three and a half years to build, at least. As the oil in Uganda is particularly viscous, solid below 40 degrees Celsius, the pipeline will have to be heated and fitted with regular pumping stations to push the oil through the pipeline.

When finished, it will be the longest heated pipeline in the world.

The project is of paramount importance, as it will make East African oil exports possible for the first time in history, all the while attracting billions in investment and creating thousands of jobs. And crucially, it will have the consequence of enhancing regional integration as Uganda’s and Tanzania’s economic futures become inextricably linked.