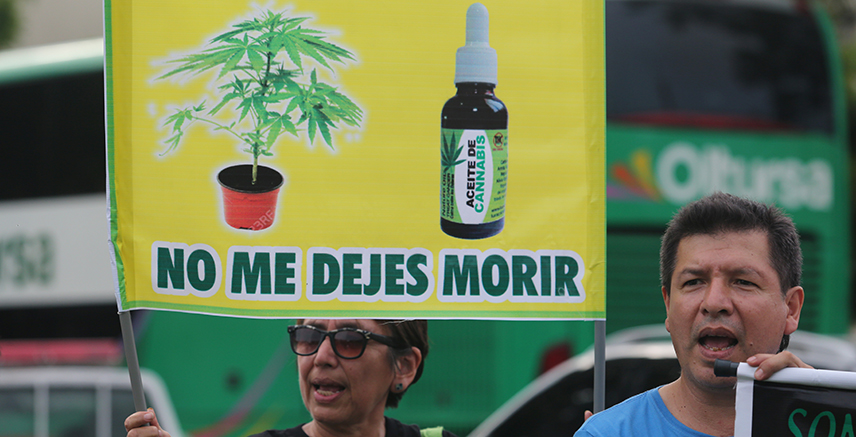 People participate in a protest in favor of the legalization of medical marijuana outside the Interior Ministry in Lima, Peru March 1, 2017.

South America is becoming the most liberal region in the world for smokers of marijuana. After the landmark legalization law passed in Uruguay in 2013, which kick-started a paradigm shift around the world, the time has come for Peru to legalize medicinal cannabis use.

In recent weeks, the Peruvian congress overwhelmingly voted to legalized the production, importation, and sale of cannabis oil with a 68 to 5 vote in favor.

In about two months, as soon as the regulations for production and sales of cannabis are fully defined, the decision will be put into law.

This move by the government has a particularly humane story behind it. Back in February, police officers raided a cannabis oil laboratory. The twist in the plot is that the lab was not run by drug dealers but by a group of mothers that were producing the oil to help their sick children.

Based out of the home of a woman named Ana Alvarez, the oil was produced to help as many as 300 patients, including Ana’s son, a 17-year old boy that suffers with tuberous sclerosis.

Ana’s tale reverberated throughout the Peruvian society and started a healthcare, rather than a criminal, debate, over the case for decriminalizing medicinal marijuana. Eight months later the decision is now taken to allow for the serious and terminally ill to be treated with cannabis oil in Peru, and for permit holders to produce it without fearing prosecution.

This landmark development in the country is yet another stepping-stone to region-wide legalization of marijuana.

It seems that all it takes is a spark. The breakthrough in 2013 that saw Uruguay become the first country in the world to fully legalize the production, consumption, and sale of cannabis, would perhaps not have taken place if it wasn’t for the arrest of a woman, Alicia Castilla, in 2011. Alicia, a 66-year old author, was arrested at her home while she watered her 26 cannabis plants, which she kept for personal use.

She had made a career writing books about cannabis. Uruguay never criminalized consumption, but production and sale were outlawed.

Alicia faced up to ten years in prison. Society reacted with an uproar, as the situation clashed with the open-mindedness that Uruguayans had become used to identify with. One thing led to another and three months later Alicia was freed and legislation was passed to assure she would not be disturbed again.

While Uruguay remains the most liberal of South American countries, others have followed similar paths.

Colombia legalized the cultivation of marijuana for medical purposes in 2015, and since then has used the crop to fight the widespread cultivation of coca leaves, by promoting farmers to replace it with marijuana.

The end of the conflict with the FARC has since opened the door to considerable growth in the sector as previously occupied areas are being turned into marijuana farms.

Chile followed the trend that same year. At first, patients could only import the product from a selected number of farms controlled by a charity, but since May 2017, pharmacies have started distributing cannabis on a prescription basis as well.

In Brazil, after years of legal debate, the health authorities have licensed the sale of a marijuana-based pharmaceutical drug for the first time in January 2017.

It is still a step away from legalization, but it seems to strongly tend in that direction.

In Paraguay, Venezuela, and Ecuador, the use of cannabis has not been legalized but the possession and consumption of small quantities has been depenalized, and law enforcement does not really pursue offenders all that strongly.

The one major exception is Bolivia, where cannabis is still outlawed. However, producing coca leaf, the basis of cocaine, isn’t, as chewing coca leaves has been an enshrined part of the local culture for centuries.

As more countries loosen their grip on the use of cannabis, particularly within the context of a failing and expensive war on drugs, South America seems to be becoming the most marijuana-friendly region in the world.

It is worth wondering if the experience can be extended to other types of drugs, like happened in Portugal in 2001, when the country depenalized the consumption of all narcotics, treating consumption as a health issue rather than a crime. Deaths by overdose fell to a seventh of what they were in the first 10 years.