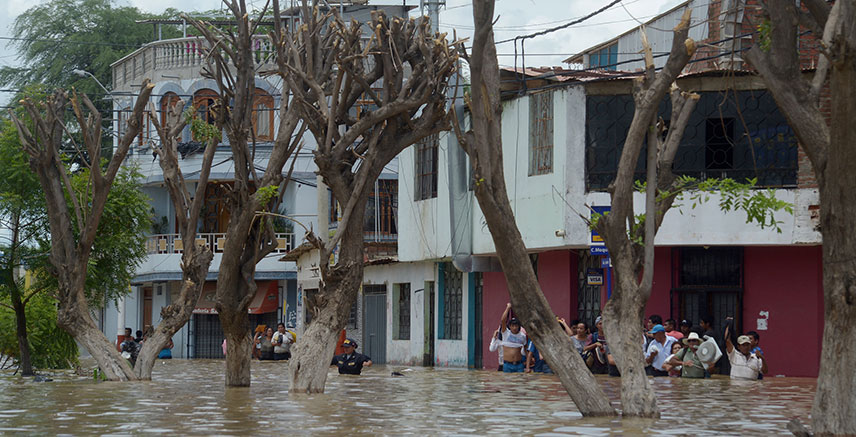 When the Levee Breaks

Share on:
Peru is no stranger to the disruptive El Niño phenomenon, but this year’s rainy season has left a staggering amount of destruction in its wake.

The last few months have seen rainfall more than ten times higher than normal levels causing devastating floods across much of the country. Reports as of March 28 stated that 94 people have died and more than 700,000 have been left homeless as a result of the flooding. The economic consequences have also been massive; early estimates suggest that the deluge has cost Peru’s economy more than USD3 billion and that repairs and rebuilding of infrastructure will take years to complete. It’s a frustrating step backwards for a country that hoped to launch a series of ambitious infrastructure projects in 2017.

Put simply, El Niño is a climate pattern that leads to the warming of the Pacific Ocean’s eastern waters. Climatologists have found that it results from changes in the air pressure that pushes warm water toward Asia. As these currents weaken and shift accordingly, streams of warm water move toward Peru’s northern coast. This occurs irregularly at intervals between two and seven years, and was first recognized by Peruvian fishermen who noticed that the waters would become unseasonably warm around Christmas.

Warm water might not sound particularly troubling, but it’s hard to overstate how harmful a strong El Niño can be for Peru’s economy. The country’s fishing industry, long one of its central economic drivers, is built around the cold-water anchovy which is used to make fishmeal. Peru is the world’s largest producer of fishmeal, producing around 15% of global supply. The warming effect of El Niño, however, has in the past driven anchovies away from their traditional breeding grounds, dramatically slashing Peruvian output.

In order to deal with this shifting supply, the Peruvian government institutes quotas for each fishing season to prevent overfishing. This most recent El Niño led Peru’s government to revise its forecast for the anchovy catch from 4.6 million tons to 3.2 million; while still an increase from the 2.7 million tons caught during the previous season, it’s an indication of the strength of this year’s climate cycle. Recently, the industry has increased its presence in coastal waters and introduced new deep-water trawling procedures to boost its catch numbers in unfavorable weather conditions.

But while the fishing industry can use new technologies to increase efficiency and prevent overfishing, there’s no such easy solution for the rains and flooding that come with a strong El Niño. The warmer waters bring increased precipitation to the northern coast of Peru, generating the flooding that is currently overwhelming coastal regions. This isn’t the first time it’s happened; the 1997-1998 El Niño brought over 80 inches of rain in six months and led to flooding and mudslides that killed more than 200 people.

This time around, prompt emergency action has kept the death toll lower, but property and infrastructure damage has reached new heights. An estimated 150,000 houses and businesses have been flooded, with most of the damage concentrated in the northern coastal areas of the country. Piura, the center of Peru’s fishing industry, has lost more than 15,000 acres of crops. Roads and bridges have been washed out, potable water is in short supply, and levees have been overwhelmed by the rain that has come since January. The flooding has also exposed weak points in the country’s infrastructure, with poor communities living in ill-constructed residences the hardest hit by the floods. Making matters worse, officials have said that they expect the El Niño rains to continue for an additional month.

This would be difficult in the best of times, but the timing of these floods could hardly be worse for new President Pedro Pablo Kuczynski. PPK, as he is widely known, ran on a platform of boosting the nation’s infrastructure through a series of ambitious private funding projects, a goal that had already taken a hit after fallout from the Odebrecht corruption scandal threw the future of the Southern Gas Pipeline into question.

Officials had hopes of instituting a number of large-scale transportation and telecommunications projects that would have dramatically increased economic access in rural regions of the country, but now billions will need to be spent on repairs to what were previously considered the more developed coastal regions.

It’ll be an immense task, but Peru has already begun the recovery work needed to move forward. International aid from the US, China, and Colombia, among others, will help with relocation and disease prevention, while the nation still retains a reputation as a politically stable and well-developed state open to foreign investment. For the time being, Peru is focusing on rebuilding its northern coast to avoid further ruin.