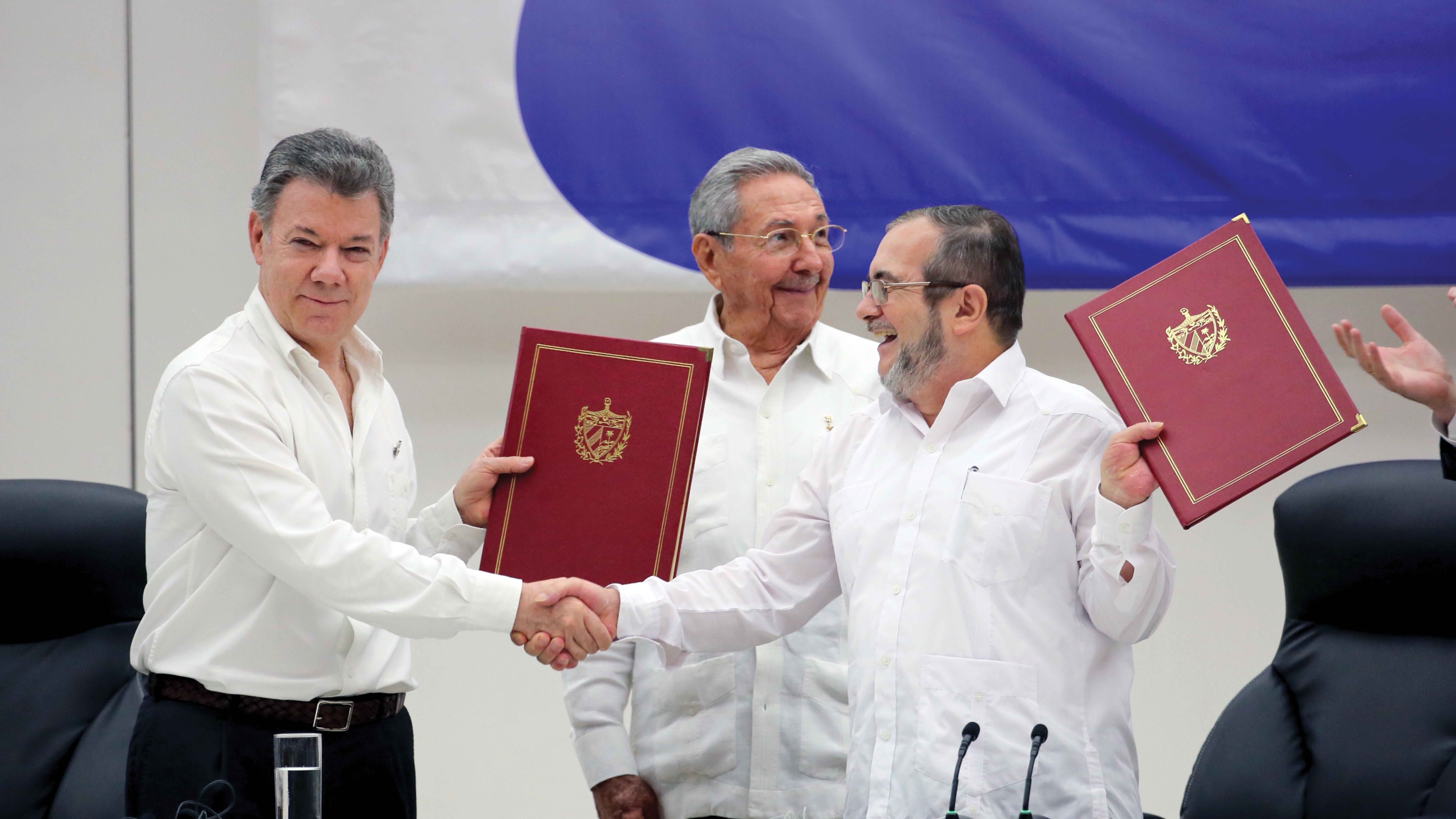 Peace in our Time?

Share on:
The US has long supported Colombia in the war on drugs, but a new phase of its relationship is about to come forward, one of peace and not war through the initiative Paz Colombia.

Colombia has undergone a huge transformation in the last few decades. Its international reputation has grown more positive as crime rates have dropped, and tourists have begun to flock to the country. Areas that were once “no-go” zones for foreigners have now become havens for backpackers and business tourists alike. This turnaround is due to a number of factors, including a more open economy that has allowed a series of FTAs and economic treaties to be signed. In 2016, a major breakthrough was made in the peace process with the Revolutionary Armed Forces of Colombia, or FARC as it is more commonly known. An end to the war appears to be in sight after lengthy talks in Cuba. The US has long supported the government of Colombia in its war against the rebels and drug cartels and, through Paz Colombia, the country has sought the demobilization of rebel forces, which are believed to be behind much of the country’s drug trade. Along with the fall in violence, Colombia has opened much of its economy to foreign investors and companies. The country has signed FTAs with many of the world’s largest economies and is a founding member of the Pacific Alliance. It is also a member of numerous economic organizations, both regional and global.

On June 23, 2016, President Juan Manuel Santos and the leader of FARC, Rodrigo Londoño Echeverri, signed a historic cease-fire that laid the groundwork for a full peace treaty. After 52 years of fighting and four years of negotiations, the two managed to come to an agreement. In reality, the two forces had actually stopped fighting over a year before, when FARC declared a unilateral cease-fire and the government called a halt on all offensive operations against the group. However, the cease-fire has now been enshrined in a formal declaration by both sides. What must be done now is plan out how to demobilize FARC’s 6,800 troops and 8,500 militia at 23 fixed positions and integrate those people back into society. The war against FARC was long and took a heavy toll on the people of Colombia, and the wounds from this conflict are still fresh. For some, the integration of FARC’s soldiers back into society is a step too far. The government is planning a referendum on the peace deal to allow the public to decide the way forward. Polls carried out in August painted an uncertain picture, with many believing the deal is too lenient on FARC rebels. Álvaro Uribe and Andrés Pastrana, two former presidents of Colombia, are behind the “No” campaign for the upcoming vote. They believe a public rejection of the deal would force everyone back to the negotiating table to go over some of the more controversial points regarding transitional justice and the political participation of FARC. The “No” campaign believes FARC is responsible for numerous war crimes and the current deal would let it off lightly. However, the chief government negotiator during the process, Humberto de la Calle, believes a no vote would be a huge mistake. He points out that voting no does not guarantee a return to the negotiating table and there would be little to win for Colombian society by rejecting the deal. The entire Santos administration is behind the “Yes” campaign and knows that to solidify the vote, it must ensure that the public believes that the rebels will not be let off for their crimes. Talks are still under way in Havana to negotiate the final peace process deal. In the meantime, government officials, FARC, and UN Security Council officials are carrying out technical visits to the 23 fixed positions. Within a week of the deal being signed, all weapons will be laid down at these camps and, within 180 days, the group will be fully demobilized. Few want to go back to the period of the 1980s and 1990s during the height of the violence when bombings and kidnappings were the norm; however, the public also wants justice.

The US has long been a friend of Colombia, and for many years has backed the Colombian government’s efforts to fight drugs and rebel groups. Part of this relationship has been Paz Colombia, or Peace Colombia. In February 2016, President Santos and President Obama celebrated the 15th anniversary of the initiative by allocating a further $450 million for the peace efforts. Paz Colombia is the next step of Plan Colombia, which in light of the recent developments in the peace negotiation changed its name and strategy. Paz Colombia will focus on fulfilling the peace agreement and maintaining talks between the two groups.

As prosperity rises in Colombia, its neighbor is unfortunately experiencing quite the opposite. While Venezuela and Colombia do not have the coziest of relationships, in recent times things have thawed somewhat. Still, the situation in Venezuela, especially since the death of Hugo Chávez, has taken a turn for the worse, confounded by low oil prices. This has led to hyper-inflation and a lack of even the most basic of goods, causing Venezuelans on border towns to cross into Colombia to purchase goods. In mid-2015, President Nicolás Maduro of Venezuela closed the border with Colombia, citing security concerns after three soldiers were killed in an attack allegedly by right-wing Colombian rebels. The border between the two nations has long been a trafficking route for organized crime, which was possibly the reason behind the attack. With the economic situation in Venezuela deteriorating, in August 2016 the two presidents came to an agreement to open five pedestrian border crossings for 15 hours a day. On the first day by 4pm, over 40,000 people crossed the border to the small border town of Cúcuta to buy food, medicine, and household goods, things that had become difficult to find in Venezuela. The opening should provide some relief to the Venezuelans close to the border until the situation improves.