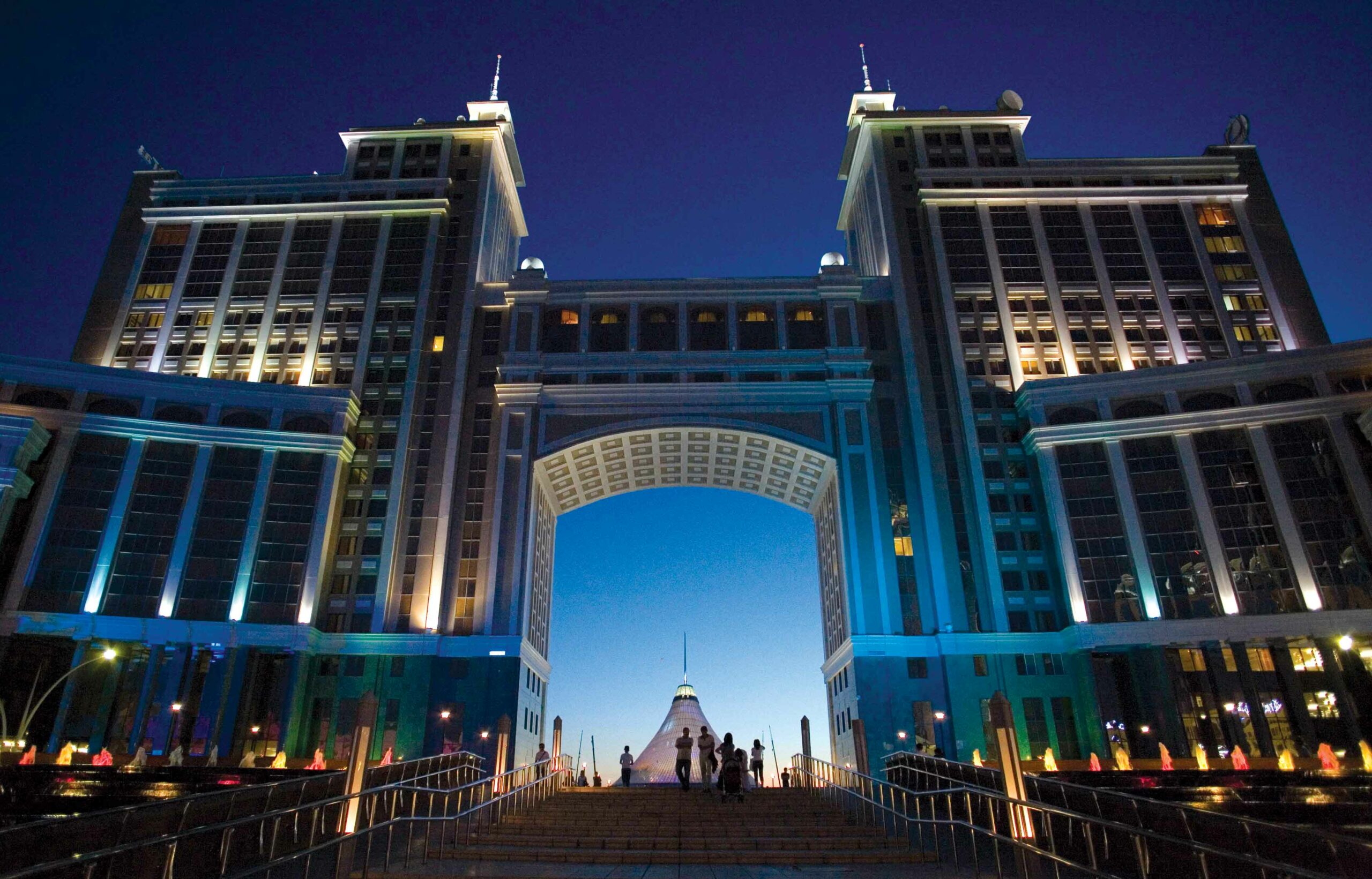 Share on:
Kazakhstan is undergoing a major economic overhaul that stands to base the economy on diversified and stable growth.

On May 24, 2016, IMF Managing Director Christine Lagarde, on her first visit to Astana, congratulated Kazakhstan on the silver jubilee of its independence, secured back in 1991. The nation has taken major strides in subsequent years to replace the command model with a vibrant free market economy. And having kicked off this transition with its new capital city of Astana, and its own currency, the tenge, the nation has embarked upon a massive and ambitious economic journey, one that has seen the establishment of today’s dynamic capital markets, fronted by government strategy to diversify the economy beyond hydrocarbons and galvanize private sector endeavor.

The central bank, the National Bank of Kazakhstan (NBK), has proven willing and capable of grasping the bull by the horns to mitigate currency related headwinds, notably the devaluation hurricane that made landfall in August 2015, when the tenge was un-pegged from the dollar, costing it 24% overnight. Just the previous February, the tenge had shed 14%, whence began a period of muted economic growth, burdened further by global conditions and sentiment toward EMs. The economy grew 1.2% in 2015, a notable decline from the 4.1% of 2014. And despite prudent fiscal management and public spending on infrastructure, GDP growth decelerated further to 0.7% in 2016. However, 2017 seems set for a trajectory reversal now that oil prices seem to have recovered from their terrible troughs. Oil output at new assets will also head north, and meanwhile the national strategy will make FDI a more appealing proposition, with major state conglomerates shortly to be brought to market. Currently, market consensus for 2017 points to GDP growth of 2.1%, rising to 2.8% in 2018.

Kazakhstan’s economic strategy is enshrined in its respective economic plans to 2020, 2030, and 2050. The 2050 Strategy, launched by President Nazarbayev in 2012, is the blueprint for 21st century Kazakhstan, one based on diversified and stable growth, the fostering of SME activity, and rebranding of the agricultural sector as a global go-to place for organic produce. Land reform is a priority for the latter, as the bulk of land remains state owned and inefficiently parceled. The strategy also seeks to develop the nation into a viable hub for the tapping of regional markets. Of note, and capitalizing on the qualified return of Tehran to the global economy, in 1Q2016 Kazakhstan and Iran signed 66 agreements representing bilateral investments of USD2 billion. And meanwhile, education will effect a transition into a data economy where entrepreneurial spirit is fostered among a well-educated workforce.

In November 2014 the president announced the nation’s New Economic Policy, Nurly Zhol. It is based upon seven core areas of development to build the economy of tomorrow. Briefly, the first concerns the development of transport and logistics infrastructure on land, on water, and in the air, to support regional hub-like macro regions. The key black-top routes are the China-Western Europe, Astana-Almaty, Astana-Ust-Kamenogorsk, Astana-Aktobe-Atyrau-Aktau, Almaty-Ust-Kamenogorsk, Karaganda-Jezkazgan-Kyzylorda, and Atyrau-Astrakhan highways. The second commitment involves industrial infrastructure, notably in Kazakhstan’s special economic zones. Included within this is tourism infrastructure where, as the president revealed, the creation of one job costs 10 times less than one in industry. Third comes energy infrastructure development to support nationwide industrialization. Key here are high voltage lines in Ekibastuz-Semey-Ust-Kamenogorsk and Semey-Aktogay-Taldykorgan-Almaty, which will iron out regional energy discrepancies. The fourth and fifth areas involve the modernization of housing and utilities. Accordingly, 1.4 million sqm of rental housing is forecast to be built in 2015-2019. Social housing for long-term rent will also be available for purchase at favorable interest rates to foster home ownership. Water supply output, of note, declined for the fifth consecutive month in January 2017. Meanwhile, up to a further KZT100 billion is to be allocated annually to the modernization of heat and water supply systems. Sixth comes the development of social infrastructure, significantly the educational system.

The seventh and final area of Nurly Zhol involves supporting strategically selected SMEs. These businesses are expected to generate 50% of GDP by 2050, and Kanysh Tuleushin, the former chairman of the DAMU Entrepreneurship Development Fund, explained how, “The main pillar of the the Development Strategy for 2023 is to provide financial and non-financial instruments.” For startups, “there is a guarantee of up to 80% of loans [while for existing businesses] 50% loans are covered by our guarantee.” He confirmed, too, regional specialization, whereby, “In Almaty, [support is provided for] tourism, innovation, trade, and food processing, whereas in southern Kazakhstan it is manufacturing.” Agriculture is earmarked as a core future economic driver, and in this the Aktobe region looms large. Much is still required to maximize the efficiency of these enterprises as while Almaty, for one, has 190,000 SMEs, “only 90,000 are real SMEs, excluding state companies and individual entrepreneurs, [while] approximately 90,000 pay taxes to the budget of Almaty,” and only 25,000 are active in priority sectors.

The implementation of Nurly Zhol overall could create over 200,000 new jobs in total. Notably, unemployment has hovered at around a manageable 5% in recent years, and indeed, according to World Economic Forum, labor market efficiency in 2015 ranked 18th out of 140 countries, up 30 places on its 2014 position.

As has been the case the world over at such economic junctures, privatization is essential to realizing Strategy 2050’s ultimate aim of elevating Kazakhstan to the world’s top-30 economies by that year. State assets account for a massive 40% of GDP, whereby privatization cannot but rely on equally gigantic FDI flows. These, in turn, require legislation conducive to commercial competitiveness. The scheme envisages the sell-off between 2016 and 2020 of 65 of the largest Kazakhstani enterprises from the oil and gas, transportation, and nuclear sectors. FDI rose USD5 billion in 3Q2016, having averaged at USD4.1 billion from 2001 to 2016, peaking at USD8.2 billion in 1Q2012 and troughing at USD864.3 million in 1Q2002.

A key tangent to the 2050 plan, the Astana International Financial Center (AIFC) crystallizes Kazakhstan’s overwhelming commitment to doing business in line with international standards and best practices. Accordingly, modeled on Dubai’s DIFC, the AIFC, set to open in Astana on January 1, 2018, will feature a financial court based upon English law, and will host its own independent arbitration mechanism.

Transparency underpins its strategy, and as a hub for the country’s banks, both native and foreign, it will play a catalytic role in fostering best practices across the economic matrix. In fact, the government envisages the AIFC becoming the fourth leading Asian center of finance after Shanghai, Hong Kong, and Singapore. In attracting FDI, boosting the banking sector and capital markets, then, the AIFC will spearhead diversified economic growth by tapping fresh financial opportunities, all part of the national rebranding. The AIFC will occupy the space dedicated to Expo 2017, which as event Commissioner Rapil Zhoshybayev told TBY, is by no means merely a showcase event. Under the theme of future energy, and with 1,000 participating companies, a tenth of those being local enterprises, “Expo is a locomotive for many sectors, including tourism.”

Data indicates that while private consumption saw mere 1% YoY growth for 9M2016, the public was gradually acclimatizing to the cocktail of weaker tenge, lower inflation, and tougher interest rate credit conditions. Thus, in 2016, it was the external sector that applied the brakes to economic growth. Goods and services exports shed 5.2% YoY for 9M2016, even then an improvement on the leaden contractions of 8.6% in 1H2016 and 8.2% in 9M2015. Exports averaged USD3.4 billion from 1998 to 2016, peaking at USD9.9 billion in June 2011 and troughing at USD286 million in January 1999. Meanwhile, imports for 9M2016 dropped 2.1%, erasing 2.8pp from overall economic growth for the period. Imports averaged at USD2 billion between 1998 and 2016, peaking at USD 4.6 billion in December 2013 and bottoming out at just USD252.6 million in June 1999.
The NBK forecasts inflation declining to between 7.3% and 7.7% for 2017, having declined to just above the upper ceiling of its target range of 6% to 8% last year. Consumer prices climbed 0.8% MoM in January 2017, just shy of December’s 0.9% rise. January’s result stemmed from a slower increase in prices for food, clothing, and transport. Indeed, the 7.9% print in January marked a decline from December’s 8.5%, and hence the lowest rate since September 2015. Encouraged by the pronounced fall in inflation, the NBK cut interest rates in 2016 by a cumulative 500bps, but left them unchanged at its first gathering of 2017.

The industrial front saw increased momentum as industrial production climbed 1.8% YoY in December, bettering the 1.1% rise of November making it four consecutive months of appreciation, and the best performance in two years. December’s growth, while broad based, chiefly relied on manufacturing, mining, and quarrying. Doris Bradbury, the Executive Director of the American Chamber of Commerce (AmCham) in Kazakhstan, told TBY how mining was a priority sector of particular potential, should prevailing concerns for foreign players be remedied. “There is a new mining code [based on the Australian one] currently in draft form that could truly open up the mining sector, as it addresses many of the taxation and legal concerns that hold investment back and prevent large companies from entering.” She cites the case of Rio Tinto, which while present in Kazakhstan for six years, “has not been engaged in mining activities because firm legal rights for concessions have not been established, which in turn has held back investment.” Meanwhile, in mid-January state nuclear agency Kazatomprom confirmed that it would cut uranium output by c.10% YoY in 2017 in light of a global glut denting prices. Uranium prices immediately rose given Kazakhstan’s world leader status in production terms of around 40% of global output.

Official data is encouraging given that industrial output shrank 1.2% in 2016 following the 1.6% shrinkage of 2015. Focus Economics forecasts industrial production growth of 2.4% for both 2017 and 2018.
The Kazakh economy, ceteris paribus, will continue to reflect comprehensive and systematically unfolding economic strategy, while new institutions operating to international standards will attract the FDI needed for extensive privatization. And meanwhile, the stimulus program launched in 2016 will be friendly to the construction sector, offsetting weak bank lending and curbed consumer confidence.