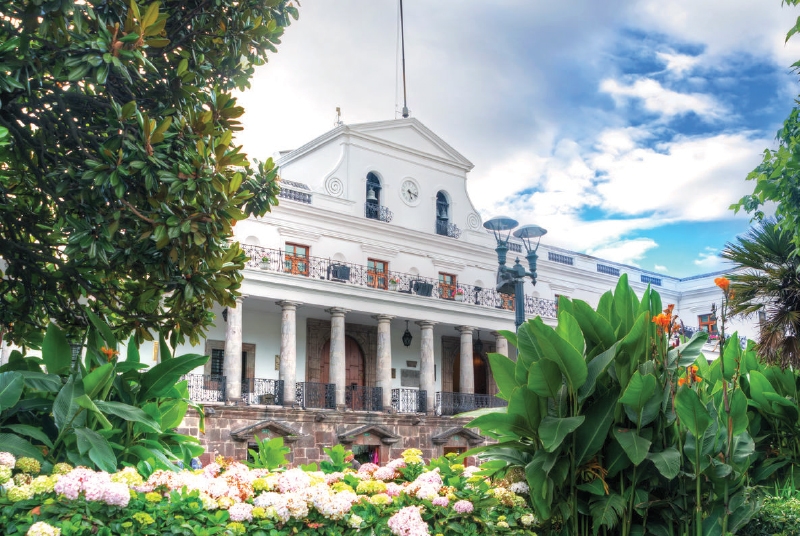 Share on:
Not content with a solid result in the 2013 General Election, President Rafael Correa has now adopted a strategy of increasing foreign trade.

The Republic of Ecuador was founded in 1831, emerging from the collapse of the ill-fated, post-colonial country known as Gran Colombia. This heterogeneous union of the modern day states of Colombia, Venezuela, Ecuador, and Panama fell apart after 15 years of political infighting, leading to the establishment of the former three as independent nations. Peru, which was still under Spanish rule, became a destabilizing force in the Ecuadorean political arena, as the border had never been agreed upon. This, combined with disagreements among disparate segments of Ecuadorean society, primarily the conservatives and liberals, led to a tumultuous period for the young republic, characterized by coups d’etat and military rule.

The early 20th century was a period of liberalization in Ecuador, both economically and socially. Continued disputes with Peru marred relations during World War II, but led to a framework peace agreement called the Rio Protocol in 1942. This did not fully end the conflict, however, and problems remained until the late 1990s when the Military Observer Mission Ecuador-Peru (MOMEP) was set up to broker a border agreement. With the exception of a period in the 1950s when increased exports of bananas created a level of political stability, short-lived governments, many of which were of an authoritarian military bent, marred Ecuadorean politics in the 20th century. A constitution promulgated in 1978 ordered a return to civilian rule, and remained in effect until the late 1990s when it was modified. The 20th incarnation of an Ecuadorean constitution was created in 2008 following the accession of Rafael Correa to the presidency, and is still currently in force.

Ecuador is divided into provinces, municipalities (also known as cantons), and parishes. Prefects manage the affairs of the former, while councilors, mayors, and parish boards are responsible for the latter two subdivisions. Within each canton, the council ensures that local needs are met, carrying out all necessary public works and administering the budget and annual expenditure for the state. These local government representatives are elected for four-year periods, and have a high degree of financial and administrative authority, guaranteed by the constitution, which outlines a vision of a decentralized and empowered nation. Above this level, ministries with specified responsibilities coordinate interactions among the regions.

The 2008 constitution clearly outlines the division of power within the government. The legislative branch is known as the National Assembly, a unicameral parliament with its seat in Quito. The assembly is subdivided among 15 national representatives, and two representatives for each of the provinces, and members for each additional 150,000 citizens or more in a given area, according to the national census. The assembly comprises 124 deputies who are affiliated with 10 commissions and who serve for four years.

National elections held in February 2013 demonstrated a high level of support for President Correa’s Movimiento Alianza PAIS, which won 52.31% of votes, maintaining a considerable majority. Next, the relatively new Creating Opportunities Party (CREO) garnered 11.42% of support, and stood behind the main opposition candidate for the presidency, Guillermo Lasso. The Social Christian Party, with 8.96%, followed, while the January 21 Patriotic Society Party, the Plurinational Unity of the Lefts, and the Ecuadorean Roldosist Party trailed behind with approximately 5% of votes each.

The National Court of Justice is made up of 21 judges who are elected by the Judiciary Council for nine-year terms. This represents the highest tier of the judicial branch of government. The president of this court serves a three-year term. The 2008 constitution safeguards the sanctity of transparent legal practice, ensuring strong training for professionals and aiming to increase efficiency in the system. Recognizing the country’s unique demographic composition, it also allows for the practice of indigenous traditions in the settling of disputes within their communities, provided there is no conflict between these customs and the customary law of the nation. In addition, a Constitutional Court is the authority for all legal considerations related to the electoral process. In 2012, the court took a majority vote to introduce the D’Hondt system of proportional representation. This common method places an emphasis on the highest averages for parties or candidates, and generally allows larger parties a greater share of seats, encouraging stability in parliament and government.

The executive branch of government is represented by the President of the Republic, who manages public administration and serves the dual roles of head of state and head of government. The Office of the President is complemented by that of the Vice-President, and also by the various ministries which oversee the running of the country. The president selects assorted ministers and advisors for their cabinet, and serves for a four-year term. Following the change in electoral method in 2012, and concurrent with the legislature elections in February 2013, voting for the presidency also took place, renewing Rafael Correa’s rule for a second time and guaranteeing his continued leadership until 2017. Competing with seven other contenders, President Correa and running mate Jorge Glas received 57.17% of votes, ensuring that their PAIS Alliance now controls both the National Assembly and the Executive. Opposition candidate Guillermo Lasso of CREO followed behind with 22.68%, while Lucio Gutiérrez of the PSP won 6.73%.

This landslide victory speaks volumes about the successes gained by President Correa’s administration that has been governing since 2007. With his leadership, characterized by canny fiscal initiatives, outspoken and controversial diplomatic overtures, and progressive reform of the political environment of the country, Ecuador is experiencing unprecedented stability. The government has consistently foregrounded a broad strengthening of the economy and its production base, while making dramatic improvements in the lives of those in poverty across the country. Concerted efforts to increase FDI by creating a more welcoming destination for capital from abroad have allowed FDI to jump to over 40% of GDP in 2012. President Correa has a strong background in economics, and has leveraged this knowledge to pull the country out of a cycle of political uncertainty. The growth that has resulted has been shared among the population by boosting the emerging middle class, while the reduction of income poverty levels from 37.6% to 25.5% between 2006 and 2013, and extreme poverty from 16.9% to 8.6% in the same period, has fostered a more inclusive society.

Concern for the well-being of its citizens and the country has earned President Correa’s government high praise from abroad. In particular, enlightened innovations such as the recognition of the rights of nature in the 2008 constitution have helped to establish a new reputation for Ecuador in the world of diplomacy, while domestic support remains strong and a fractured opposition fails to mount serious threats to the governance of the PAIS Alliance. Further recent amendments to the constitution, including a change that would make additional reelections possible, have generated some degree of civil dissent, despite President Correa declaring that he has no plans to do so when 2017 comes around. Additionally, the government’s dedication to more efficiently and extensively utilizing the nation’s mining and oil potential has produced more than just revenue, as select local communities opposed to these projects voice their concerns over its effects. Ultimately, however, a large support base and stronger democratic institutions will guarantee considerable stability for the incumbent government, allowing its program of socially conscious development to continue apace.