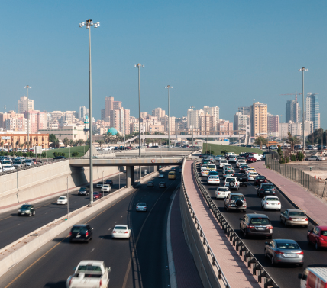 Share on:
The government has earmarked $112 billion for investment across different sectors, including road, ports and airport infrastructure, water, power and social infrastructure, a metro, and national rail network. Widely viewed as an avenue to boost foreign investment, these projects will also incorporate private sector involvement.

Long buoyed by sustained oil demand and high oil prices, the transportation sector in Kuwait is playing a vital role in helping to shape the country’s economy while also serving to distinguish itself from its neighbors. However, its infrastructure is in dire need of overhaul, and the government is taking appropriate steps to maximize both the transformation of its infrastructure network while simultaneously attracting investment. According to a report by KFIB, the government earmarked $112 billion for investment across different sectors, including road, ports and airport infrastructure, water, power and social infrastructure, a metro, and national rail network. Widely viewed as an avenue to boost foreign investment, these projects will also incorporate private sector involvement.

According to an Alpen Capital report regarding the state of the construction and infrastructure industries released in June 2015, by prioritizing such infrastructure projects, the sector is slated to grow by 15-20% by year-end 2015. Major projects include the national railroad, with a projected cost of $10 billion and a completion date of 2018, the Kuwait City metro network, to be completed in 2019 at $7,000 million, and the Sheikh Jaber Al Ahmed Al Sabah Causeway to be completed in 2018 at a cost of $2.6 billion.

Kuwait’s sole civilian airport, Kuwait International Airport, serves as a hub for both Kuwait Airways and Jazeera Airways. Though designated as such, the airport also has Al Mubarak Air Base within the compound, which serves as the headquarters for the Kuwait Air Force. In 2013, there were 67 different airlines operating within the country, and the Central Statistical Bureau reported that the airport can accommodate 47 aircraft on its tarmac. In 2013, the airport saw 9,376,618 passengers, though an increase in these figures has led to an ambitious renovation plan that will accommodate the increasing traffic. However, the expansion has experienced multiple delays, further complicating the current increase in passenger load and what is expected in the near future. In order to alleviate this issue, the government announced in October 2015 its intention to build a terminal capable of handling 5 million passengers annually in the interim. According to the trade publication Construction Week, the new terminal will increase the airport’s total capacity to 10 million passengers each year, and construction costs are estimated to be around $4.35 billion. Overall, the comprehensive expansion project is slated to boost capacity to over 25 million passengers a year.

The private sector is predicted to play a significant role in expanding the aviation industry in the near future. In an interview with TBY, HE Fawaz A. Al Farah, President of the Directorate General of Civil Aviation (DGCA), described the importance of utilizing Kuwait’s private sector: “The private sector has ample opportunities to participate in these development projects, and also in offering services at Kuwait International Airport, such as handling and passenger services. The company we will create to manage Kuwait International Airport will be able to sign and make contracts and agreements with other airport operators and service providers, so they will have access to international expertise in terms of managing the airport.”

The country has two national carriers: Kuwait Airlines, the national flag carrier of the country’s aviation sector, with services also offered by Jazeera Airways. In 2013, the Kuwait Central Statistical Bureau recorded 37,904 scheduled and 1,160 unscheduled aircraft movements inbound, while outbound movements numbered 37,916 and 1,155 scheduled and unscheduled, respectively, for a total of 75,820 schedules and 2,315 unscheduled for year. The airport has experienced fluctuations in movements; in 2008, there were 58,657 total scheduled movements, which surged to 75,499 in 2009, only to fall to 68,474 in 2011. Scheduled passenger movement in 2013, according to the Central Statistical Bureau, was 9,201,842, an increase from 2012’s 8,719,159.

Road infrastructure was the second-largest category in infrastructure construction (after energy). It is necessary—the total number of vehicles on the road increased from 1 million in 2012 to 1.7 million in 2013. According to the Kuwait Central Statistical Bureau, there were over recorded 1.9 million vehicles operating in 1H2014. Total investment in new highways is expected to reach $2.1 billion in 2017.

While Kuwait has sufficient infrastructure in other transport areas, its land transport is the process of being updated. In 2010, the United Nations Development Program (UNDP) launched a project with Kuwaiti officials in order to “develop an efficient traffic demand management, road safety, and enforcement system, integrated information system, institutional reform, efficient taskforce, and monitoring and evaluation system that will assist planning, implementation, and management of sustainable transport system.” The project is expected to be completed later in 2016 at a cost of around $10.4 million.

While road-building is a top government priority, this endeavor is often eclipsed by the more prominent metro and railroad projects. Bearing in mind the importance of improving public transportation in relation to economic progress, Kuwait has recently announced that bidding for the long-delayed metro system project, bidding for the Kuwait Metropolitan Rapid Transit System (KMRT) will begin in early 2016. The KMRT system will, according to the government’s Partnerships Technical Bureau, it will consist of “an integrated network-unified fleet and limited passenger interchange,” comprised of 69 stations and a total length of 160km with 68 stations (60% of them being underground). A state of the art network, the trains will be driverless and have an operating speed of 90kph. The system, which is expected to cost upwards of $7 billion, is expected to be completed in five separate phases. The first phase would link the rail freight depot—which is to be connected with the GCC rail network—with Kuwait International Airport and into Kuwait City and construction is expected to commence in 2020.

Also slated to begin in the first quarter of 2016 is Kuwait’s National Rail Road (KNRR). A key infrastructure development, the KNRR will “enhance Kuwait’s regional integration, boost trade volume, and create new job opportunities,” according to the government. It will streamline the network between Kuwait City and the country’s airports and seaports, as well as link Kuwait in to the rest of the GCC network. With an expected length of 511km double track, the KNRR will “serve freight and passengers and will have a 120kph regional lines speed and a 200kph high speed.”

Kuwait has two dry cargo ports, Shuwaikh and Shuaiba, and three oil terminals: Mina Al Ahmadi, Mina Al Shaiba, and Mina Al Abdullah. Shuwaikh port is located on the Kuwait edge of the Gulf, providing a strategic foothold. Kuwait’s most crucial port, it occupies a total land area of 3.2 million sqm and 1.2 million sqm water basin area. According to the Kuwait Ports Authority, the total length of all berths combined is 4,055m. Port traffic passes through a 8km long, 8.5m deep channel, allowing Shuwaikh to receive vessels of 7.5m draft in any tide level and vessels of 9.5m during high tide.

Shu’aiba Port is located 45km south of Kuwait City and was built with the intention of serving the greater Shauiba industrial area, which is the largest designate area that includes oil refining, cement manufacturing, and gas liquefaction. The port is bounded by the Southern Pier of Ahmadi Port from the north and the Mina Abdullah port from the south. The port is 4,068m in length and contains 20 commercial and container births that range in depth from 10-14m. Four berths are used specifically for container vessels, and the port offers facilities for general cargo, containers, tankers, and barges.

In Kuwait, cars rule. The city is designed with the car in mind, as opposed to the bicycles or pedestrians, and when it comes to getting around, driving is the most viable and safe option. This urban reality has been brought into question with the recent socio-economic growth of the local population and city areas, triggering growing concern regarding the congestion occurring on Kuwait’s roads, and encouraging authorities to get the $7 billion city metro plan moving again.To optimize efficiency, trains within Kuwait’s upcoming metro system will be driverless, running at a maximum speed of 100kph. The network will be completed in five phases and will include four metro lines, 60% of them underground. With tendering expected to begin in 2016, Kuwait’s multi-billion dollar, 68-station, and 160-km metro project will link to the country’s railway network project, also up for bid in the same year. To spur economic growth and enhance efficiency in Kuwait’s urban transportation network, the government is looking to improve the local public transportation systems by way of the new metro—a key project in Kuwait’s Vision 2035.