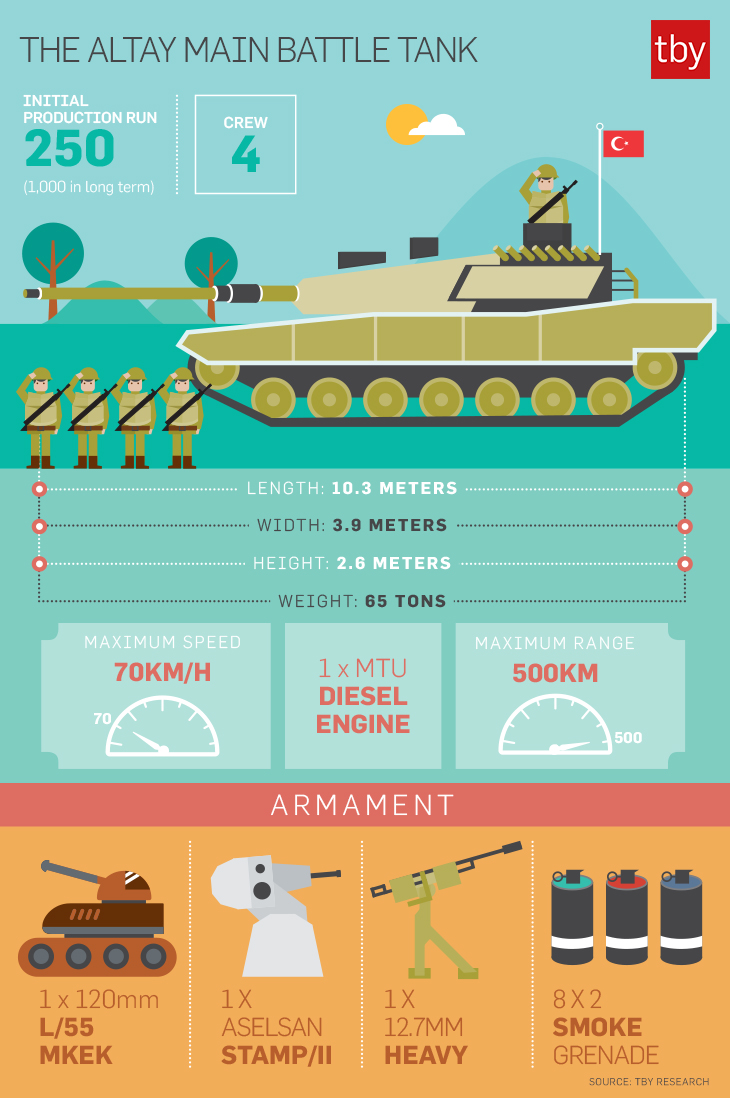 Share on:
The Altay Main Battle Tank is a result of Turkey's push to develop indigenous defense solutions, and puts the country's military in the big leagues.

When Fahrettin Altay, Commander of the 5th Cavalry Corps, led a charge behind enemy lines at the Battle of Dumlupınar during Turkey’s War of Independence, little did he know that his name would one day grace the soon-to-be-born Republic of Turkey’s first indigenous main battle tank (MBT).

Originally conceived in the mid 1990s, the ball was set rolling in 2008, when the Turkish Armed Forces (TSK) awarded the $494 million project to local automotive manufacturer Otokar, which is partly owned (45%) by one of Turkey’s largest business groups, Koç Holding. The project is currently in the testing phase, which is expected to be completed by end-2015 with Otokar now in the running for the mass production phase. Four batches of 250 units are set to be produced, at up to $6 million a pop.

The MBT boasts a 120mm main cannon and is protected against chemical, biological, and radioactive attacks. Looking to stand shoulder to shoulder with some of the world’s finest machinery, such as Germany’s Leopard 2 and the US’ M1 Abrams, the tank has a maximum speed of 70km/h and the ability to function under just over 4 meters of water. But Otokar isn’t going it alone, with many other Turkish firms getting in on the deal. Aselsan is developing the sub-systems and fire control system, MKEK the main gun system, Roketsan the armor package, and Rotem the technical support. The TSK has had the foresight, however, to seek some foreign input, with armor tech borrowed from the South Korean K2 Black Panther, which the Altay resembles, albeit with a re-designed turret. And with an eye on NATO, the defense bloc of which Turkey is a member, the Altay features a Standardization Agreement (STANAG)-compatible targeting system.

But Altay’s future isn’t just in the TSK, with a number of countries having expressed early interest. At a press conference back in 2010, when the Altay was first released to the public by the Undersecretariat for Defense Industries (SSM), a Colombian military envoy was present in order to gain information, with Saudi Arabia and Azerbaijan also later expressing interest. But for now, Otokar is quietly awaiting the announcement of the mass production tender. Exactly 250 units are expected to role off the production line within five years. The first batch, as well as the second, will utilize a multi-fuel diesel engine of 1,500 horsepower, while the second 500 will be an indigenous 1,800 horsepower multi-fuel diesel engine.

Otokar is just one of many local defense manufacturers that are benefitting from an increase in local spending, the share of which has increased from 37% in 2006 to 52% in recent years. The figure is expected to grow to 70% by 2016.