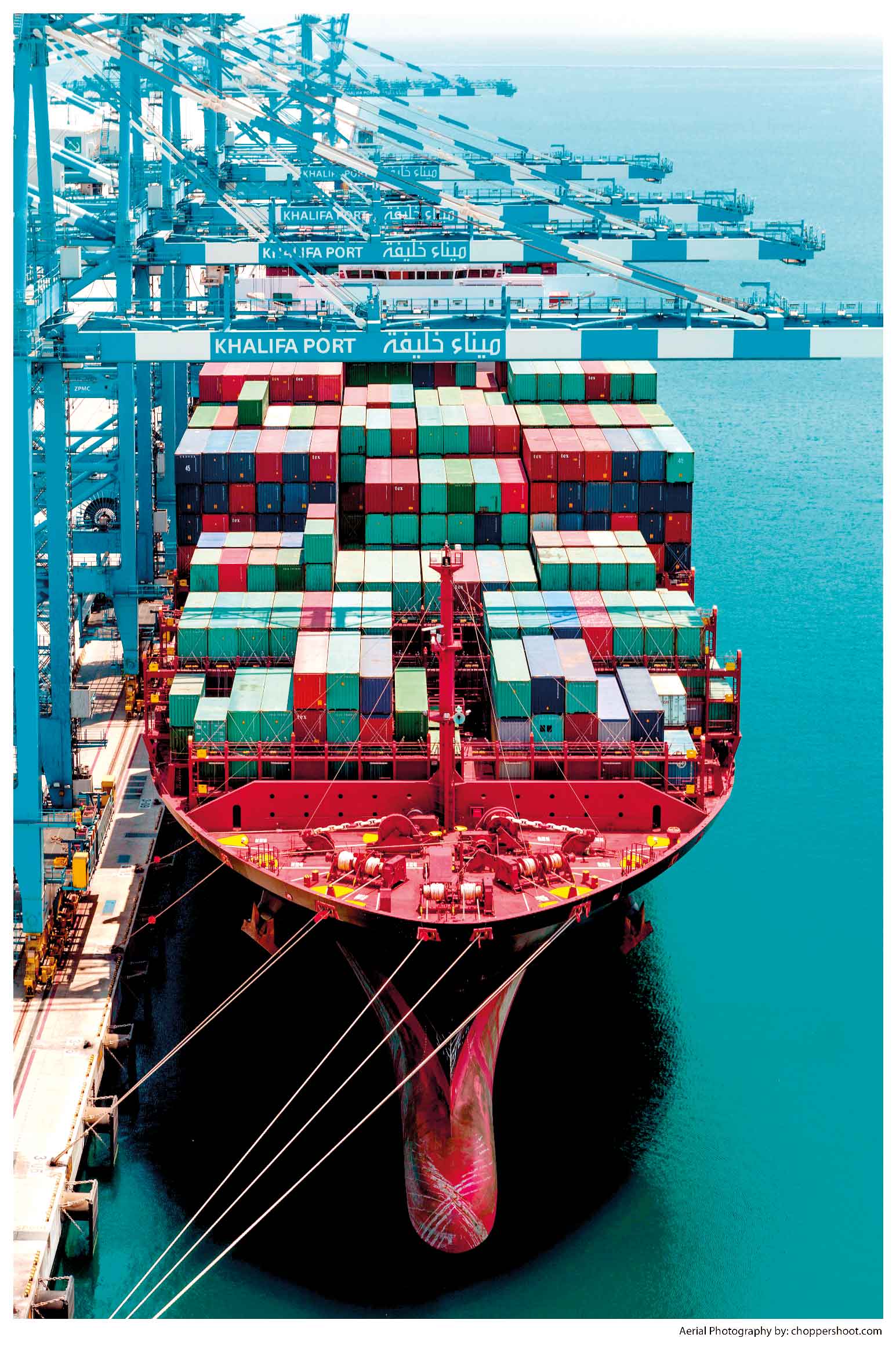 Share on:
Abu Dhabi has launched a number of strategies to prepare the groundwork for turning the Emirate into a regional hub for transporting cargo and passengers.

Any aspiring economy in this modern age realizes the importance of having a developed network of transport infrastructure. The need to move goods and people quickly and efficiently is key and Abu Dhabi has set in motion a number of strategies and projects to keep one step ahead of the game. Vision 2021 and the Surface Transport Master Plan (STMP) both look to address current bottlenecks in the Emirate’s network and help create a hub for both the UAE and region when it comes to moving goods and people.

Between 2015 and 2017, transport projects totalling over $20 billion are scheduled to be awarded across the UAE. All investments in Abu Dhabi are in-line with the STMP. The STMP was first commissioned in 2008 by the Department of Transport (DoT) when it wanted to develop a detailed master plan and implementation program for the city of Abu Dhabi and the rest of the Emirate when it came to its transport network. The STMP also crosses over with Plan Abu Dhabi 2030: Urban Structure Framework Plan (Plan 2030), which was created under the vision of HH Sheikh Khalifa bin Zayed Al Nahyan, President of the UAE and Ruler of Abu Dhabi to fulfill the idea of Abu Dhabi as an evolving global destination. By 2030, the STMP aims to have established a multi-integrated transport system of regional rail, metro rail, trams, buses, taxis, park and rides, highways, and more. Any project being implemented in the transport sector will be in-line with the targets of the plan.

The largest project in the whole region is the Gulf Railway Network; a six nation project aimed at linking the GCC countries via a 2,177km railway. Initially announced in 2013, an ambitious deadline of 2018 was pencilled in. Each country would construct their section of the railway to create an alternative transport system to air and sea. The Etihad Rail Network, the UAE’s sections of the GCC Railway, will cost around $11 billion when complete and provide both freight and passenger services. However, in recent times the project has started to experience some problems, largely due to low oil and mineral prices. When the project was first announced, budgets were created on the barrel being close to $100; however, with the price less than half that, cash flows have started to dry up and countries are starting to tighten their belts. In February 2016, Etihad Rail announced it was introducing a restructuring initiative across the company to streamline its operations, which included a number of staffing adjustments. Etihad Rail has said it will cut around 30% of its workforce in a bid to trim costs; however, it has not abandoned the project. It is expected to award Phase II of the project soon, which will connect the ports of Mussafah, Khalifa, and Jebel Ali to Saudi Arabia and Oman via a 628km stretch of railway. In May 2016, Oman also announced it was struggling to keep up with the deadlines for the project and the low mineral and oil prices, and it was going to suspend construction of the railway until further notice. Oman’s Ministry of Transport and Communications was clear to state that is had not cancelled the project, but had put a freeze on it until the economics of the project become more viable. The 2018 deadline for the railway looks in serious doubt now and the possibility of Gulf States working solo on the project and finishing it at their own leisure is looking more likely, unless there is an uptick in oil prices in the coming months.

While interregional connectivity is struggling to maintain its momentum in terms of rail links, city-wide rail projects are moving full-steam ahead. The Abu Dhabi Metro is the archetypal STMP project. It will combine buses, trams, and an underground rail network to link the major sites and areas of Abu Dhabi. First announced in 2013, the Metro will consist of four main lines that will cover 131km once complete, with 18km of underground rail lines and two light rail lines and rapid bus transit. Phase I was hoped to have been completed by 2015; however, due to delays contracts were awarded in 2015 with construction looking to be complete by 2017. Phase I will cost around AED7 billion and connect communities including Saadiyat, Yas Island, Al Raha Beach, as well as Abu Dhabi International Airport and the Central Business District. The Metro will help to alleviate the Emirates’ traffic congestion and create a more sustainable transport system. An initial date of 2020 was set for the completion of the metro system in Abu Dhabi, but with the current delays the date may move back. The Metro will also hope to connect to other metro systems in the different Emirates to create a nationwide passenger transportation network.

As the delays for the Gulf rail network mount up, the maritime sector will remain the main means of mass freight transportation in the region, and especially beyond. In 2015, a total of 41,645 vessels entered Abu Dhabi’s ports—Zayed Port, Khalifa Port, Musaffah Port, Free Port, and Mughareq Port—carrying 15.29 million metric tons of cargo, of which 14.34 million metric tons was discharged and 952,874 million tons was loaded. A total of 1.5 million TEUs passed through Abu Dhabi’s ports, with 751,745 TEUs being discharged and 752,548 TEUs getting loaded onto vessels in 2015 according to the Abu Dhabi Port Company. The volume of vessels, cargo, and TEUs all grew compared to 2014, which is a testament to the Emirate’s growth strategies. Abu Dhabi Ports is celebrating only its 10th Anniversary in 2016. During this time, it has helped to create stable and sustainable growth in container cargo, general and bulk cargo, and the cruise ship sector, while the flagship port of Khalifa was ranked third in the world and first in the region for the highest growth rate in 2014-2015 according to the Global Competitiveness Index. Much of this success has been down to diversification and the upsurge in free zones around key ports, specifically Khalifa Industrial Zone (Kizad), which has become integral to the port and the Emirate’s economy. A study completed by Abu Dhabi Ports on its contributions to the sector, and verified by the Statistics Centre Abu Dhabi (SCAD), showed that the company contributed more than AED14billion to the Emirates’ GDP in 2014 and generated more than 39,000 direct and indirect jobs. The company’s activities also accounted for 2.9% of the Abu Dhabi’s non-oil economy. This contribution is expected to increase further as Kizad attracts more investment and the economy continues to diversify. On top of this, in December 2015, the state-of-the-art Abu Dhabi Cruise Terminal opened ushering in a new era of cruise tourism for the Emirate. The number of cruise tourists visiting Abu Dhabi during the 2015-2016 season hit 205,000 passengers, which represented a five-fold increase on the Abu Dhabi Ports’ first cruise season of 2006-2007. Zayed Port is quickly becoming a premier regional hub for the cruise industry, as well as general and bulk cargo.

While the cruise ship sector is beginning to bring in more passengers, the king of people transport is still the aircraft, with the throne being Abu Dhabi International Airport. In 2015, a total of 23.1 million people passed through Abu Dhabi International Airport compared to 19.6 million in 2014 according to Abu Dhabi Airports Company. Every month in 2015 saw and increase on passenger numbers compared to the previous year. Freight also saw a slight increase in 2015 with 458,562 metric tons coming into Abu Dhabi compared to 431,139 tons in 2014, and 368,897 tons leaving Abu Dhabi compared to 365,930 in 2014. Oddly, however, the number of vessel movements in 2015 actually dropped at Abu Dhabi International Airport, with 169,989 arrivals and departures in 2015 compared to 186,207 in 2014 according to Abu Dhabi Airports Company. The importance of aviation is not lost on the government if it wants to create a competitive regional hub for transporting goods and people. Therefore, to help promote itself, the first-ever Abu Dhabi Aviation and Aerospace Week was launched in May 2016. Leaders in the aviation and aerospace sector from around the world met in Abu Dhabi to discuss the pressing issues of the time. One of the main topics under discussion was a call for Arab economies to diversify away from hydrocarbons to create a more sustainable region. With three major airports in close proximity as well as three major airlines in the region, among others, competition is tough. GCC airlines have also ordered a large number of aircraft in recent years attracting large numbers of pilots, engineers, and technicians to the region. The Abu Dhabi Aviation and Aerospace Week cemented the role of the Emirate as a hub and leader in the sector across the region allowing it to share key insights, best practices, and develop new relationship to increase the competitiveness of its airports and services.