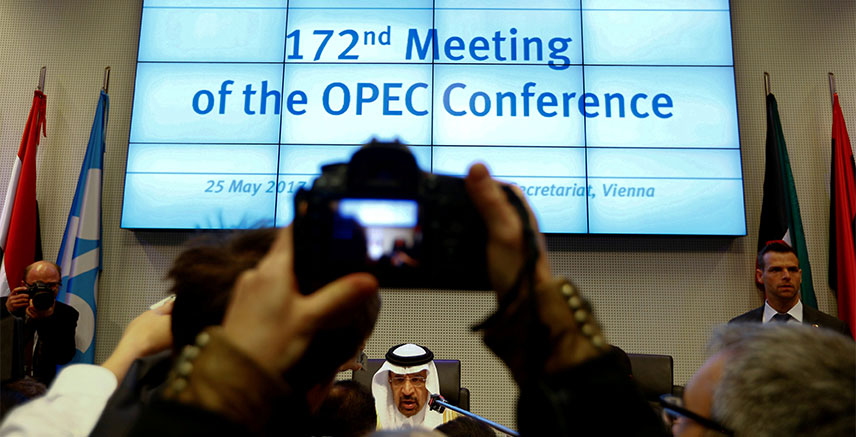 Bottom of the Barrel

Share on:
There were no major surprises at the close of OPEC’s meeting last Thursday in Vienna, except perhaps at how unsuccessful OPEC has been at managing market expectations.

OPEC President Saudi Arabia’s Energy Minister Khalid al-Falih talks to journalists before the beginning of the OPEC meeting in Vienna, Austria, May 25, 2017

Financial markets are greedy, the oil market no less than the rest. One month ago, nobody knew what the Organization of Petroleum Exporting Countries (OPEC) was going to do when its six-month 1.8 million bopd production cut came to an end.

Then, progressively, through the words of Russian and Saudi dignitaries, it became clearer and clearer that OPEC would not suspend the production limitation and the question remained only about how long the cuts last and how deep they would go.

That was mistake number one.

The impact of the news was quickly factored into the commodity’s market price, climbing a few dollars over the following days.

It also became apparent that the markets expected more than just a 6-month extension. OPEC meetings are well known for their 11th-hour twists and with investors craving a return to the era of high-oil prices.

These statements were backed by the Russian and the Saudi oil ministers, and then supported by other OPEC members.

Mistake number two: the price of crude oil climbed by 3.3% as a result, but what the markets now expected, was a 12-month extension or a larger production cut, anything to encourage oil futures trading and to give a glimpse of hope to an actual end to the glut in oil inventories across the world. Alas, there was nothing, no surprises. What had been stated was what was approved, a 9-month extension for the 1.8 million bopd cut, which resulted in inevitable disappointment. For a month, expectations had been mounting and suddenly there was no surprise, no out-of-the-box solution. The price of crude fell 5%, recovering slightly by end of the week, at a 3% loss.

The production cuts put in place since January 1 have hardly met OPEC and its allies’ expectations. International oil inventories remain historically high, far above the 2.7 billion barrels of oil five-year average goal that OPEC has imposed on itself to once again balance the oil prices.

Besides financial market hysteria, there are a few other issues with OPEC’s cut extension. Over the last five months, oil inventories have shown little reaction to the production cuts and have only now started to subside, and then only slightly, particularly taking into account the recent rebounds in both Libyan and Nigerian production.

In addition, the fact that Iran, one of the main instigators of the initial production cut agreement, remains outside the conditions imposed by the agreement made by the cartels and other non-member allies.

In a way, the simple fact that some OPEC members are managing internal conflict and coming back to stable production is damaging the group’s efforts. Not to forget that Saudi Arabia is about to undergo the world’s biggest IPO in 2018 when it floats 5% of its national oil company Saudi Aramco in the international market and it needs high oil prices to further attract investment.

However, the main problem still remains. North American tight oil remains the main target to hit, and yet it is a target that seems harder and harder to overcome.

When OPEC decided to react to the oil price drop with strengthened production to drive off the American tight oil industry with low oil prices back in 2014, it succeeded only in strengthening it.

Yes, many small companies went bankrupt and production slowed down as prices dropped below production costs, but over the past three years investment in new technologies and processes used in fracking extraction have greatly reduced the cost per barrel, making it much more competitive.

Also, as is the nature of unconventional oil extraction, wells can quickly be closed and reopened every time the global price makes then profitable. This means that every time OPEC cuts production to push oil prices up, a number of tight oil wells open up and start producing in the Permian Basin in the US, pushing the price down again and effectively just cutting into OPEC’s market share.

The cartel is finally understanding that rather then trying to annihilate the US shale production it has to find a way to co-exist with it, although how to do so seems less clear than ever.

In the meantime, two factors overshadow the industry’s near future: the growth of global demand for oil continues to slow down with no signs of change, while interest in renewable energy sources reaches historic highs making these progressively more competitive against oil.