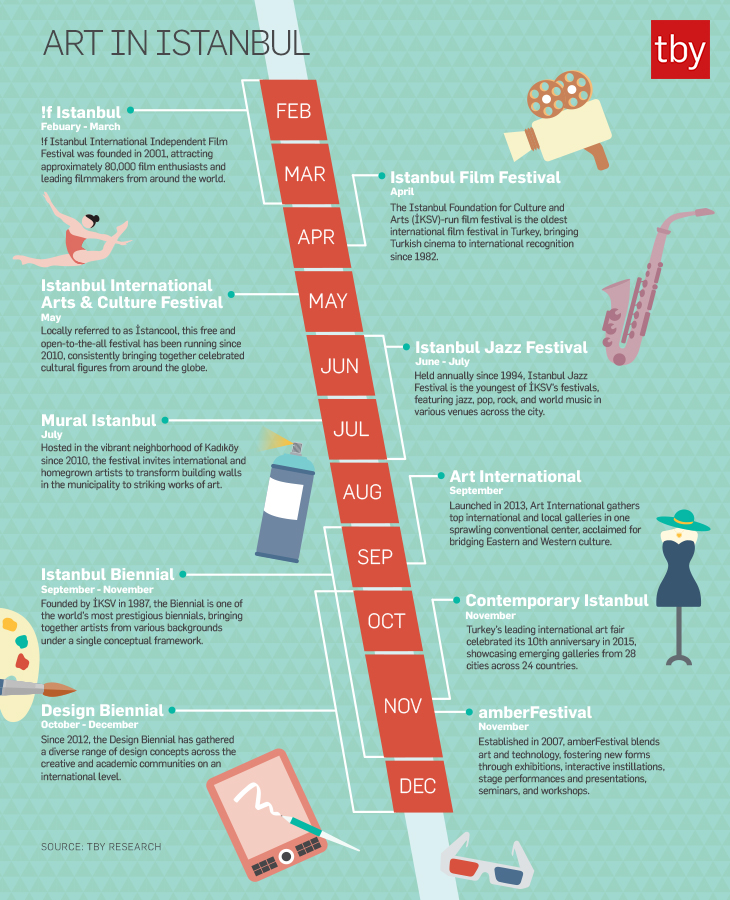 Now For Something Completely Different

Share on:
Famous the world over for its ancient and Ottoman-era monuments, Istanbul is rapidly becoming known for the its thrusting and edgy contemporary art scene.

Like all great cities, Istanbul’s capacity to reinvent itself seems to know no bounds. Its historic sites are among the most visited in the world: attractions such as the Blue Mosque, Aga Sofia, and the Grand Bazaar draw year-round crowds and queues. Countless thousands visit the opulent palaces of the Topkapı and Dolmabahçe every month, drawn by their elegant Ottoman splendor and a centuries-old culture with wide influence across the Middle East. Museums such as the Istanbul Archaeology Museum still draw huge crowds to gawk at such exquisite objects as the 4th-century Alexander Sarcophagus.

In the 21st century, however, as much emphasis appears to be placed on contemporary creations as those of the distant past. Witness Istanbul Modern: the impressively vast home of the country’s largest modern art museum. Founded in 2004, the 8,000-sqm site is devoted to promoting modern and contemporary Turkish art to the world. Judging by the impressive visitor numbers, it seems to be succeeding. Its setting, in a huge former warehouse on the Bosphorus, forms a key part of the Istanbul Biennial, and has encouraged many more galleries and art spaces to spring up in the Karaköy and Tophane neighborhoods.

Art sometimes works best when it combines the old with the new. Nowhere does this more effectively than Misir Apartmanı, on Beyoğlu’s elegant yet perpetually mobbed Istiklal Caddesı. The beautiful 19th-century building houses perhaps the most influential gallery in Turkey, Galerist.

Next door (one floor up), is Galeri Nev, which first opened in Ankara in 1984. A calmer, more refined, approach than its rowdier neighbor, Galeri Nev strives to set the art in historical context, yet never seems to shy from the controversial or the unexpected.

Santral, overlooking the Golden Horn, is perhaps the most out-ward looking of the modern art venues, embracing artists from Germany and Italy to Colombia. The venue is an enormous disused Ottoman power station, the imposing industrial building brought to life (especially at night) by an impressively beautiful lighting system: as powerfully subtle as some of the art inside.

Also on Istiklal is the Yapi Kredi Kültür Merkezi: a bank’s very own cultural center devoted to photography, art, and even archaeology.

Just as swift rise of Istanbul’s museums has been the events that together put the city firmly on the international art map. Running from September to November each year (see opposite), the Istanbul Biennial is perhaps the most famous of these. Its first year was 1987 and, since then, it has grown into one of the world’s most prestigious biennials—and has developed a reputation for its biting commentary on regional politics and conflicts, in particular. The Biennial is the largest art exhibition of its kind anywhere in the region, widely respected for its independent voice. Unlike other world-renowned biennials, the Istanbul Biennial is artist-centric: an exhibition model allows the artists to define the dialogue or debate, rather than working through a country-defined national platform.

With nine other Istanbul arts festivals having started in the past 20 years alone, the city’s embrace of contemporary art shows no sign of loosening any time soon.