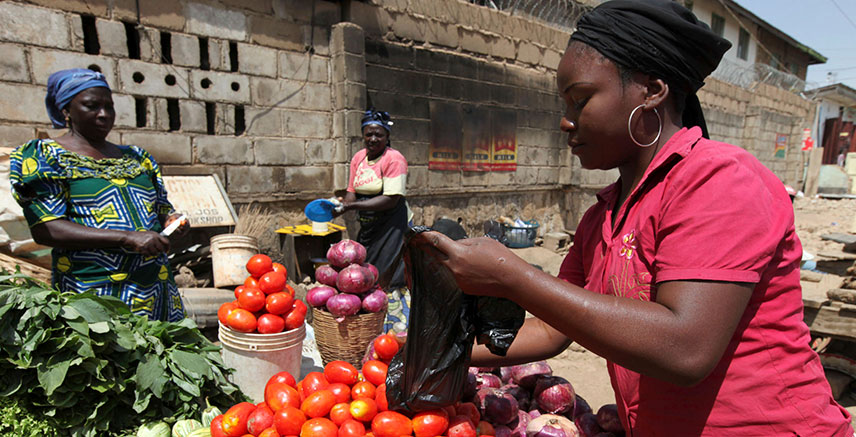 What’s Tomato with You?

Share on:
After last year's pest damage, thousands of farmers in northern Nigeria are not growing tomatoes this year, setting the country's tomato processing ambitions back considerably.

A woman sells tomatoes at a roadside grocery stall in Nigeria’s central city of Jos.

The common Westerner is often surprised to learn about Nigeria’s tomato export ambitions. Just as the likes of Ghana and Cote d’Ivoire are famous for their cocoa beans, and Zambia and South Africa for their livestock, Nigeria is hoping to become known internationally as a tomato producer.

Tomatoes are the world’s most plentiful fruit, with more than 130 million tons produced every year, mainly in China, India, the US, the EU, and Turkey. These five entities combined account for 70% of global production

Agriculture, as a sector that employs over 70% of Nigerians yet represents less than 22% of GDP, is often described as the country’s new oil, in reference to the economic potential of the sector. With the capacity to defeat the four horcruxes of Nigeria’s economy, namely underdevelopment of the agriculture in the north, rising unemployment, the growing appetite of a fast-growing population, and a significant cut in the country’s import bill, agriculture could solve many problems.

Even with 900,000 tons of wasted tomatoes each year, the country still imports around USD2 billion worth of agricultural goods each year. And even though the country produces 65% of West Africa’s tomatoes, it is also the largest importer of tomato paste in the world.

In addition, the segment has been recently suffering from another dose of bad luck in the form of the tuta absoluta moth. Native to South America, the moth eats the entire tomato plant and can destroy the whole crop in a matter of weeks. In 2016 officials estimated that up to 80% of tomato farms had suffered from moth infestation, leading to a 400% price increase. People ended up paying around NGN1,880 for four tomatoes, when the previous year the same pack would have cost just NGN300.

This put a huge strain on tomato processors in the country. Chief Eric Umeofia, CEO of Erisco Foods, aside from being well-known for his tomato-themed printed shirts, operates the fourth-largest tomato processing plant in Nigeria. In a 2016 TBY interview, he explained how the plant was capable of producing 450,000 metric tons of tomato paste and ketchup a year, but due to the moth infestation was operating at less than 20% capacity.

This year, after suffering from such poor returns on the little red fruit, thousands of farmers are wary of planting the crop. Aliko Dangote’s company, Dangote Farm Ltd, which has the capacity to produce 400,000 tons of paste annually and handle 1,200 metric tons of tomatoes each day, is feeling the effects.

Around 8,000 farmers in the Kadawa Valley, near Kano, had signed up to supply the factory, and as such were guaranteed a price of USD700 per ton, a substantial amount considering the average return of USD350 on the domestic market. This is still not enough to tempt farmers, who simply are not planting the crop.

The factory had started operations in March 2016, but closed a month later when the first wave of moths hit. Since then it has opened and operated in fits and starts.

The government attempted to help and in March 2017 raised tariffs on tomato concentrate imports from 5% to 50%, putting in place an additional levy of USD1,500 per metric ton. They also totally banned the importation of tomato paste and powder in a last-ditch attempt to revive the sector and help the industrialists who had heeded the Central Bank and government’s call to build the country’s tomato processing industry.

The legislation attempted to help the whole chain, classifying greenhouse equipment as agricultural equipment so it would fall into the zero percent import duty bracket. The value of imported tomato paste in Nigeria is estimated to be USD170 million, with a further USD50 million spent on tomato concentrate.

Almost as soon as the government began supporting agricultural self-sufficiency, embracing policies that not only work toward greater food security but toward developing the war-torn north of the country, the moths began to wreak havoc.

With few effective insurance schemes for farmers in Nigeria, and even less access to cheap finance for fertilizers and pesticides, it will take time and trust to coax farmers back to the crop, and hopefully more initiatives to support the first link in the chain.