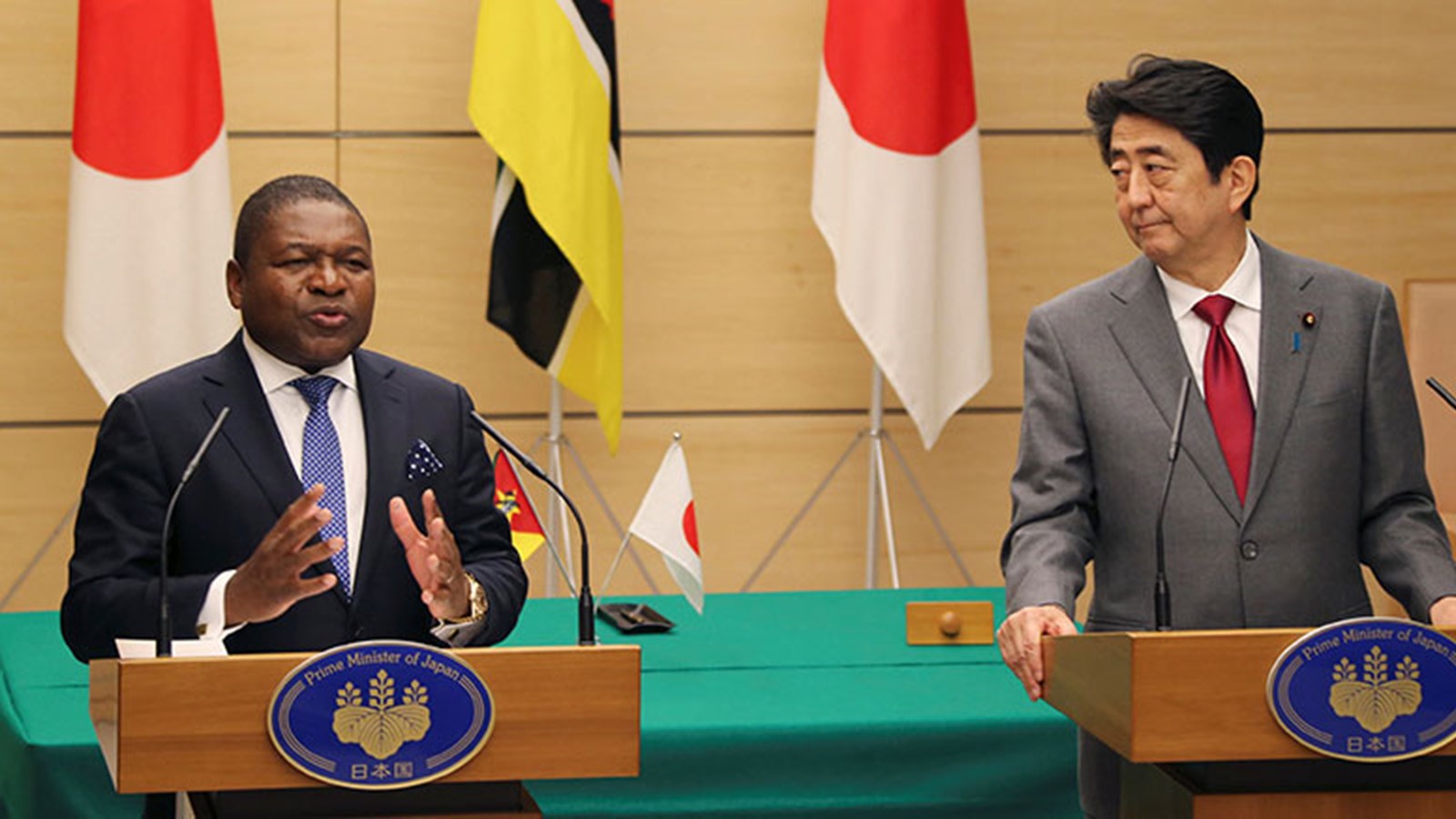 Stepping on the Gas

Share on:
Celebrating 40 years of diplomatic relations with Japan, Mozambican President Filipe Nyusi is visiting the Asian nation this week seeking greater economic integration and a new market for the sale of its yet to be produced liquefied natural gas (LNG).

At the invite of Prime Minister ShinzÅ Abe, Filipe Nyusi, Mozambique’s President, is leading a four-day visit to Japan accompanied by an entourage of ministers and high-level officials from all sides of the industry, and will also attend the Mozambique-Japan Business Forum. The goal is to seek in the Asian country a new buyer for Mozambican gas and an intensification of Japanese investment in the East African country.

Nyusi met with PM Abe and Emperor Akihito to debate the strengthening of economic and political ties between the two countries, at a moment when Mozambique seeks to assure it manages to secure long-term gas agreements for its 160 trillion cubic feet (tcf) of natural gas located mostly offshore in its territorial waters, particularly in blocks 1 and 4, in the Rovuma basin. It must be noted that Mitsui, a Japanese exploration and production company, holds a 20% share in block 1, led by North-American Junior oil company Anadarko. The Mozambican representatives have already met with the Japanese company, which is also currently in talks to invest on a 15% stake in a coal mine in the Nacala Logistics corridor, owned by Brazilian monolith company Vale.

Besides the celebrations of 40 years of bilateral political relations, the timing of this visit is important. Just last week, Exxon Mobil announced the purchase of a 20% stake in ENI-led block 1, which could soon see the first actual development of LNG coming out of Mozambique through a floating liquefied natural gas (FLNG) production facility with a processing capacity of over 3.3 million tons of liquefied gas per year, as soon as a final investment decision is made by all parties. While this development will focus only on the Coral South field, of which all production has already been purchased by BP, Mozambique still holds enormous amounts of natural gas that it wishes to start producing as soon as possible and for which it will need to find long-term clients.

It is generally understood that the USD2.8 billion ExxonMobil purchase of Block 4 bodes well for Mozambique’s at times doubtful future as a gas producer and that it will have the potential to further expand on the country’s ability to sell its gas worldwide. Mozambique is perfectly located to export gas to Asian markets and holds enough proven reserves to become the third-biggest LNG producer in the world.

Now, why Japan? Since the Fukushima incident of 2011, all of Japan’s nuclear reactors have been halted for maintenance, and not all of them have been put back online. This has caused considerable strain on Japan’s energy supply matrix and forced the country to increase its already considerable bet on thermal power plants using natural gas as feedstock. In 2015, Japan consumed 4.4tcf of natural gas, or 32% of global demand, most of it supplied via imports, making it, by far, the biggest LNG importer in the world, while also ranking in the top-four of coal importers.

It is within this context that Nyusi and his entourage visited, on Tuesday, Tokyo Gas, Japan’s biggest gas utility. Tokyo Gas alone imports around 14 million tons of natural gas per year from 12 different suppliers in producing countries like Australia, Malaysia, and Qatar. The company’s management has stated that it wishes to diversify its supplier base to be less exposed to differences in different pricing systems. Its executive manager, Kentaro Kimoto, has confirmed interest in acquiring Mozambican gas, but it seems the intension of closing down a deal for future natural gas production has not yet materialized. Tokyo Gas has reportedly been looking at US shale gas exports, which is surprising seeing that natural gas in Asian markets is pegged to the price of oil, which has remained much more depressed than US shale, which is measured by the independent Henry Hub benchmark.

Besides natural resources, Nyusi takes with him another issue to solve. ProSavana, an industrialized agricultural development located in Northern Mozambique, and which brings together Mozambican, Brazilian, and Japanese investment, has faced many setbacks. Not least, fierce protests at home where locals and opposition parties criticize the project for its potential environmental risks and for displacing many villagers to marginal rural areas.

While success has been achieved in curbing some of this criticism, particularly through financial contributions for the communities and civil society organizations, popular resistance remains a challenge. Launched in 2011, the project was supposed to involve 19 districts through the Nacala Corridor and cover 11 million hectares of land, an area bigger than Malawi. The idea of transforming subsistence agriculture into an industrialized sector could contribute to not only feed the country but also aim at food exports.

The project has since stalled as popular opposition fears a system of monocultures directed at exports will not benefit the local population that today occupies the area. Nyusi will use his visit to Japan to try to reactivate the project with further Japanese support. As State visits go, this is an important one for Mozambique, which has been facing crushing debt and internal instability, and is seeking any alternative to re-start industrial development and avoid financial collapse.