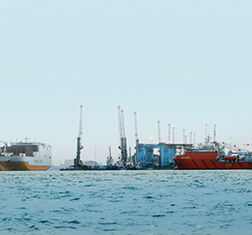 Share on:
Though Nigeria's transportation sector still has room to improve, investment, innovation, and vision promise to bring the nation closer to realizing its ambitions than ever before.

Aregional leader in transportation, Nigeria has one of the most advanced transportation infrastructure setups in the region. Nevertheless, sizable expansion is necessary to keep transportation shortfalls from hampering Nigeria’s ambitious economic goals. The government, private industry, and various community stakeholders all recognize the centrality of infrastructure, and plans are afoot to ensure that transportation propels Nigeria forward instead of keeping it back. Though depressed global oil prices have put pressure on federal and local budgets, Nigeria is on track to achieving its various transportation goals.

According to the National Planning Commission, Nigeria’s national road network stretches across 200,000km, of which 18% (nearly 35,000km) are federal roads, 15% (17,000km) are state roads, and 67% (150,000km) local government roads. Despite the fact that the federal road network accounts for only 18% of the total system, it supports nearly 70% of the passenger and freight movement in the country. According to the most recently available data, around 40% of the federal roadway system is in poor condition, a classification that designates it as being in need of repair, while 30% is in fair condition and 27% is in good condition. The condition of state and local roads is even worse, with 78% of all state roads and 87% of local government roads designated as poor. According to the latest available statistics from the National Bureau of Statistics, 5,011,290 vehicles were registered between 2013 and 2015 and the state of Lagos had the most registrations while the state of Kebbi had the least.

The Federal Ministry of Works currently has 194 projects aimed at rehabilitating, expanding, or otherwise improving the roadways system that are in various stages of completion. The total outlays for these projects approach USD9 billion, and the Public Private Partnership Department is in the process of developing plans for enticing private firms and foreign investment. According to The Guardian, Nigerian politicians have announced their intention of releasing an additional NGN20 billion to each of Nigeria’s 36 states for the sole purpose of developing infrastructure.

Private-sector firms and the government are hoping that the investments in roadways will, among other things, allow the logistics sector to reach its full potential. Infrastructure weakness and onerous customs regulations have slowed growth in this sector, but revitalized transport channels will drive growth moving forward. Regional and transnational corridors, like the Trans-Sahara Highway linking Nigeria to Algeria and the Lagos-Mombasa Highway, are literal avenues of growth, and, as Nigeria continues to expand and improve domestic lines, they will become more and more important.

Like Nigeria’s road networks, its rail lines have historically been underdeveloped and underutilized, but sizable long-term investment by the government promises to change that. Currently, Nigeria boasts eight lines stretching across 3,500km, and the government is nearing completion on a plan that would direct a four-year, USD20 billion expansion and rehabilitation of its central rail lines—and it plans to invest even more in the coming years. The plan calls for laying 2,650km of new tracks, and the government hopes the project will further the region’s goal of interconnecting its transportation lines. In an exclusive interview with TBY, Rt. Hon. Chibuike Rotimi Amaechi, Minister of Transportation, explained the potential he sees in international rail networks. “We are developing this integrated system because the amount of cargo and services that can be transported within the region is huge,” said Minister Amaechi. “It is an ECOWAS-driven project and will facilitate greater trade and development of solid minerals, finished goods, agriculture, and so on, boosting the economic development of the region.”

As traffic volumes increase domestically and regionally, costs are expected to decline, further incentivizing rail shipments. These economies of scale could be particularly lucrative for the country’s agricultural industry, which has been hampered by prohibitively expensive transportation costs. In what observers hope is a sign of times to come, the Nigerian Railway Corporation recently began transporting cattle from the north to Lagos after a 20-year hiatus. In an interview with TBY, Eric Opah, Managing Director & CEO of Fortune Global, an international logistics firm, discussed what needs to be done to ensure new railways can best support the logistics sector, noting “the government needs to bring stakeholders together to properly plan where the inland container terminals and logistics support bases will be.” Opah was also keen to point out that industry-wide regulations needed to be streamlined and standardized.

Additionally, the government is keen to support public-private partnerships in every possible arena, and in June of 2016 the Minister of Transport announced a USD2 billion investment from GE. The investment will be focused on bringing the Lagos-Kano and Port Harcourt-Maiduguri routes back online. A similarly priced project, christened AfricaRail, is intended to refit regional lines with larger gauge rail and develop nearly 2,000km of new rail systems, eventually connecting Cote d’Ivoire, Burkina Faso, Niger, Benin, Togo, and Nigeria.

Improvements to domestic lines include plans for a high-speed line between Abuja and Kaduna. The upgraded line is part of a joint Chinese-Nigerian venture that aims to make passenger rail lines more viable for everyday commuters while simultaneously stimulating freight volumes.

Nigeria’s air transport sector is the second largest in all of sub-Saharan Africa, and Lagos is trying to establish itself as a regional air transport hub. Thanks to a spike in domestic air travel, the aviation sector in Nigeria has seen impressive growth in recent years, and the country now boasts 23 airports. Of those 23, five are international airports, which are located in Abuja, Lagos, Kano, Port Harcourt, and Enuga. Though many Nigerian airports require upgrades to their terminal buildings, control towers, and core infrastructure, according to the National Planning Commission, there is hope that private-sector investment can be utilized once the government removes various levels of red tape.

There are also plans to create a national carrier to strengthen competition in the industry, but no explicit guidelines have been established and no exact plan has been laid out. In a recent interview with TBY, Senator Hadi Sirika, Minister of State for Aviation, explained where the project currently is. “The timeframe is uncertain because it is dependent on a number of factors,” said Senator Sirika. “This includes how quickly we are able to form partnerships and agree on the terms and conditions for potential investors. The ambition is to create an airline through private participation in Nigeria that is able to take advantage of the vacuum that exists due to the absence of a national carrier.” The development of a national carrier is seen as a particularly vital addition after the American carrier United Airlines and the Spanish carrier Iberia pulled out of the country.
According to The Guardian, the commercial aviation industry accounted for roughly USD700 million of Nigeria’s GDP in 2015. Additionally, the nation’s various aviation investment projects in the near term approach USD12 billion in value, and industry leaders expect passenger volumes to approach 25 million by 2018, a figure that represents robust growth from 21 million in 2014. Across Africa, commercial air transport is expected to support 10.5 million jobs and contribute USD168.7 billion to various GDPs by 2032. Nigeria hopes to leverage its position as the continent’s second-largest economy to boost its aviation industry and claim its share of the space’s projected growth—the sky truly is the limit.

As the key logistical outlet for Nigeria’s oil and gas industry, the port and shipping infrastructure has seen sizable improvement in the last decade and a half. With the beginning of private-sector concessions for port operations management and construction, port infrastructure has attracted huge amounts of foreign capital. According to PricewaterhouseCoopers, semi-privatization of port infrastructure has led to a veritable renaissance in port construction and renovation projects while simultaneously curbing cargo theft, overstaffing, and price gouging.

The country’s most important commercial ports are Lagos Port, Tin Can Island Port, and Onne Port. According to the Nigerian Port Authority, in 2015 these three ports reported gross tonnages of 21,348,402; 16,258,937; and 26,572,758, respectively, and together these three ports accounted for nearly 45% of the 144,207,122 tons that called at Nigerian ports. A total of 5,090 ocean-going ships visited Nigerian ports in 2015, and the total cargo throughput for the same period was 195,969,200 tons, 60% of which was crude oil. The average turnaround time for vessels in Nigerian ports was 4.9 days and the average berth occupancy rate was 43%. Dry bulk cargo, liquefied natural gas, refined petroleum, and crude oil accounted for the bulk of the shipments handled, clocking in at nearly 9.4 million metric tons (mt), 22.4 million mt, 20.6 million mt, and 117.6 million mt, respectively. Gross registered tonnage was down in 2016, and in the first three quarters Nigerian ports registered a little over 100 million mt and handled 3,347 ocean-going vessels.

Nigeria has embarked on an impressive inland waterways infrastructure building policy that has brought a number of trade-friendly developments to the nation. The various programs undertaken include a dredging operation that stretches for 532km along the lower reaches of the Niger River; construction of six river ports in Baro, Lokoja, Makurdi, Owerrita, Degema, and Oguta; reforming the National Inland Waterways Authority; and initiating a scheme for maintaining all navigable waterways. By opening its inland waterways, Nigeria hopes to drive growth across its logistic and transportation sectors, providing the country with an economical means of transporting bulk goods.

As Nigeria looks to the future, it needs to ensure that its transportation sector is in working order. Growth in all areas will necessitate a robust network of transportation options, and the country is already headed in the right direction.