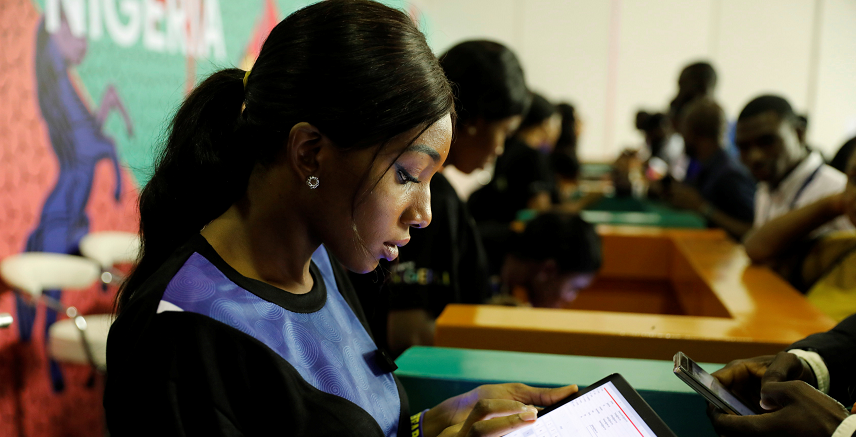 Share on:
Africa’s biggest economy has fully embraced internet-based communication and social media, which is quickly transforming the country’s media and entertainment industry

Youths are seen browsing the internet inside the venue of the launch of Google free wifi project in Lagos, Nigeria July 26, 2018.REUTERS/Akintunde Akinleye

For anyone that has recently watched a video ad for Nigeria’s biggest mobile telecom operator Glo, the underlying message that the company has chosen to convey must be easy to remember: “unlimited data” gives you access to information and allows you to communicate.

This is a powerful message and one that reverberates deeply with a new generation of Nigerians that have grown up more with YouTube than with television.

The concept is true for nearly any industry.

Today in Nigeria, mobile banking through messaging apps like WhatsApp or Facebook Messenger are widely used. Commerce, transport, security, governance, industrial development, and education are all being quickly transformed by the advent of digital platforms.

The media, and for those, understanding the digital revolution is more important than ever.

Take journalism for instance. Across Nigeria and many of its neighbors, news spreads quicker and with bigger impact today through WhatsApp groups than through news broadcasts.

This has facilitated and accelerated the impact of fake news and has given rise to quite a few episodes of social unrest across the continent.

This is a reality that news broadcast companies cannot ignore and that they must incorporate into the reality of their work and business models.

Even with only around 30% of Nigerians connected to broadband internet, the impact of these transformations is already clearly visible.

Particularly now, in light of the upcoming February 16 general election in Nigeria, the power and influence of the digital world, particularly through social media platforms, is undeniable. With the numerous scandals emerging from Facebook, with its Cambridge Analytica debacle and the accusations of abuse by Russian agents to meddle in the US elections, suspicion is on a high.

According to GlobalStat, over 83% of Nigerians has an active Facebook account today, by far the most popular social network in the country.

It is within that framework that Facebook decided this week it would not be accepting any political publicity from outside Nigeria on its platform, in a bid to limit the actions of foreign agents wanting to try to influence the outcome of the election.

WhatsApp, which is owned by Facebook, has put a limit on message forwarding to maximum five recipients, in an effort to curb the spread of fake news and misinformation. The necessity of such moves reveals just how outstandingly influential these platforms have become and how they have attained the power to subvert the democratic process.

This week, a meeting of managers, editor-in-chiefs, former editors, and other stakeholders took place at the Nigerian Institute of Journalism (NIJ) to celebrate the 60th birthday of Mr. Gbemiga Ogunleye, a celebrated journalist, lawyer and provost of the NIJ.

The attendees took the opportunity to discuss what challenges lie ahead for the future of media in Nigeria in the face of the digital revolution.

The conclusion, media outlets must take on the offence and put together sustainable business models that deal little with printing machines and more with new ways of information distribution and digital monetization.

The Nigerian digital economy is expected to be worth USD88 billion by 2021 and the media must be part of it.

The same seems to be true for the entertainment industry and one of Nigeria’s most recognizable exports after oil, Nollywood films.

In 2015, for the first time, Nigerians consumed more video content on their mobiles than on television. The gap has continued to widen ever since, as entertainment producers adapt to this new reality.

US film and TV streaming giant Netflix has made good on its promise to cater for African audiences recently.

As of January 2018, the platform offers 26 different Nollywood titles, and with the acquisition of the rights to Genevieve Nnaji’s film “Lionheart” in September, it had its first original Nigerian film debuting on the platform before it hit cinemas.

The trend is expected to continue in the months to come.

These transformations have made media and entertainment players in Nigeria and the wider continent consider their place in the digital revolution and whether they will profit from the transformations already taking place or stick to the old ways and slowly disappear.