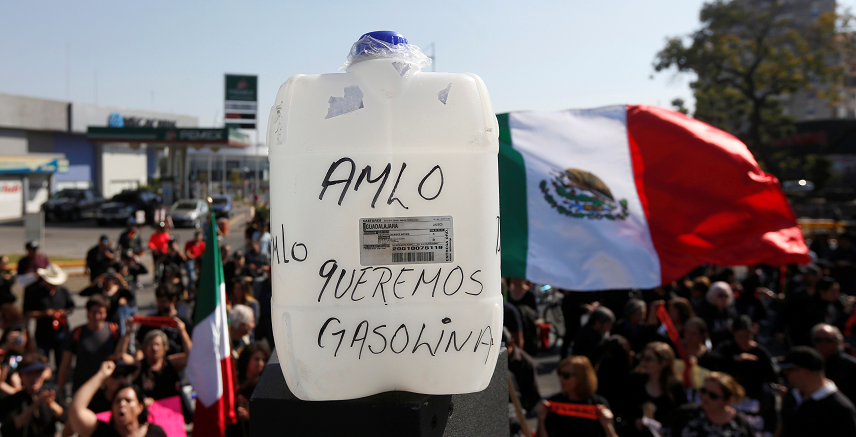 Share on:
Will Mexico achieve economic recovery with the new USMCA agreement, or will the Pemex conundrum continue to weigh the economy down?

People take part in a protest against fuel shortages near a gas station in Guadalajara, Jalisco, Mexico, January 13, 2019. REUTERS/Fernando Carranza

The signing of the USMCA by the US, Mexico, and Canada, raises more questions than answers for the Mexican economy in 2020.

With the US deep into election year 2020, and Canada fresh from its own federal elections in 2019, Mexico is the only member of this new partnership in the middle of an administrative tenure.

The macro expectations of the Mexican economy are flat, with Citibanamex, one of the largest financial groups in Mexico, forecasting GDP growth of 1% in 2020, below the previous forecast of 1.2-1.5%.

The financial solvency of Pemex, Petróleos Mexicanos, is critical to the outlook of the Mexican economy in 2020. In the past year, several international ratings agencies, including Moody’s and Fitch, have downgraded the credit ratings of Pemex and its emissions debt.

The financial solvency and rating of Pemex is directly intertwined with that of Mexican sovereign debt ever since the AMLO administration decided to take on some of that risk by injecting USD9.5 billion into Pemex via capital injections, tax subsidies, and other financial packages.

In June 2019, Fitch ratings downgraded Mexico’s credit rating from BBB to BBB+, and labeled all of Pemex’s USD80 billion in bonds to junk status. Moody’s maintains a negative outlook for Mexico’s sovereign debt with new ratings set to be released in 2Q2020. Mexico now faces an unprecedented situation where institutional investors could be forced to sell Pemex bonds if a second ratings agency classifies the debt to junk status.

Moving forward, with the oil market being impacted by the Coronavirus scare, as well as Mexican oil production guidance being cautious and suspicious, 2020 will be a critical year for Pemex. The production forecast is expected to gravitate around 1.7 million bopd, which is below the annual goal of 2 million bopd, but the company remains confident their exploration investments will yield new opportunities.

One of the most anticipated initiatives from the AMLO administration is the execution of its Infrastructure Development Plan, titled PNI 2020-2024. The plan is anticipating a financial package of MXN284 billion to be invested in 147 transportation, tourism, and telecommunications projects, of which approximately MXN44 billion is expected to be contributed and managed by the private sector.

This plan is in accordance with AMLO’s commitment to invest approximately 4-5% of GDP per year in infrastructure until 2024.

In 2020, 70 of these predetermined projects are scheduled to progress or begin, and the financial sector looks to benefit with increased commercial loan activity.

USMCA has also reinvigorated the economy in 2020, with optimistic expectations being renewed by their relationship with the US and its status as Mexico’s largest export partner. Exports still represent 20% of Mexico’s GDP, with 80% going to the US.

The business community will benefit in 2020 from a decrease in currency-exchange and market volatility.

In the trade standoff and NAFTA-USMCA trade negotiations, the Peso fluctuated between MXN17.17/USD1 and MXN22/USD1 between 2016 and 2019, which represents a total volatility of 21.8 percent.

Moving forward, the expectation is that the currency stabilize around MXN19—MXN19.5, which will benefit the business sector and give investors one less variable to worry about in their budgeting and forecasting due diligence.

Finally, it is expected that Mexico’s central bank, Banxico, will continue relaxing its monetary posture by lowering interest rates.

In December 2019 Mexico still had among the highest interest rates among the region’s major economies with 7.25%, compared to Brazil (4.5%), Colombia (4.25%), and Chile (1.25%), giving the central bank room to maneuver accordingly.

Remittances also remain an important component of the Mexican economy, representing 2.7% of GDP in 2019 with USD35 billion. In 2020 this amount is expected to grow by 5% to USD37.2 billion, with a ratio of 97% being sources from the US.