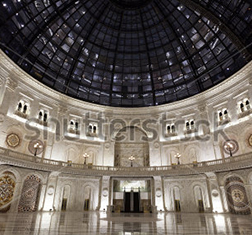 Share on:
With the explosion of wealth throughout the GCC and especially in Qatar, the country has seen the development of many shopping complexes and entertainment facilities aimed at capturing this market […]

With the explosion of wealth throughout the GCC and especially in Qatar, the country has seen the development of many shopping complexes and entertainment facilities aimed at capturing this market potential. Qataris in particular are well recognized as having a particularly sophisticated taste for fashion and luxury goods. Considering their taste and desire for the most upmarket and premium luxury clothing and fashion products, Qataris have traditionally had to fly to Italy, Paris, or London to attain such merchandise. However, investors have looked at the characteristics of the local market here in Qatar and have begun developing niche ultra-luxury fashion malls to cater for these customers.

Al Hazm Mall is an $820 million destination being developed by Al Emadi Enterprises, scheduled for a soft opening by the end of 1Q2016. Its new, Italian-inspired luxury shopping center caters for the region’s ultra wealthy and differs greatly from other shopping centers being opened in the country. Al Hazm is particularly aimed at capturing the market segment that traditionally travels to Europe to buy high-end fashion products. As such, the mall is not designed to duplicate a typical shopping experience that a consumer would find in malls such as Dubai Mall or the upcoming Mall of Qatar.

Al Hazm is designed to reinvigorate the shopping experience and model ultra luxury from the moment a customer walks through the door until the moment they exit. First and foremost, Al Emadi Enterprises contracted more than 15 architects to design the building to resemble Italy’s Galleria Vittorio Emanuel II, one of the world’s oldest shopping malls, which is housed in a 19th century double arcade in Milan. The 105,159sqm building is perched atop a hill on Al Markhiya Street with vantage points overlooking Doha’s downtown West Bay area. To build the structure, Al Emadi Enterprises imported stones from Jerusalem, Carra, and Tuscany, which were then treated by 250 Indian carvers. The interior of the mall will feature carved marble arches, pillars, and special slabs of marble similar to the ones in Mecca, which will aim to keep floor temperatures at a comfortable 20 degrees throughout the entire summer period.

The shopping experience begins with visitors entering through a small glass pyramid on one end of the building that will double as an entrance to both the VVIP visitor’s entrance to the galleria as well as the entrance to a special 3,000sqm underground auction and gallery space. Above the VVIP area is a VIP floor where personal shoppers will assist visitors to locate particular fashion goods while also providing advice and information on the product’s origin and design characteristics. It is currently unknown which retailers will be featured within the galleria; however, it has been assured by Al Emadi Enterprises that these shops will be the first of their kind in Qatar and are guaranteed to attract the top-echelon of fashion connoisseurs.

In efforts to ensure a well-rounded experience for shoppers, Al Hazm will also offer a uniquely designed gourmet food selection. Al Hazm will host a fresh market with organic produce imported from across the world with foods not native to Doha, and delicacies that cannot be found in neighboring supermarkets or even boutique offerings. Moreover, the shopping center will exude the Italian feel through its doubling as an art gallery. In doing so, authentic and replica sculptures and paintings will line the halls of the mall. With all of these facets put together, Al Hazm will set a new standard of luxury shopping unbeknownst to the Middle East that will certainly set the country apart as a top shopping destination.