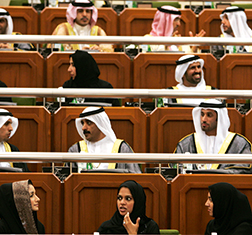 Little Sparta To the Rescue

Share on:
Dubbed by American Defense Secretary James “Mad Dog“ Mattis as “little Sparta,“ the UAE has had one of the most active, and by many accounts successful, foreign policies of any […]

Dubbed by American Defense Secretary James “Mad Dog“ Mattis as “little Sparta,“ the UAE has had one of the most active, and by many accounts successful, foreign policies of any country on the planet in the past decade. Measured by per-capita punch, it is certainly one of the most ambitious. In addition to its impressive 98 diplomatic missions across the world (or one for every 14,000 Emirati citizens), its military effervescence has been no less conspicuous.

Far from a passive, indifferent commercial outpost on the Arabian Gulf, the UAE now has military bases on the Horn of Africa, the southern rim of Arabia, the mouth of the Red Sea as far north as Eritrea, and deep into the Mediterranean, from Benghazi (Libya) to Limassol (Cyprus). At no time since pre-Napoleonic Venice has such a small but pivotal power held such influence.

For starters, the question and quest for Emirati influence is a bit of an anomalous one: the UAE is liberal and tolerant while retaining strong Islamic values—scarcely a comparison can be made in recent world history to its unique international position. Trapped between hyper-modernity and a hard place, the UAE cannot afford to let ideology get in the way of its policies. Hence its perusal of what one expert on the Gulf calls its “Jeffersonian“ foreign policy: the strict division of church and state in the pursuance of regional objectives.

This sets the country apart from its closest counterpart, Qatar, another petro-power that has taken up its own cross across the region, but with far more clearly defined goals: the rise to power of soft-Sunni political Islam. Contrary to Doha, which has often clashed with its neighbors over certain facets of its foreign policy, the Emirates’ objectives are not only more measured, but far more pragmatic.

The key to Abu Dhabi’s approach is two-fold: remain non-sectarian and un-ideological in scope and protect ports, sea lanes, open airspace, and maritime trade routes taking precedence over any and all doctrinal considerations.

The Carrot is In the Cake

Though host to some of the largest ports in the Middle East, including Abu Dhabi’s Khalifa Port, the UAE is not immune to competition. Significant expansion at neighboring ports in Chabahar (Iran) and Duqm (Oman), not to mention the construction of King Abdullah Economic City on the Red Sea in Jeddah (Saudi), means that virtually all of its neighbors are vying for a larger piece of the global trade pie. Inevitably, if not intentionally, variations in regional trade volumes are somewhat zero-sum, and the UAE’s aggressive foreign policy stems at least in part from these fears.

To contain these threats, Abu Dhabi has a pragmatic approach: internationally, it must manage, if not stabilize, regional security through military consolidation and nimble enough diplomacy to avoid ruffling the feathers of other powerful players in the region. If there’s a single political narrative to this strategy, it is the rollback of political Islam across the Gulf, Levant, and North Africa.

In pursuit of this, it has supported militarily efforts against Houthi rebels in Yemen, keeping the country’s significant ports open and friendly. Further south on the Horn of Africa, Abu Dhabi is backing rebels in Puntland and Somaliland in their efforts to break away from Mogadishu. In return—or as part and parcel of this process—the UAE is funding Puntland’s Maritime Police Force and bolstering its acquisition of the Berbera port along Somaliland’s coast as part of its securitization of the region’s most critical waterways.

An ancient Red Sea harbor that once marked the southernmost tip of the Ottoman Empire, Berbera is now under contract with DP World, a shipping behemoth that sprung out of the 2005 merger of Dubai Ports Authority and Dubai Ports International and now controls 77 terminals across the globe. And Berbera is far more than a military-map vanity project; plans are afoot to build a Kempinski hotel and solar power stations—all in addition to the 25-year lease on air and naval bases the deal included, which amounts to virtually the “first economic recognition of [the] tiny republic,“ as The Economist quoted one ecstatic Somaliland politician putting it.

Money Where Your Mouth Is

The mastermind behind the UAE’s foreign policy is Abu Dhabi and, more specifically, HH Sheikh Mohammed bin Zayed Al Nahyan, the Crown Prince of Abu Dhabi and Deputy Supreme Commander of the UAE Armed Forces. Son of the late founding father of the UAE, Sheikh Zayed bin Sultan Al Nahyan, His Highness graduated from Sandhurst before enrolling as an officer in the UAE’s armed forces, where he primarily served as an air force pilot. Since then, he has transformed the UAE into the third-largest arms importer in the world with an estimated military budget of USD23.5 billion in 2016.

Yemen, where its troops are most tied up, has so far been a rather mixed bag. On the one hand, the war that kicked off in early 2015 and since become known as one of the darker and less comprehensible horses of the contemporary world’s never-ending conflicts has met with complications. The capital of Sana’a, despite the continuous shelling the city has received, has yet to fall from Houthi control.

But this emboldened military presence has also reflected on domestic policy, with HH Sheikh Mohammed bin Zayed Al Nahyan taking the unprecedented step of introducing military conscription. For a supremely prosperous country, there is a longstanding fear amongst elders that young Emirati men have grown too cossetted to defend their country’s prosperity.

In this regard, the air, naval, and ground campaign in Yemen provides a perfect opportunity to right more than several wrongs: to make men of boys; create a greater bond of national solidarity across socio-economically disparate Emirates; increase reverence and respect for the state; gain vital military experience; and put society on an equal war-footing with regional friends, rivals, and possible future foes. After all, in a region experiencing tectonic shifts in its politico-military balance of powers—and possibly once-in-a-generation socio-ideological reconfigurations—it pays to stand ready.

But Abu Dhabi also stands tall in the world of ideas. As the UAE ambassador to the US, Yousef Al Otaiba, wrote in a recent piece, his country’s mission in the region and world at large is to be “a path guided by the true tenets of Islam: respect, inclusion, and peace.“ This is a vision that “empowers women, embraces diversity, encourages innovation, and welcomes global engagement,“ Otaiba wrote, and is already being put into place in the UAE, where Amal Al Qubaisi was recently made president of the country’s Federal National Council and is the first woman in region to lead a national council. In addition to the opening of the country’s largest Indian Orthodox Church and the restoration and reopening of St Andrews Cathedral, the government also donated land for the construction of the Emirates’ third Hindu temple in 2015.

Setting out to establish a strong, capable, and accountable post-carbon economy “driven by innovation, human capital, rule of law, and open trade,“ the country is also working in conjunction with NASA to develop the UAE Space Agency to the extent that it can put a probe around Mars by 2021. As part of the Emirate’s broader goal of demonstrating that it is possible to be “Muslim, moderate, and modern“ without batting an eye, the Mars probe is hoped to be a source of inspiration for an entire generation of Emirati and Arab youth—a Kennedian “moon shot“ for the 21st century Gulf.

Whether social, intellectual, or diplomatic, Abu Dhabi’s impact is also making itself felt on this planet. In addition to the much-publicized opening of satellite campuses of NYU, the Sorbonne, and INSEAD, not to mention branches of the Louvre and Guggenheim, Abu Dhabi recently launched the Arab Gulf States Institute in Washington, a well-respected think tank that is fast becoming the primary source of intelligence, analysis, scholarship, and commentary on the America-GCC relationship. On a more philosophical level, Abu Dhabi has also contributed greatly to various international deradicalization efforts, giving bedrock support to peace-building bodies such as the Global Counterterrorism Forum, supporting the Global Coalition to Counter ISIL, and hosting the Muslim Council of Elders and the Global Forum for Promoting Peace in Muslim Societies. In conjunction with the US, it also launched the Sawab Center, a global digital platform dedicated to countering violent, radical, and nihilist ideologies, beginning with but not restricted to Daesh.

Whatever the tensions in its immediate backyard, the UAE has been working tirelessly to ensure that major players such as Iran not only respect the norms that make international life agreeable, but become fruitful partners at the same table. This is why the UAE not only worked tirelessly to see the successful implementation of JCPOA, but has also stressed how the UAE’s own successful nuclear energy program, launched in 2009, might serve as a model for other carbon-dependent nations such as Iran going forward. In addition to promoting peaceful energy policies, Abu Dhabi remains as committed to the regional security paradigms that ensure that neither security, nor integration, nor mutually beneficial development are neglected. For this reason it joined the Istanbul Cooperation Initiative (ICI) launched during NATO’s Istanbul Summit in 2004 as part of that body’s strengthening of political, economic, and military ties with critical countries across the greater Middle East, of which the UAE is a crucial one. In addition to its active participation in ICI, the Emirate has also particularly strengthened its ties with France, the UK, and South Korea.