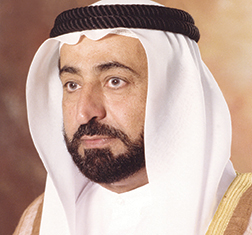 Share on:
HH Sheikh Dr. Sultan bin Muhammad Al Qasimi, Member of the Federal Supreme Council and Ruler of Sharjah, has been an inspiring leader of the Emirate since 1972, carefully watching over its development into the cultural capital of the Islamic world.

His Highness grew up with a deep-rooted love of his nation and its history. He has always maintained a special passion for education and knowledge, which has guided and characterized his leadership. HH Sheikh Dr. Sultan bin Muhammad Al Qasimi has been the Ruler of Sharjah since 1972. He is the 18th Ruler of the Emirate of Sharjah, following a long chain of Al Qasimi rulers since the year 1630. Under his leadership and guidance, Sharjah has become the internationally recognized heart and patron of Islamic culture. Throughout his leadership he has stood as an example, studying extensively and taking up numerous teaching roles at internationally recognized universities. His Highness is an established historian and a believer in the importance of education, and has published several theatrical and literary works as well as a plethora of works on the history of the Gulf.

His Highness is internationally recognized as the key patron and promoter of the region’s heritage, culture, arts, and knowledge. Largely because of his leadership, the Emirate of Sharjah is famous for the pride it takes in its rich Arab and Islamic heritage and civilizational legacy. In 1998, UNESCO declared Sharjah the cultural Capital of the Arab world, and in 2014 the Emirate was crowned the Islamic Culture Capital by the Islamic Educational, Scientific, and Cultural Organization (ISESCO).

His Highness completed his elementary and secondary education between Sharjah, Kuwait City, and Dubai, and went on to study a BSc in agricultural engineering at Cairo University, graduating in 1971. Soon after the birth of the United Arab Emirates on December 2, 1971, on December 9 the ministers’ council was formed and His Highness was named as the UAE Minister of Education.

He completed a PhD with distinction in history at Exeter University in 1985, and another in the political geography of the Gulf at Durham University in 1999. He has been the Minister of Education for the Emirates since 1971, the year before he became ruler of Sharjah, and has held the position ever since. He also holds several educational posts, as both president of America University of Sharjah and the University of Sharjah. He was named visiting professor at Exeter University in 1989 and became a Professor of Modern History of the Gulf at the University of Sharjah in 1999. In 2008, he also became a Visiting Professor at Cairo University.
It is unsurprising, therefore, that he is known throughout the region as a firm believer in the importance of arts and culture, and the role they play in unifying the Emirate. He was the initiator of the Sharjah Cultural Festivals, which celebrate Arab and Islamic arts and culture, and tour cities around the world.

He has served as honorary president of various organizations and associations including the Union of Arab Universities; the Arab Theater Institute; the Society of Arab Astronomy and Space Sciences; the Islamic International Organization for the History of Sciences; the Egyptian Association for the Study of History; the Council of World University Service (WUS); the Sharjah City for Humanitarian Services; as well as Honorary Member of the Centre of Middle East and Islamic Studies at the University of Durham, and the Union of Writers of Egypt.

His Highness has authored a number of important scholarly texts as well as plays, which have been translated into English, German, French, Spanish, Russian, Urdu, and Persian, among other languages. Some of these include Muscat and other Forts on the Shoreline of the Gulf of Oman; Sharjah Air Station between the East and West; The Genesis of the Scout Movement in Sharjah; Deep-Seated Malice; A Memorandum for Historians on the innocence of Ibn Majid; Power Struggles and Trade in the Gulf (1620-1820); The Gulf in Historic Maps (1478- 1861); The Rebel Prince; The Gulf in Historic Maps (1493-1931); The White Sheikh; The Journals of David Seton in the Gulf, 1800-1809; John Malcolm and the British Commercial Base in the Gulf 1800; British Occupation of Aden; Division of the Omani Empire (1856-1862); The Myth of Arab Piracy in the Gulf; Samson; Nimrod; Alexander the Great; The Reality, Identical Copy of the Original; The Case; and The Return of Holako; among many others.

His senior wife was Sheikha Moza bint Salim bin Mohammed bin Manee Al Falasi, with whom he has two children; his son Sheikh Mohammed (May God Rest his Soul), who passed away at a young age, and his daughter Sheikha Azza. His Highness also married Her Highness Sheikha Jawaher bint Sheikh Mohammed bin Sultan bin Saqr Al Qasimi, with whom he has three daughters and one son; Sheikha Bodour, Sheikha Noor, Sheikha Hoor, and Sheikh Khalid.