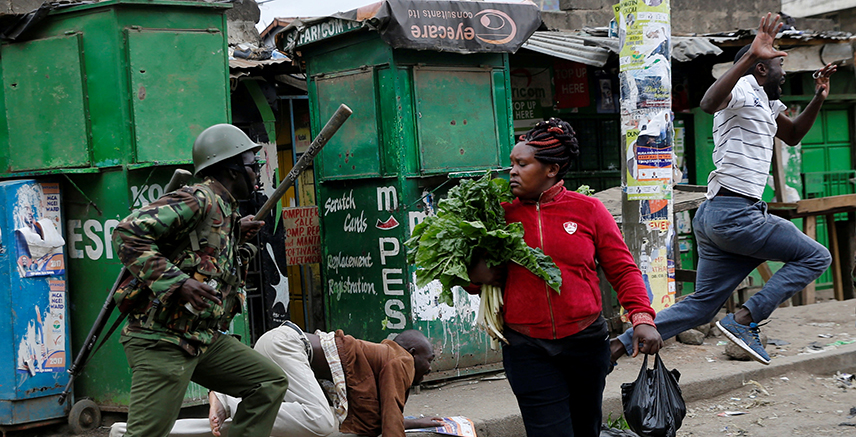 Share on:
As voters go to the polls in one of the most contested elections in Kenyan history, much more than half-century old personal rivalries is at stake.

An anti riot policeman attempts to disperse people from the street as a woman carrying vegetables walks past in Mathare, in Nairobi, Kenya August 9, 2017

Since democracy was first (re)introduced to Kenya in 1992, its population has more than doubled from to 47 million, the percentage of urban-dwellers rising from 17% to 26%.

Yet despite these considerable demographic transformations, many of the issues facing voters remain the same: widespread corruption; the tenacious pull of tribal allegiances at the ballot box; and the stubborn persistence of economic disparities stemming from the colonial era and subsequent underdevelopment.

Now in August 2017, voters in Kenya are going to the polls to decide whether to reelect the incumbent Uhuru Kenyetta, in power since 2013 and leader of the Jubilee coalition, or to give the mandate to perennial challenger Raila Odinga, leader of the Nation Super Alliance (NASA), a loose opposition coalition of 11 parties formed in January 2011.

But with widespread fears of a repeat of the ethnic violence that rocked the country from 2007-08, ending only with the intervention of former UN Secretary-General Kofi Annan, the stakes have arguably never been higher.

Both candidates are keenly aware of this. As scions of the country’s two most important postcolonial dynasties—who’ve been duking it out for over 60 years—they ought to.

For Kenyatta (b.1961), son of the country’s first postcolonial president Jomo Kenyatta (in power from 1964-1978), the election is critical not only to his political career, but also to his personal freedom.

He is one of the only sitting presidents in history to be charged by the International Criminal Court for crimes against humanity for allegedly masterminding the violence that led to 1,300 deaths and the displacement of 600,000 in 2007-08.

But he was nimble enough to brand the ICC’s investigation as “imperial” meddling in Kenya’s affairs.

In doing this, he was fortunate enough to garner the opposition’s acquiescence to put up a united front against The Hague’s interference, in what many Kenyans agreed was, however bloody, a purely domestic dispute.

Nonetheless, as one of the wealthiest men in the country, the Amherst College-graduate can still fall back on his family’s 500,000 acres, fruit of their support for the British during the Mao Mao rebellion in the 1950s and of moves to dispossess white colonial farmers of land after independence in 1964.

Located in the fertile Rift Valley region, it is one of many coffee, tea, and tobacco plantations that had been taken from people of the Kalenjin tribe during the colonial period, only to be snatched up by the Kikuyus after independence.

The Kalenjin people still refer to this area as their ‘ancestral lands.’ But both Kenya’s founding president and the sitting president are Kikuyus that have benefited from the displacement of the Kalenjins.

A thorn in the East African republic’s side since its inception, this was a leading cause of election-related violence in the Rift Valley in 2007-08—and is threatening to undermine the president’s very precarious coalition of Kikuyus and Kalenjins, two of the country’s three largest ethnic groups.

All that glitters ain’t gutter

Kenyatta’s reign has not been entirely without benefit. Despite the charges against him for crimes against humanity, his presidency saw Kenya receive not only former US president Obama, to whom the opposition candidate claims to be related, and Pope Francis.

He also negotiated the future construction of a Chinese-funded USD4 billion-railway project, the country’s largest in half a century, which will connect the capital of Nairobi to the Indian Ocean port of Mombasa, in the hope of competing with Tanzania.

Yet apart from his strong support of the Kikuyu, the backing of other major ethnic groups is far from unconditional, and said to be slipping. No less prone to fiscal improprieties than the next president, his four years in office also saw a doubling of the national deficit.

If at third you don’t succeed…

Under the country’s current constitution—which he himself amended on multiple occasions—the 69-year old loser of three previous presidential elections (1997, 2007, 2013) will be too old to run again in 2022.

Though he did serve as Prime Minister from 2008-2013—a position invented to assuage him and his supporters following the questionable outcome of the 2007 elections—Odinga’s chances of becoming president are limited.

Should he fail on Tuesday, the East German-educated, born-again Christian who spent over six years in prison for his involvement in a failed 1982 coup attempt against the authoritarian president Daniel arap Moi, Odinga would only be the second figure in modern history to lose a fourth presidential election.

But the conclusion is far from bygone. Though Kenyatta enjoys widespread support from the Kikuyu, his grip on much of the Rift Valley region is slipping.

And in the western and coastal regions, NASA enjoys widespread support. Much of this rests on the overwhelming backing of Kenya’s fourth-largest tribe, the Luo, of which Odinga is a member, as well as on the support of leading Luhya politicians such as Mudavadi and Wetangula, who represent the country’s second-largest tribe (Luhya).

Though the latter is notoriously difficult to unify as a voting bloc, this still doesn’t bode well for incumbent president Kenyatta; NASA also enjoys the backing of the governors of Nairobi and Mombasa, Kenya’s two largest cities.

Odinga’s erroneous claims to be related to Obama and his comment that homosexuals in Kenya “should all be arrested” did little to endear him to the wider world.

But the international community has even less time for President Kenyatta after his alleged roll in what happened in 2007-08.

The UK and US in particular have made this clear, suggesting that there will be consequences for the nation if Kenyatta is reelected.

But the wild card in this year’s election could be the recent devolvement of power of the executive and legislative branches from a federal level to regional governors.

Under the 2010 revision, 47 new counties were established, and 34% of the national budget has now been allocated to newly created local governments. The gubernatorial contests to control these spoils are now seen as the most important issue by many voters (and politicians).

What’s more, if neither Kenyatta nor Odinga takes more than 50% in the first round of voting on Tuesday, the country will proceed to a second. It is here the devolved political system will exercise its full powers, as regional governors will be heavily solicited—and politicized—to throw their weight behind one of the two.

In this election, says Hassan Mohamed, the head of Kenya’s National Cohesion and Integration Commission (NCIC), clashes are most likely to break out over gubernatorial elections.

The nature of the violence, Mohamed predicts, will be different this time around. Rather than ethnic, it will be political.