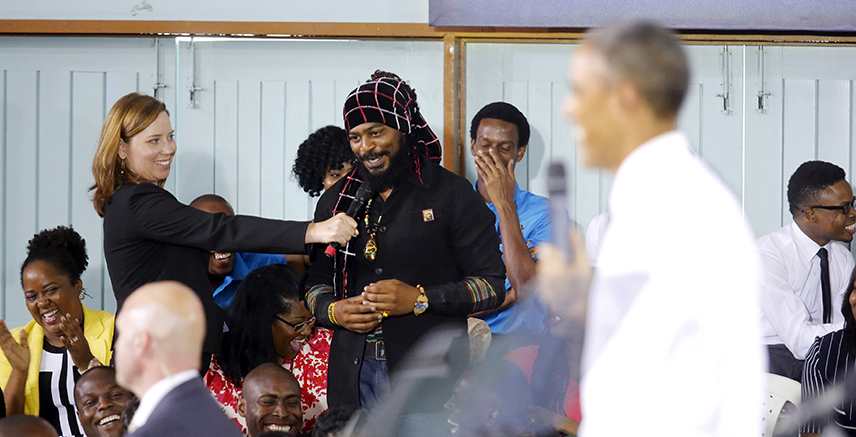 Share on:
Thanks to a recent change in legislation, the Jamaican medical cannabis industry is developing rapidly and poised for growth.

A man asks a question about the legalization of marijuana as U.S. President Barack Obama (R) holds a town hall meeting with young Caribbean leaders at the University of the West Indies in Kingston, Jamaica April 9, 2015.

Although Jamaica is strongly associated with “ganja,” the Hindi name commonly used to refer to cannabis, the consumption of the herb for recreational purposes is still forbidden.

Indentured servants brought to work in Jamaica under British rule first introduced cannabis to the island in the mid-19th century. However, the 1913 cannabis decree banned the cultivation, distribution, and consumption of marijuana, and the legislation remained unchanged after Jamaica’s independence in 1962.

Cannabis users, particularly the Rastafari who consider the plant to be a spiritual product, were subject to strong oppression from the government before their culture became widely popular in the world thanks to the reggae music and its most famous ambassador Bob Marley, an influential advocator of the drug.

The debate around marijuana decriminalization raged in Jamaica for decades with little progress for fear of violating international treaties and inviting sanctions from Washington.

New scientific developments and the evolution in legislation, however, particularly in the US, have finally fostered a change in the regulatory framework.

The Dangerous Drugs Amendment Act 2015 turned possession of less than two ounces of ganja into a minor offense.

More significantly from a business point of view, the new legislation establishes the Cannabis Licensing Authority (CLA) to oversee the implementation and regulation of licenses for the cultivation, processing, distribution, sale, and transportation of medical marijuana.

The CLA board includes representatives from the Rastafarian community and ganja growers’ association in an attempt to include the traditional Jamaican growers in the process and to bring their production toward legalization.

The Dangerous Drugs Amendment Act 2015 achieves balance between meeting Jamaica’s international obligation while setting the basis for the development of the medical marijuana industry.

As legislation has evolved, the global medical marijuana industry is experiencing an unprecedented boom.

Close to 30 states have already legalized medical marijuana in the US, according to a report by Arcview Market Research, a reference research firm for the cannabis industry.

The global market has grown 30% in 2016 to USD6.7 billion and could top USD20 billion by 2021. The development of the industry represents an important opportunity for Jamaica as the country benefits from a significant competitive advantage in this sector.

A decisive step in Jamaican research on cannabis products was reached in July 2017. Dr. Henry Lowe, a Jamaican pioneer in the development of ganja medical products announced that Cresorol, a drug developed to treat acute myeloid leukemia (AML), had been granted orphan-drug designation by the US Food and Drug Administration (FDA).

Dr. Lowe claims it holds the potential to earn Jamaica more than USD250 million within three years in the US market alone.

In October 2017, around 270 license applications were in progress at the CLA, and the first two licenses were issued on October 18.

Everything Oily Labs was presented with a processing license and will focus on the processing of cannabis into oils for the medical and therapeutic industries. Epican also received a license for cultivation and will operate a 4273sqm growing facility before expanding into processing retail, research, and development once their other licenses are approved.

The system works in a closed loop, which means that each licensee must conduct transactions with other license holders. Therefore, the signing of a tripartite agreement, with Everything Oily buying the cannabis itself from Epican through the CLA, was a prerequisite to the issuing of the licenses.

Other issued licenses should soon join the circle and create a sustainable ecosystem. Jamaica’s commitment to slowly and steadily developing its marijuana industry within legislative evolution could prove to be huge success for the health sector and for the health of the economy.