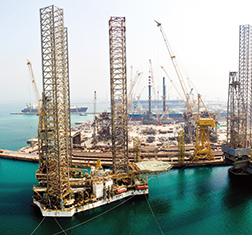 Share on:
While few doubt Qatar's ability to weather a protracted energy crisis, doing so is costly, making diversification more than just a buzzword.

As is the case with many of its regional counterparts, creating an accurate medium-term outlook for Qatar is challenging under the current economic circumstances—low oil prices. By mid-2015, the Ministry of Development Planning and Statistics had already cut GDP growth from 7.7% to 7.3%, as the outlook for oil grew increasingly murky. Nonetheless, Qatar is a bastion of stability, in tumultuous times.

Despite some abstract discourse back in 2013 about adjusting the riyal’s peg, possibly in favor of a basket, few observers expect any change in the medium term, and the central bank insists that no changers are in the works. Currency forwards have failed to price in meaningful changes in the one-year spot rate, indicating market confidence in the country’s commitment to the peg. What Qatar loses in monetary policy autonomy—and importing US inflation—it gains in investment confidence. Investors can reliably predict the value of their returns in local currency in a way that they could not in, say, Nigeria.

Qatar finds itself in an especially strong position to defend its monetary policies, thanks to extensive reserves—enough to cover the monetary base and current account payments over the next four years—however investors have less confidence in nearby Saudi Arabia. A revaluation there could shift the regional dynamic and force the hands of its neighbors. Qatar, is expected to run a current account deficit of 1.2% of GDP in 2016, with a surplus of 0.8% expected in 2017 according to S&P. The credit rating agency also reported that, as of January 2016, the country had around 30 months coverage of current account payments for 2016-19 as well as an estimated 125% coverage of the monetary base.

In general terms, The GDP breakdown assigns 50.5% to oil and gas related economic activity, dwarfing finance, insurance, real estate, and business service which collectively account for another 14.2%. Other important sectors are manufacturing at 10%, with trade, restaurants, and hotels making up another 6.8%.
A recent note published by Bank of America Merrill Lynch puts the oil and gas producing country’s plight in broader perspective; the sustained price plunge will, “push back $3 trillion a year from oil producers to global consumers, setting the stage for one of the largest transfers of wealth in human history.” Qatar’s rush to diversify represents an effort to align itself with global consumers. If the country can host both sides of the economic spectrum, it could capitalize on readily available, cheap energy.

Against this background, job losses in the hydrocarbons-related industries are having ripple effects throughout the economy, as unrelated sectors struggle to offset slowing growth. State-run RasGas started announcing layoffs in late 2015, as did other energy-related firms such as Maersk Oil, which cut about 12% of its workforce around the same time, and Sidra, which implemented a “rightsizing” plan that eliminated 200 jobs.
Falling oil revenues are also changing the labor dynamic of its capital-intensive economy. The greater Middle East employs around 29 million immigrant workers, who in turn generate a collective $98 billion in remittances as of 2014. And while Bloomberg notes that remittances are up, this isn’t necessarily good news for Qatar, for two reasons. First, migrant workers are taking advantage of an artificially favorable exchange rate. With the riyal pegged to the US dollar, it is among the world’s most overvalued currencies on an inflation-adjusted basis, especially in the context of severely depreciated currencies of migrant-sending countries. This translates into more expensive imports and a proportionally higher exit of capital, even at the same wages. In addition, this confluence of factors also means lowered domestic spending my expatriate workers. And with Qatar’s famously liberal capital regulations, current conditions are costly.

Many positions in the local economy are held by expatriate workers, forcing some to peruse opportunities abroad—or back home. For the first time in 1Q2016, residential rates are actually falling as landlords struggle to fill apartments vacated by laid-off expatriates. Markets abroad are already pricing in future downsizing for expat labor. Shares for Robinson Land—a leading Philippine real estate company that sells about 20-25% of its homes to Filipinos overseas—lost a fifth of their value between October 2015 and early February 2016. So while the economy’s fundamentals are sound enough that analysts remain largely bullish, empty apartments and slow job growth are evidence that even Qatar is not impervious to the economic malaise gripping the global economy.

The mirage of good news started shimmering on the horizon in early 2016 when oil prices registered their first—temporary and speculator-driven—rally in over a year as investors piled in at the first sight of a turnaround. While the trend was short lived, it was enough to trigger optimism on Qatar’s stock exchange, temporarily ameliorating what Zero Hedge called the “Middle East Bloodbath” in the opening weeks of 2016 and a good part of the preceding FY. As trading opened on January 23 2016, the exchange rose 5.2% in the first 10 minutes of trading with the majority of shares surging over 5.0%. While shares stabilized over the ensuing days and weeks, this even showed that the markets were eager to embrace positive signals, and that global markets were especially eager for good news out of Qatar.
Days later on January 25, Moody’s affirmed Qatar National Bank’s (QNB’s) Aa3 deposit ratings with a stable outlook. A senior-level analyst from the organization explained that even with low oil prices, GDP growth in Qatar would remain relatively strong over the next two years thanks to the government’s massive monetary reserves and assets, which he argued would sustain public investment. With investment guaranteed, non-hydrocarbon growth stands to benefit for years to come.

Of course no review of Qatar can overlook the country’s ambitious 2022 FIFA World Cup hosting, which involves massive spending on physical infrastructure in the realm of $200 billion between 2014 and 2022, with projects directly related to the event accounting for around 10% of this hefty check. More importantly, according to Standard Chartered Bank, the population could reach 2.8 million in the next two years, representing a 75% population increase in less than a decade. For those with the long-term outlook, this demographic boom allows them to count on long-term growth in demand in pretty much every sector.
Qatar is doubling down on its efforts to diversify its economy, with His Highness Sheikh Tamim Bin Hamad Al Thani leading the charge. The Emir started out the year by reshuffling his cabinet in a move that analysts predicted would facilitate political and policy progress. The new appointees represent a generation that values a socially and economically open society. Speaking to the new cabinet, he called for simplifying regulations and establishing a single-window system of licensing to speed up foreign and local investment.

The always reliable Ministry of Development Planning and Statistics (MDP&S) adds context to these developments with their Qatar Economic Outlook 2015—2017 Update, issued in late 2015. The publication predicts stable growth in the non-oil and gas sector, and their double-digit growth prediction for in 2015 is shaping up. However 2016, and moving into 2017, the organization sees investment and construction activity starting to plateau, and as population growth eventually slows.

According to the MDP&S, 2015 saw the non-oil and gas sector post impressive growth in 2015, thanks to construction, which expand by approximately 13% in 2015 on the back of World Cup and infrastructure spending. Service also rose by 9.8%, buoyed by population growth. With millions of guests on the horizon, this is great news for the service sector.

Take tourism for example, where visitor arrivals hit 841,025 in 1Q2015 alone, and grew by nearly 11% YoY. Qatar’s airport can now accommodate 30 million passengers annually, up from 9 million, and this number will soon rise to 50 million, signaling where the country plans to go, and how it plans to get there.