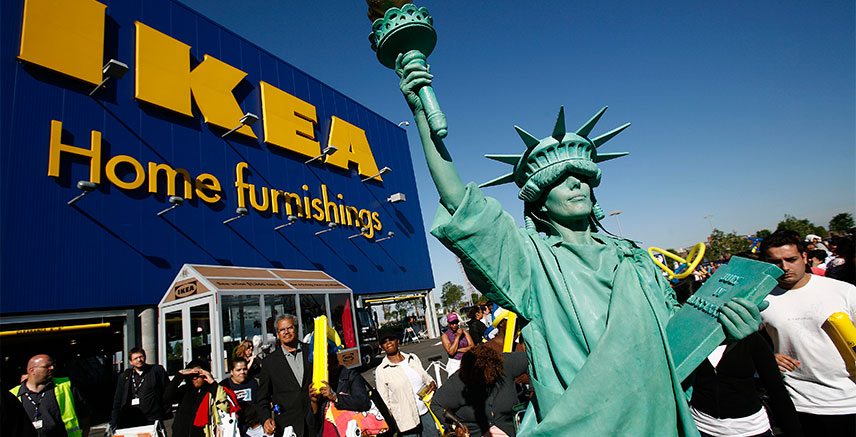 A Swedish Fish in every sea

Ikea opens its doors in Belgrade

Share on:
The opening of the first Ikea in Belgrade since the collapse of the former Yugoslavia has led to a flurry of debate over the nature and destiny of Serbian society.

The first Ikea in Belgrade opened in 1991 when the city was still the capital of Yugoslavia, a vast multiethnic state of some 23 million souls.

But, like Yugoslavia, quirky affordable Scandinavian furniture for the Balkans was not to be. The Federal Socialist Republic’s collapse a year later was accompanied by the Swedish furniture magnate’s swift departure.

Now 26 years later, Ikea is back with a vengeance.

In a reversal of the long-term flow of people, goods, and capital that usually sends Balkan people north to Scandinavia in search of employment, asylum, or both (there are thought to be some 200,000 Swedes of Yugoslavian heritage, 2% of the country’s 9.9 million people), on August 10 the global furniture magnate opened its 400th global outlet, in Belgrade, some 30,000sqm of suburban Balkan bliss.

The only two other locations in the entire Balkans are in Zagreb (Croatia) and Bucharest (Romania), though Istanbul alone boasts two.

Mindful of local conditions, Ikea’s regional director Stefan Vanoverbeke promised the Belgrade location would boast the lowest prices in the region, to which one commenter on social media expressed their “condolences to Ikea product smugglers from neighboring Hungary.”

The politics is in the pudding

Whatever the upshot for Serbian consumers and Swedish shareholders, the implications for local and national politics have not been unforthcoming.

Writing in a daily Belgrade tabloid to commemorate the furniture store’s grand opening, Serbian President Aleksandar Vucic pinned his government’s legitimacy to that of the Swedish megabrand.

“IKEA does not exist where there is no desire to think and work in a new and different way,” he wrote. Indeed, the store’s arrival was but further proof of the “magnificent future” that awaited the country under his presidency.

Criticized by many (liberals) for his heavy-handed and semi-authoritarian tendencies, Vucic’s paean to the planet’s finest producer of mass-market meatballs struck a number of sensitive nerves in Belgrade.

A former far right-winger and longtime leading member of the ultranationalist Serbian Radical Party during the vicious Yugoslav wars of the 1990s, the 47-year old president and current chairman of the Serbian Progressive Party is now advocating European integration along the lines of a rational, consumer-based Weberian work ethic that he claims is sorely lacking in Serbian national life.

“IKEA changes the way you think,” he wrote. Its philosophy has the power to affect “every individual and all of society.”

“Along with the Labour Law [which gave employers more power],” he continued, “it the most significant ‘blow’ to obsolete and outdated parts of the mentality, to collective laziness and incompatibility, as well as the philosophy… that we should wait for someone else to do everything for us.”

For a country struggling against demographic Chinese water-drip torture—according to the World Bank, its population is now shrinking by 0.5% a year—and extremely sluggish growth (1%), the urge to drink philosophically transformational cool-aide is more than a little appetizing.

But the president’s op-ed also hinted at a less kosher aspect of his own personal background.

Praising the founder of Ikea, Ingvar Kamprad, for his enormous contribution to humanity, Vucic also noted how the 90-year old billionaire—who clocked in as the ninth wealthiest individual in the world before transferring his assets to his children, drives a 1993 Volvo, and is reckoned to pinch the salt and pepper packets from family diners—had also been an unrepentant fascist as a youth before later redeeming himself.

The parallel, the young president who has only been in power since May 2017, hopes, should be clear: there is still plenty of time to prove them wrong.

Whatever his moral admonishments, the people of Belgrade may have beat him to the gun. Of the 406 open positions at Belgrade Ikea, the store received 25,000 applications.

Digging up the hatchet

Hotdogs and Swedish Fish aside, it will take much more than a consumption-based cultural revolution to drive Serbia forward into a brave new EU-integrated world.

On August 20 it withdrew its diplomatic representatives from neighboring Macedonia after the latter hinted it was backing Kosovo’s candidacy to join UNESCO, the UN’s most important cultural body.

Once a constituent region of Serbia, Kosovo’s declaration of independence from Belgrade in 2008 has left more than bad blood between Serbia and the mostly ethnic Albanian 2.1 million Kosovars whose independence has been recognized by 114 countries, including 23 EU members—but not Slovakia, Greece, Cyprus, Romania, or Spain—or UN Security Council members Russia and China.

Not surprisingly, the thorn of Kosovar independence has also continued to poison Belgrade’s ties with Brussels and Washington, particularly when it comes to the largest Western Balkan nation’s chances of joining the EU, which it desperately seeks.

Though Vucic made an emergency phone call to Skopje on August 23 to patch things up and arrange for Serbia’s ambassador to return to Macedonia in September after summer holidays, this week’s scuffle still dented the momentum set in motion by the Scandi futon gravy-train.

If the country truly aspires to an Ikea-like existence predicated upon autonomy, hard work, and self-assembly, sooner or later it will have to break a loaf of lingonberry rye with Pristina.