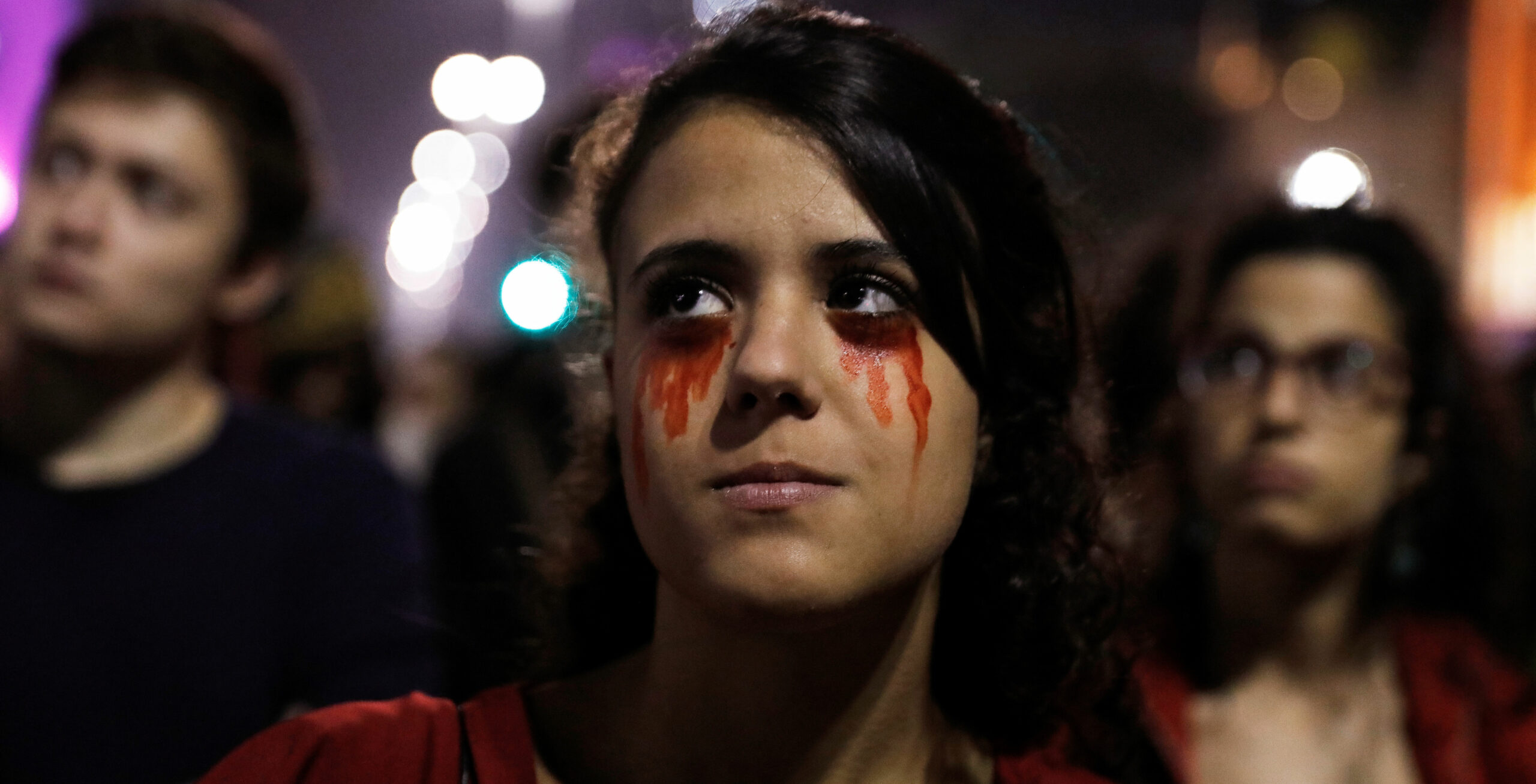 Gunning for a sovereign

How Bolsonaro won in Brazil

Share on:
Anger at violence, corruption, and a strong desire to punish the Workers’ Party have led Brazilians to elect the most controversial Latin American leader in decades.

Every fascism, Walter Benjamin once wrote, is an index of a failed revolution. In the case of Brazil, it is the colossal fall from grace of the Workers’ Party (PT), which governed the country from 2003-2016, which created the vacuum into which far-right revanchist Jair Bolsonaro was able to capture 55% of Sunday’s presidential election.

A man long famous for his fulminous jeremiads against women, Afro-Brazilians, gays, indigenous peoples, and leftists of every flavor, many observers have been in a state of shock since doing the electoral math: 46% of women, 41% of indigenous, and 37% of Afro-Brazilians—merely 8 points shy of what Workers’ Party candidate Fernando Haddad received—threw their weight behind the renegade congressmen from Rio de Janeiro promising a politicide of the left “the likes of which has never been seen in Brazilian history.” Why?

Though receiving the Wall Street Journal’s warm endorsement as the “Brazilian Swamp Drainer,” making him out to be a simple Trump of the Tropics is not only lazy, but also inaccurate. Now set to govern a terrifically more racist, violent, classist, and chaotic country, we may soon have to call Donald the Bolsonaro of the Beltway.

For starters, as many have pointed out, because the threat Bolsonaro poses to Brazilian democracy is far worse than anything north of the Rio Grande.

With much more fragile political institutions—a corrupt congress (more than one-third of which is now under criminal investigation), a weak press, and a politicized judiciary—the army captain’s nostalgia for military dictatorship will face far fewer hurdles once he takes office on January 1.

As he said quite bluntly in a 2017 speech, “We’re going to build a Brazil for the majority—a Christian, not secular, state—to which minorities will have to bend. Laws exist to defend the majority,” he told a jubilant crowd of men in a Campina Grande parking lot. “The minority must yield to these, or simply disappear.”

A president, not a boyfriend

Though Bolsonaro’s victory was preceded by a mass disinformation campaign via WhatsApp aimed at discrediting Fernando Haddad, the army captain had clearly struck a nerve: what good is democracy, his 58 million supporters seem to have said, if it brings neither peace nor prosperity? As one gay Bolsonaro supporter, 56-year old Fernando Paulo Louis, put it, “I’m looking for a president, not a boyfriend.”

Barely a year beyond its worst recession in history (2014-2017), during which the economy contracted by 8% and unemployment reached 12%, a figure it still hovers at today, last year was also the country’s bloodiest in history, with 63,800 murders.

While data from the Brazilian Public Security Forum shows that over 5,000 people were also killed by police in 2017, the evidence of a more general creeping social anomie seems irrefutable: from 2006-2016 alone, more than 550,000 people were murdered in Brazil, a death toll exceeding that of even the Syrian war.

Apart from its crushing emotional toll, the economic cost of such violence is also daunting.

According to a government study from this summer, recent homicide levels have cost the country more than USD120 billion in lost productivity over the past two decades, more than the entire Marshall Plan combined.
With rape also up 8% in 2017 to 60,000 reported cases, for many la mano dura promised by Bolsonaro could not come soon enough.

If violence, corruption, and a desire to punish the PT were the three principle reasons Bolsonaro stole the show on Sunday, his (not so) silent majority appeals to traditional “family values” also played their part.

For a violent, patriarchal society whose citizens are constantly torn asunder by a sense of up-rootedness, it may come as less of a surprise, then, that many women see him as their champion.

As one woman told El Espectador, his promises to come after perpetrators of crimes of passion and chemically castrate rapists were what won her over. After all, she lamented, women are the ones who bear the vast brunt of rising rapes and crimes of passion; no less than 4,500 women were murdered in 2017 alone.

Moreover, despite defending the pay differences that see Brazilian women earn but 76% of what their male counterparts make for the same job, Bolsonaro somehow managed to cast himself as the “anti-feminist” champion of Brazilian women.

And anyway, as another woman stated in a particularly sad reverse-Pollyannaism, “We already had a female president, and she did nothing to help women earn any more.”

For a country in which 54% of its inhabitants are Afro-Brazilian of some variety, perhaps most puzzling of all was Bolsonaro’s modest success among voters of color.

Though the Afro-Brazilian stand-in at his victory speech does not appear overly enthused, data shows Bolsonaro pulling in nearly 40% of their vote. Granted, a quick glance at the electoral map reveals huge racial and socioeconomic discrepancies—Bolsonaro overwhelmingly won the richer and far whiter southeast of the country, while taking a beating in the mostly black northeast. Yet as many have argued, black men in Brazil are nine times more likely to be murdered than whites or mestizos; if anyone stands to gain from better security, surely it is them.

Whether or not this kind of reasoning stems from a thoroughly “colonized mind,” as some have argued, come January violence in poor, urban, majority-black areas is likely to get worse before it gets better, as police are given carte blanche to very liberally interpret Bolsonaro’s quip that “the [only] good thug is a dead thug.”
Or, as another supporter put it somewhat more cynically, “Many blacks are voting for Bolsonaro precisely because the PT takes black people to be a certain kind of slave that must remain dependent on the white left to get anything in life.”

The many faces of revenge

Last but not least is Bolsonaro’s promise to transform the economy by unleashing Brazil’s animal spirits.
Along with his pledge to pull back from multilateral agreements such as Mercosur and keep China out of Brazil’s energy and infrastructure sectors, his promise to lift environmental controls and open up vast swathes of the Amazon and indigenous reserves to mining, logging, and other agribusiness interests has worried many.
Though it seems he will now backtrack from his pledge to merge the environment and agriculture ministries, he told Brazil’s Catholic TV that long waits for environment permits “cannot continue.”

Though sowing terror into tender hearts across the planet, the markets have been quick to reward him: the country’s benchmark Bovespa index in Sao Paulo gained more than 3% on election day, while the real has risen more than 13% since early September, when polls first showed him slipping ahead of his Workers’ Party rival.

This is precisely what many leading analysts, such as Thomaz Favaro, head of South America Global Risk Analysis at Control Risks, fear the most: that early economic success will only give him more cover to dismantle the country’s democratic institutions.

In his victory speech, Bolsonaro promised that Brazil would soon be a place where every citizen would have “the freedom to come and go, to walk on the streets, in every part of this country.”

Are not his countrymen selling themselves a little short? Or has life become so nasty, brutish, and short that 58 million voters will spring for any potential sovereign? It is a risk that too many see worth taking. As Hobbes once wrote:“To this war of every man against every man, this also in consequent; that nothing can be unjust. The notions of right and wrong, justice and injustice have there no place. Where there is no common power, there is no law, where no law, no injustice. Force, and fraud, are in war the cardinal virtues.”