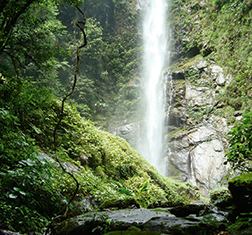 Share on:
Despite the unceremonious manner in which it eked out its famous peace deal in the final stages of the year, Colombia was in many ways the global darling of 2016. […]

Despite the unceremonious manner in which it eked out its famous peace deal in the final stages of the year, Colombia was in many ways the global darling of 2016. Its president Juan Manuel Santos was awarded the Nobel Peace Prize a week before losing the infamous (first-round) referendum, while The Economist named it country of the year for similar reasons.

Yet if great privilege truly entails great responsibility, then even greater challenges lie ahead. A land of immense natural resources, the country’s development can no longer be delayed due to internal security concerns. Spending must shift from soldiering to more permanent forms of statecraft, such as transport networks. Extensive new road and rail networks must be laid, and riverways such as the Magdalena modernized. Once these are furnished, the real struggles can begin: the long, hard, uphill slog to educate, employ, accommodate, and care for nearly 50 million people scattered across more than 1.14 million sqm of mountain, jungle, and desert.

As elsewhere, central to each of the state’s efforts to “win the peace“ will be the question of energy. The fourth-largest exporter of coal in the world and the fourth-largest exporter of oil in Latin America, Colombia has been blessed with carbon, which can be as much a curse as a benediction if certain precautions are not taken. For one, the country’s growth, tax base, and currency grew wildly reliant upon the price of crude: when the latter began to collapse in 2014, the results were swift and far-reaching.

Government revenues from oil fell by 60% in 12 months; reliant for nearly 20% of its budget on oil, the state saw a budget gap of 3.9% of GDP in 2016 and has projected another 3.3% gap in 2017. Meanwhile, the peso tanked by more than 50% in 2015-16 and has barely picked up since. While this has strengthened domestic exports, it has greatly increased the cost of importing environmentally friendly technologies critical to making the long-term transition to greener, sustainable sources of energy. To top it off, domestic and foreign firms have made next to no new oil discoveries in recent years, and production at the country’s largest well, Rubiales, has been scaled down.
The writing from pretty much every indicator is on the wall: if Colombia is to survive and thrive in the 21st century—conditions that are rapidly becoming mutually necessary—it must not only diversify away from carbon, but do so soon. All the better for it to so whilst the political momentum and physical capital to develop a robust green economy are on its side. For an underdeveloped country with extraordinary biodiversity, it would be folly not to.

Which is precisely what the country’s political leadership has set out to do. On February 1, President Santos and Simón Gaviria, head of arguably the nation’s most important institution, the National Planning Department (DNP), launched the Green Growth Mission (Misión de Crecimiento Verde). An ambitious initiative designed to boost growth both along more energy-sustainable and geographically equitable lines, the plan takes much of its inspiration from several admonishments in an earlier OECD report, Evaluating Colombia’s Environmental Performance 2014.

Headed by economist Hernando José Gómez Restrepo, Colombia’s Minister of Economic Planning, the move is part of the country’s broader accession process to join the OECD, the 35-member “rich country club“ with which Colombia began formal membership talks in 2013, and which has only accepted two Latin American countries in its history: Mexico in 1994 and Chile in 2010. To accede to the club would be a prestigious boon, to actually implement its environmental recommendations all the more beneficial in the long term.
Slated to make it the greenest economy in Latin America by 2030, Green Growth hopes to fundamentally restructure much of the Colombian economy’s architecture. For one, growth without sustainability will henceforth be shunned. To do this, Green Growth will enforce a stronger environmental licensing scheme for industries whose activities affect the environment. Second, environmental licensing will grow more stringent. Third, far greater emphasis will be placed on reducing inefficiencies in water, soil, energy, and primary materials. And fourth, a large concerted effort will be made to make the bio-economy not only proficient, but also export oriented and big enough to create a green workforce.
To do so, the government included a significant carbon tax in its tax reform and announced plans to double the amount of protected land in the country to more than 26 million ha, including the creation of two new national parks. As part of its growing efforts to play a larger role in the international community, Colombia also joined the Tropical Forest Alliance 2020. Hosted by the World Economic Forum in Switzerland, the alliance is a global public-private partnership aiming to drastically reduce deforestation, especially in the production of commodities such as soy, beef, palm oil, and pulp.

To be sure, Green Growth is far from the only means the state has used in recent years to spur the development of a green economy. In 2014, it unveiled Law 1715, which promotes the implementation of clean energy projects across various sectors (wind, solar, hydro) through creating new tax and accounting benefits, implementing new technical standards, eliminating import duties on equipment related to green energy, and establishing the first legal mechanism for firms and households to sell excess energy back to the grid. Though complaints have been made about the bureaucratic leaps involved in taking advantage of said benefits, most analysts agree it is a big step in the right direction.

Though Colombia generates two-thirds of its electricity from hydropower, there are signs that this will not be as reliable a source in the future due to long-term climate change and the increasing drought that certain parts of the country are already experiencing, particularly on the Caribbean coast. For one, an alarming report from late 2015 places both Cartagena and Barranquilla in the top 25 of 1,300 cities around the world that face the biggest potential productivity losses from climate-related changes. Colombia’s Institute of Hydrology, Meteorology, and Environmental Studies (IDEAM) has also predicted that shifting weather patterns will bring reduced rains in the longer term, making the push to solar all the more logical and necessary.
Under the jurisdiction of the Ministry of Mines and Energy (MME), the country recently adopted an aggressive Indicative Action Plan, which is targeting 3.5% on-grid and 20% off-grid renewable energy by 2015 and 6.5% and 30% by 2020. To do so, it will have to rather liberally increase solar, wind, and biofuel production in the coming years.

Despite critical barriers such as the devalued peso’s ability to import expensive dollar- and euro-denominated photovoltaic equipment (an expense that even Law 1715 could not forestall), the country is rapidly moving forward. The first solar plant in the country is slated to be fully operational by the third quarter of 2017. A 9.9MW photovoltaic plant consisting of some 35,000 PV modules set across 18ha, Celsia is expected to generate 16GWh of power per year and meet the energy needs of 8,000 local homes. Set in the municipality of Yumbo in the southwest province of Valle del Cauca and just north of Cali, Colombia’s first solar plant rather fittingly lies on land previously occupied by the Termoyumbo coal plant, closed for 20 years now.

The firm and namesake of the product, the Medellí­n-based Celsia, is currently developing four other solar projects in Colombia, in Valle del Cauca, Bolí­var, and Santander provinces, and one in Panama. If successful in Yumbo, it hopes to use the latter as a springboard for other PV projects throughout the country and region. Prior to Celsia’s debut, the largest PV arrays in Colombia were commercial rooftops that supplied several hundred kilowatts’ worth of energy, compared to Yumbo’s expected 16GWh. That being said, it is not the only firm to have taken off in the past 18 months. As of December 2016, 160 solar projects with a total generating capacity of 1.2GWh were registered across the country. Compared to the 120MW registered in February of that year, solar projects saw a 1,000% increase last year alone.

With a strong whiff of optimism, various reports have also shown that Colombia’s entire energy needs could be met by wind alone. The northern Caribbean province of La Guajira, for example, better known as home to the Wayuu people and a variety of world-class smugglers, is also thought to harbor some 21GW of wind capacity. Ranked a class 7 (somewhere around 10m per second), it is one of the windiest regions in all of Latin America and one of only two in the entire region to reach that speed. The country’s first operational wind farm, Jepirachi, is also located in La Guajira, though many also see the northern Orinoco and San Andrés regions as two other suitable locations to build wind farms. A USD27 million project spanning 220ha that began in 2001, Jepirachi is also seen as a landmark development for the enlightened, open-minded, and democratic manner in which it consulted with the local Wayuu people whilst constructing it. As such, the 19.5MW project thought to benefit some 120,000 people will serve as an example of “green growth“ going ahead.

Biomass is also thought to be a useful, if less bounteous, source of renewable energy in Colombia. After all, the natural refuse of agriculture waste is abundant in this part of the world: from coffee, banana, and rice plantations to the country’s vast livestock holdings, biomass is one of the country’s most plentiful resources, from the Caribbean and Norte de Santander in the north to Llanos Orientales in the east and Valle del Cauca in the southwest. One important plant, Ingenio Mayagüez, interestingly got its start as one of the country’s largest sugar cane producer. After a 2007 law pushed through by then-president Alvaro Uribe required 10% of all petrol sold in the nation’s gas stations to be derived from ethanol, the race to diversify away from sugar alone was on.

Though that law has been scaled back to 8% as a result of pushback from the petroleum industry, it set an important precedent: what began as a sugar plantation and soon transformed itself into an ethanol manufacturer quickly became the country’s first biomass co-generation plant, with a rate of 37MWh per day. If the state can encourage and coordinate this creative resourceful dynamism on a much vaster scale, Colombia is well poised to meet a significant proportion of its energy needs through renewables by 2030.