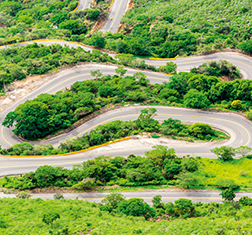 Share on:
Falling oil prices have led to sluggish GDP growth, but good governmental leadership and a stable fiscal base is cause for belief that the country can return to form.

2016 was a mixed bag for Colombia. The year brought a landmark peace deal that ended Latin America’s longest-running civil conflict and new milestones in poverty reduction and infrastructure access in rural communities. Yet Colombia also saw GDP growth drop to the lowest rate since 2009 due to falling oil prices and regional instability, which has contributed to a Latin America-wide slowdown. Growth projections for 2017, while below pre-2016 levels, are up slightly, and there’s reason for broader optimism about the state of the country. Strong government leadership has tempered social issues and brought down the inflation rate ahead of international projections, giving regional and international investors the confidence that Colombia will remain an economic force for years to come.

Before 2017, Colombia’s economy had been one of Latin America’s greatest success stories over the past 15 years. Annual GDP growth averaged 4.58% from 2005 through 2015, hitting a low of 1.65% in 2009 in the midst of the global economic downturn but remaining at well over 3% for the bulk of the decade. Most of this was powered by petroleum, which accounted for around two-thirds of all export earnings over this time frame. Over the last two years, however, the fall in crude oil prices has dramatically decreased Colombia’s revenues from these exports, setting off an interconnected chain of events that has led to decreased GDP growth in each of the past three years. After posting growth of 4.39% in 2014, GDP growth fell to 3.08% in 2015 and then 2% in 2016. Before the one-year drop in 2009, Colombia hadn’t posted growth of less than 3% since 2002, making 2016’s performance an eye-opening result for government officials and investors around the world.

BUMPS IN THE ROAD

How did one of Latin America’s success stories post such a disappointing economic performance? The complex answer speaks to the interconnected nature of the modern globalized economy. As mentioned, Colombia’s economic growth over the past decade was powered by a rise in oil production stemming from regulatory reforms passed in 2003. High global oil prices and a welcoming investment environment led to increased investment and a corresponding rise in production; between 2007 and 2015 oil production doubled to reach a new high of over one million barrels per day (bpd). But investment has fallen with the global decline in prices in recent years, and the sector has struggled as a result. Oil production dropped 12% to 885,000bpd in 2016 after some wells closed due to fiscal problems in the face of lower prices. The Colombian government has set a goal of 865,000bpd for 2017, but the sector faces fundamental issues that may make this difficult. Colombia’s proven oil reserves have decreased significantly in recent years, and the lack of new investment means that exploration has slowed; no major oil reserves have been discovered since 1992. In 2014, Colombia’s proven reserves were 2.3 billion barrels, but that number has dropped to 2 billion, according to some accounts. As a result, petroleum exports, which amounted to more than USD27 billion in 2013, fell to USD10.1 billion in 2016, a drop of more than 29% over the previous year. With such a drop in revenue, it is little surprise that the 20% of public funding that depended on petroleum revenues has evaporated.

While one of Latin America’s more stable political situations, Colombia has also had to deal with its share of social unrest and the economic problems that have come with that. The long-running civil conflict between FARC rebels and the Colombian government often bubbled over and affected oil production; there are estimates that more than 4 million barrels were lost to attacks over the past 30 years. The logistical issues that come with the country’s varied terrain and high levels of underdevelopment allowed rebel groups to disrupt production, affecting efficiency and investor confidence. The peace deal signed between the Colombian government and the FARC in late 2016 brought the primary conflict to an end, but wider regional problems still remain. Social unrest in Venezuela has led to political and economic tensions between the two countries. Colombia’s second-largest export partner as recently as 2008, exports to Venezuela have dropped drastically, a reality that only begins to explain the economic damage the shattered relationship has wrought. Colombia’s exports to Venezuela and its other Latin American neighbors tend to be value-added products, in contrast to its export to more developed markets like the EU and the US. The decreased volume of regional trade has brought down the Latin American economy, eroded investor confidence, and initiated a series of political issues that have led to difficulties as Colombia tries to manage the fallout from its next-door neighbor’s instability.

Yet despite all that, the Colombian economy is still positioned to remain a leader in Latin America. The government’s considered response to the recent economic troubles have given participants confidence that Colombia’s core fiscal and economic health remains strong and that the nation has better days coming soon. A few major programs look to play a crucial role in the upswing over the next few years. Colombia’s government has launched an ambitious infrastructure plan that seeks to take advantage of the end of major conflicts to help develop previously overlooked areas. This should aid in the diversification of the economy away from oil, boosting revenues and producing more stable long-term revenue sources. The government has also recently implemented a major tax reform, which is expected to move more people to formal employment, hopefully boosting private consumption and developing a more mature economy.

Launched in 2010, Colombia’s Fourth Generation (4G) transport infrastructure plan is now in full swing. More than USD24 billion in public-private partnerships and private investment are planned, with the majority of this going to road and bridge improvements. Transportation infrastructure has long been one of the main barriers to Colombia’s economic growth; while industrial sectors have developed well in the nation’s major cities, Colombia’s transport infrastructure has lagged well behind. The World Economic Forum’s Global Competitiveness Index ranked Colombia’s roads 120th in the world in 2016, well behind almost all its peers in Latin America. To change this, President Santos has announced plans to build over 7,040km of roads, 141km of tunnels, and 150km of bridges by 2020, with priority given to routes that link key logistical points and increase the ease of shipping overland. Work on the 4G plan is far from complete, as the loss of oil revenues has forced the government to find additional sources of financing, but participants are optimistic about the future of the project.

Improved transportation infrastructure is a stepping stone to the larger goal of a more diversified economy that takes advantage of Colombia’s rich supply of natural and human resources to produce more value-added goods. Marí­a Claudia Lacouture, Minister of Commerce, Industry, and Tourism, identified six sectors with significant potential in a recent interview. “We designated six productive sectors as having strong potential: agro-industries, metalworking, industry 4.0, tourism, the fashion and textile industry, and chemicals,” Lacouture told TBY. “[We are making] a huge effort to work with businessmen in each sector to increase productivity, innovation, and competitiveness.”

Colombia also has the benefit of a well-regulated financial sector that has taken care to act in accordance with international standards. The fall in oil revenues brought inflationary pressures that threatened to balloon the fiscal deficit and threaten the financial stability of the country. The peso lost close to 80% of its value between 2014 and 2016, as inflation reached a 16-year high, but the Colombian central bank responded by aggressively raising the benchmark interest rate to 7.75% over a period of 11 months before dropping it to 7.5% by the end of 2016 as inflation slowed faster than anticipated. Early 2017 saw inflation continue to fall and the central bank responded by cutting the interest rate to 6.5% in April 2017. The central bank anticipates returning to its target inflation range of 2-4% by mid-2018. The aggressive interest rate actions reflect the central bank’s belief that the fiscal health of the nation is assured and that energizing the economy by raising investment is the biggest challenge facing the nation at the present. Colombia’s budget deficit issues should also be alleviated in the near future by the tax reform passed in late 2016. The reform raised the value-added tax, lowered the effective corporate income tax rate, and strengthened tax evasion penalties in an effort to recoup lost revenue from the fall in oil exports. While the effects are still waiting to be fully realized, economic leaders are largely optimistic that the reforms will decrease the burden on businesses to provide revenues and move more Colombians into the formal economy.

PEACE IN OUR TIME

Perhaps the single-most positive indicator for the future of the Colombian economy is the optimism that came with the landmark FARC peace deal. It is well understood that uncertainty is bad for markets and investor confidence, and with the long-running civil conflict over, new opportunities for economic growth should arise. Peace brings possibilities, ProColombia President Felipe Jaramillo Jaramillo told TBY. “In the context of a post-conflict era, we have been talking consistently about a bigger Colombia,” he added. “We believe that many of the regions of the country that were falling behind in terms of development as a result of their proximity to the conflict are now open to the world, including foreign investment and international visitors.” All sides understand that it will not be a seamless process, but the solid foundation formed by a population willing to put in the needed work to grow and develop have given all good reason to be optimist about the future of the Colombian economy.