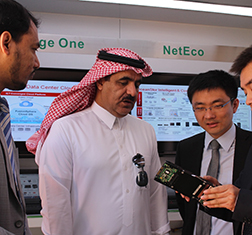 Share on:
The future of Dubai is smart, as even abstract concepts like happiness are assigned a numeric value.

Technically speaking at least, ICT involves the soulless processes of data management and transmission. Yet according to HE Wessam Lootah, CEO of Smart Dubai Government, the goal of the Smart Dubai vision is no less than leveraging those zeroes and ones, “to make Dubai the happiest city on earth.” This notion of happiness is based upon a customer-centric approach that underpins the delivery of data and provision of government services, and on the systematic measurement of how those services are accessed and perceived, by business and citizen alike. In May 2016, the official Happiness Agenda was launched by HH Sheikh Mohammed Bin Rashid Al Maktoum, Prime Minister & Vice-President of the UAE, and Ruler of Dubai. And thus far, the indications are good, as meters deployed across 500 state-sector touch points had, by mid-2016, toted up a city-wide 89% happiness level.

The responsibility for ensuring a smooth rollout of related technology falls to HE Dr. Aisha bin Butti bin Bishr, Director General of Smart Dubai Office. Yet ultimately, the innovative dynamo of Smart City Dubai is seamless collaboration between public and private sectors across industry and academia. For business, she explained in a TBY interview, “In terms of ICT infrastructure, we have implemented an artificial intelligence tool called Saad in partnership with the Department of Economic Development.” This “new personal concierge” replies to all business-related questions to expedite commercial processes. She also cites, “DubaiNow, a mobile app created by the Smart Dubai Government, unifies several government and private sector applications into one, which means that people no longer require hundreds of applications for government services.”

The Smart Government initiative emerged in 2013, at which point the Digital City ambition was upgraded to the results-oriented Smart City project, its Smart Platform initiated in 1Q2016. The financial advantages of the move toward full digital transformation is clear, and HE Wesam Lootah cites a state-commissioned independent study that, “…found savings of USD1.2 billion, of which USD327 million was saved in the government shared services area (and which makes) a 300% savings on a spend of USD105 million.” Meanwhile, according to Tayfun Topkoc, Managing Director for the UAE of SAP, that firm’s Ariba cloud system has the potential to save the UAE state sector USD272 million per annum. Data integrity, too, is a major consideration. Accordingly, automated Blockchain technology that mitigates systemic weakness and financial irregularity is set to be fully implemented across the state sector by 2020.

The guiding hand of ICT is felt far beyond the state sphere, ranging from paperless shipping at Dubai’s megaports to efficiently nurturing SMEs. HE Dr. Aisha bin Butti bin Bishr stressed that the launch of the Dubai Data Platform expands, “our services and initiatives to cater to all entrepreneurs and start-ups in Dubai so that they can benefit from government data. The platform provides, “analytical tools to deal with big data and enriched data pulled from the Internet of Things around the city.”

We live in an era where one-size-fits-all software solutions are no longer uniformly adequate. And while the public sector remains the prime investor in ICT solutions, its coffers also notably foster the incubation of private sector innovation that will further advance the march of the data economy. Dubai contains the region’s most comprehensive technology community, effectively its very own Silicon Valley—Dubai Internet City. At around 1.5 million sqft of office space, it provides a cohesive focal point for the entire ICT value chain. The ICT hub has for more than 15 years offered soft terms, including taxation and ownership rights to start-up SMEs and major international players such as Facebook, LinkedIn, Google, Dell, Intel, and Huawei alike, guaranteed by law for 50 years.

Majed Al Suwaidi is the Managing Director of Dubai Media City, Dubai Studio City & Dubai Production City, and another sectoral example of the innovative minds propelling Dubai to the forefront of ICT implementation. Identifying a core audience for creative products, he noted that data views on mobile phones had, “jumped from 11% in 2011 to almost 70% in 2015 (whereby) the industry is focused on younger audiences and new platforms for content.” In fact, Dubai Studio City, the largest studio spanning 50,000sqft, has recently partnered with YouTube to open the first YouTube Space in the MENA region, and tap a young and tech-savvy region where almost 50% of the population is under 24 years of age. Which neatly segues into…

Majed Al Suwaidi continues that, “2017-2018 is set to be an era of many ‘mobile-first’ markets in the MENA region, and the stage of content on the small screen.” Mobile penetration across the UAE in 2015 had approached close to 210%. Data from the UAE’s Telecommunications Regulatory Authority (TRA) respectively puts 2015 pre-paid and post paid mobiles users on 15.4 million and 2.8 million. Mobile Number Portability (MNP) became possible in December 2013, and for 2015 a monthly average of 11,524 mobile subscribers opted to switch between operators, up from 9,126 the year before, underlining the competitive climate. Tellingly, in 2015 the average monthly minutes per user (AMPU) print for post-paid users of 329 was up from 274 in 2014 on a steady upward trajectory. In contrast, the prepaid figure of 117 was down from 2019 a year earlier, continuing a downtrend. Also indicative of users increasingly choosing to pay more for desirable services, 2015 pre-paid revenues of USD844 million were down from USD4 billion in 2014, while for the period, post-paid revenues had risen from USD2.68 billion to USD3.2 billion. And glancing at the “www”, as of for 2015 the UAE’s 14.4% internet penetration had risen from 12.9% in 2014 on 1.2 million subscriptions. Total revenues of USD1.6 billion were up YoY from USD1.3 billion, sustaining upward annul momentum.

Etisalat, a major telco in Dubai’s mobile market (53.1% market share as of 4Q2016), is primed to capitalize on Dubai’s fast-approaching major event, Expo 2020. This will be a vital international showcase for the country, which already spearheads the region’s telecoms, ICT, and consumer electronics markets, having also built the infrastructure to champion local content. Etisalat, present in 18 markets across the Middle East, Asia, and Africa with 167 million subscribers in 2015, is working to launch next-generation 5G services across the UAE in 2018, specifically to highlight the full scope of the Smart City initiative, ahead of the big event. The telco’s overall 9M2016 net profit of USD1.7 billion was up 9% YoY. And while YoY growth for the group’s UAE operations were down 1% for the period, its Pakistani operations registered an impressive double-digit print of 22%. Etisalat Group’s 2016 revenues climbed 2.01% YoY to USD14.3 billion largely on the back of UAE and Maroc Telecom operations. Indeed, in Etisalat’s six biggest markets, namely Pakistan, the UAE, Saudi, Egypt, Nigeria, and Morocco around 50% of the population is younger than 25, boding well for potential data sales.

Back in the UAE, package and price competition is the state of play. Officially called Emirates Integrated Telecommunications Company (EITC), du, with a 46.9% market share as of 4Q2016, is the second player in the UAE mobile market. du’s FY2016 total revenues of USD3.5 billion were up a slender 0.3% YoY. The 2016 net profit before royalties of USD1.1 billion was up 0.1% YoY; this was kinder than the 2015 decline in net profit of 8%, where royalty fees paid to the government had cut deep.

A decade old this year, du has celebrated with special offers for pre-paid and post-paid mobile customers of 10GB for the price of 1GB, 20GB for the price of 5GB, and 50GB for the price of 25GB during a 30-day period to whet appetites for data. Tapping, and it seems even cannibalizing, user groups is par for the course in the telecoms arena. Because at the start of 2017, du launched its second brand in the UAE, Virgin Mobile. The telco stresses that this will not be a license-holding third operator, or operate as a mobile virtual network operator (MVNO) in the UAE.” Rather, Virgin is to be positioned to take some users from Etisalat, while cannibalizing some of its own customers by tapping the tourist market, more familiar with the Virgin brand.

The UAE’s TRA monitors the performances of the two local operators. Selected results for 2015 were based on data reading across all the Emirates, with key highways and buildings included. The latest study indicates that while du’s voice quality was superior for outdoor calls, Etisalat’s was better for indoor calls. In terms of voice quality, du printed at 97.02% and Etisalat at 95.33%. And in terms of call drop rates Etisalat, at 0.25%, just pipped du, at 0.30%, to the post. Meanwhile, regarding double service coverage for both 2G and 3G, both Etisalat and du exceeded 99% by TRA numbers.

And on a Wider Scale

On a regional and international scale, the UAE’s ICT achievements are impressive. The 2016 International Telecommunications Union (ITU) Measuring the Information Society report, since 2009, benchmarked and assessed the progress of its information society. It includes the ICT Development Index that annually gauges the level of ICT development across 175 global economies. The UAE ranks a high 38th in the world, and second among all GCC and Arab nations. Among notable achievements, the UAE ranked eighth in the world both by household internet access and by households with personal computers. Furthermore, in the Networked Readiness Index, which measures an economy’s ability to leverage ICT to boost competitiveness and development, ranked the UAE first among Arab states and 23rd among all 143 participating countries. And finally, the 2016-2017 World Economic Forum’s Global Competitiveness Index (GCI), which establishes the microeconomic and macroeconomic foundations of national competitiveness, placed the UAE 16th out of 138 countries in the GCI and first among all Arab states. Among the benchmarks of the competitiveness index is Technological Readiness and Innovation, which is nothing if not the primary directive of Smart Dubai.
In short, Dubai, like the wider UAE, is extremely proactive in shaping the technological foundations of the information economy. And while the market is competitive, innovation is leaving no stone unturned for growth.