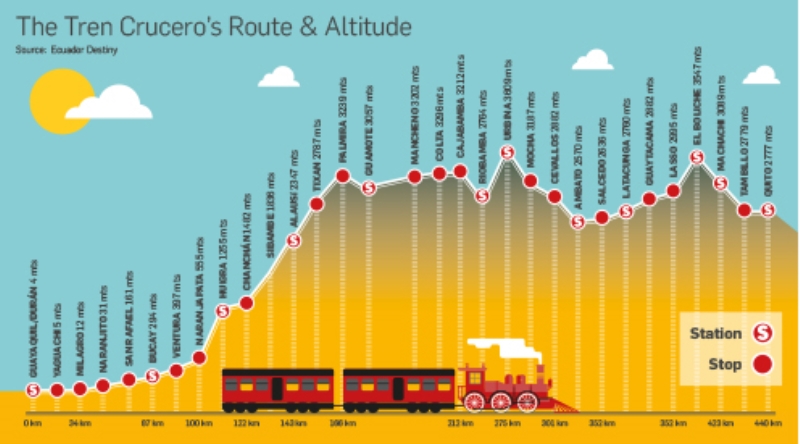 Share on:
Construction of the line originally began in 1897 and was not finished until 1908. The original locomotives have been restored, the oldest of which is nearly 100 years old, and […]

Construction of the line originally began in 1897 and was not finished until 1908. The original locomotives have been restored, the oldest of which is nearly 100 years old, and coupled with new luxury carriages built in Madrid. The idea behind the restoration is an attempt to boost economic activity in places tourists would otherwise be unlikely to visit on the route, places such as Casiguana, which was abandoned when the train stopped passing by. It is hoped that by connecting these severed links, numerous villages along the route will once again become economically sustainable. “The communities on the train lines are the ones in charge of managing them, so we will increase their level of participation, generating job opportunities with as many as 5,200 direct employment positions and around 16,000 indirect ones, as well as providing economic alternatives to these communities,” Eduardo Carrera, General Manager of Ferrocarriles del Ecuador, explained to TBY.

With Quito being 2,800 meters above sea level, passengers are treated to some of the most exhilarating and astonishingly beautiful views. One of the most thrilling sections is what is called the Devil’s Nose. Through a series of mind-bogglingly tight switchbacks, the train manages to descend 2,945 meters in only 56 kilometers, making for a hair raising and exciting section of the journey. The Devil’s Nose took four years to build between 1904 and 1908 and cost the lives of over 4,000 workers. Now, the section is much safer and a highlight for many tourists. Another highpoint of the journey is the Avenue of Volcanoes. At over 3,609 meters high, it is one of the highest points of the journey and passes by 10 volcanoes. In Urbina, a new visitors center has been built, which it is hoped will increase economic activity.

The journey takes four days to complete, and passengers spend three nights sleeping in local hotels as the train only travels in daylight. In 2015, the price for an adult will cost $1,393, which will include all the hotels and the ticket. Ferrocarriles del Ecuador has been promoting the line heavily with tourists, and has spent $10 million on advertising in the US and the EU.