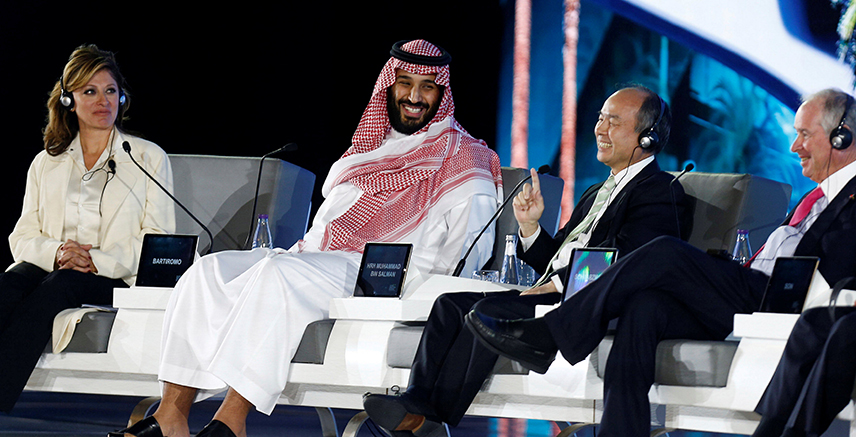 Share on:
Mohammed bin Salman, also known as MBS, is not a normal prince in the mold of those who have come before him. He is an unconventional leader, and he proved it in several ways during the Future Investment Initiative (FII).

Mohammed bin Salman, also known as MBS, is not a normal prince in the mold of those who have come before him. He is an unconventional leader, and he proved it in several ways during the Future Investment Initiative (FII), a massive conference organized by Saudi Arabia’s Public Investment Fund. First, he didn’t show up as scheduled to give the opening speech on the morning of the event’s first day. Instead, he appeared much later on the day, and sat on a panel with several of the world’s richest people, with whom he has recently signed multi-billion dollar deals.

The very fact that the crown prince was sitting on a panel and the symbolic equality that the format imparts is remarkable. None of several Saudi watchers TBY interviewed could recall any of MBS’ predecessors being on panels. Perhaps just as remarkable was that beside the crown prince sat Maria Bartiromo, an American business journalist and presenter who also happens to be female and was not wearing a hijab. While not unheard of, the symbolism was clear.

During the panel, Mohammed bin Salman issued perhaps the clearest rejection of Saudi religious orthodoxy that he has yet offered. “70% of the Saudis are younger than 30. Honestly, we won’t waste 30 years of our life combating extremist thoughts; we will destroy them now and immediately,” he said during the panel. In later interviews he expanded on this theme and seemed to suggest that the Kingdom’s ultraconservative religious leaders would enjoy substantially less influence in the coming years as the country becomes more open.

While former leaders have struck similar tones when abroad, none has confronted the religious right so openly.

Just weeks before the conference, Saudi Arabia allowed women to drive, a move that had been debated for decades. The day of the conference, an article appeared in the government-controlled Arab News that covered a rare film festival in Riyadh. Its opening lines read: “The lights go out, the projector whirls, and entertainment-starved Saudis sink into plush seats to soak up an experience they have been denied for decades — a trip to the cinema.”

Make no mistake. Saudi Arabia has entered a new era.

Recent megaprojects have not mattered. Are this one’s chances better?

During the conference, a new megaproject was announced. A city, called NEOM, which will cover a vast stretch of land along the border with Jordan and Egypt in the country’s northwest. It is expected to cost USD500 billion over the course of several decades, and cover some 25,000sqkm. It is intended to become a new hub for innovation and technology and be powered entirely by renewable energy.

NEOM is not the first incredibly ambitious megaproject that Saudi Arabia has embarked on. In 2014 it established four “economic cities” that it valued in the billions of dollars and estimated would transform Saudi Arabia’s economy and attract dozens of investors. Only one of those cities, King Abdullah Economic City, has seen success, albeit limited, largely due to its proximity to a greenfield, privately owned and operated mega port. In 2011 the Kingdom began construction of the King Abdullah Financial District, a nearly USD10 billion development consisting of 59 office towers. Today, although almost complete, it stands nearly empty, yet is said to contain more office space than the whole of Riyadh.

These past projects illustrate the risks of ambition backed by vast fiscal resources. Often the future is not as it seems. The vision could run into some of the same issues that dragged earlier attempts at economic reform into irrelevance.

Despite the enormous excitement among financiers and businesspeople about the reform program, all parties are watching the pace of the reforms and their implementation. The single-most important indicator of Saudi Arabia’s seriousness is the IPO of the state oil company, Aramco. The reason is that Aramco is deeply intertwined with the Saudi state, and with the royal family. Nearly all of the liquidity that guarantees lavish lifestyles for thousands of princess and princesses comes from Aramco.

Furthermore, a key piece of the Kingdom’s geopolitical power, the ability to swing oil production, depends on its control of Aramco. Still more ominous is the possibility of a market valuation that is vastly lower than expected. That could threaten the Kingdom’s economic stability and slow the pace of reforms.

These are only a few of the issues and risks present in the listing. During the conference MBS again insisted that it would take place next year. Still, there are scant details available, and many observers predict that it will be exceedingly difficult for even the crown prince to push his agenda through by that time.

The times they are a changing

If anything is certain it is that the Kingdom has largely succeed in advertising its new era of reform. Never before has an event of the same scale been held in Saudi Arabia, and the country has rarely gotten so much positive press. The current push for reform is the most serious ever witnessed, and because of that, it has a good chance of succeeding in at least some of its goals.

However, no modern economy has yet transformed itself from resource dependence to a more sustainable model. In Saudi Arabia, it will not happen overnight. Perhaps the best way to understand this week’s event is a statement of intent from a man who intends to rule Saudi Arabia for a very long time.