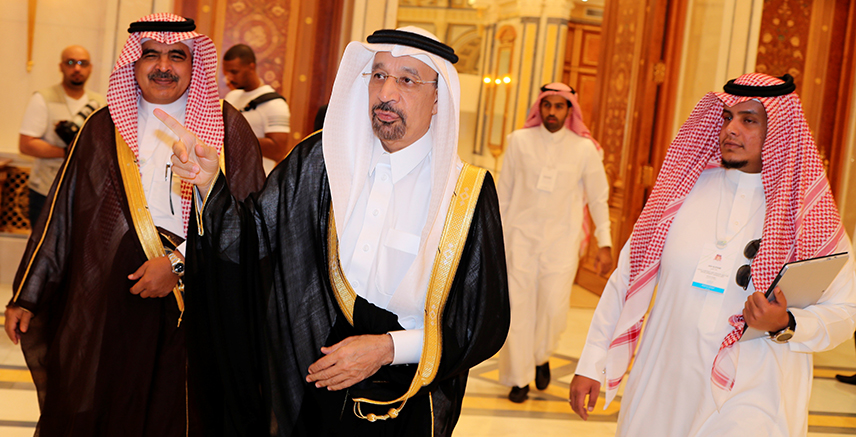 Mohammed bin Salman arrived by helicopter this morning to a hotel packed with some of the most important figures in the world of business.

The Future Investment Initiative (FII), a massive conference organized by Saudi Arabia’s Public Investment Fund, is perhaps the largest gathering of globally influential business leaders this year besides Davos, and it is taking place in Riyadh, Saudi Arabia. Its star power is virtually unrivaled.

The conference’s key speakers include Christine Lagarde, Managing Director of the IMF, Stuart Gulliver, CEO of HSBC Holdings, Larry Fink, CEO of BlackRock, Masayoshi Son, Chairman and CEO of SoftBank, as well as the CEOs of the New York and London stock exchanges.

Beside these headline names are dozens of key players in industries ranging from energy to robotics to finance. There are few organizations, and even few governments, that could have organized such a massive and high-level event and guaranteed the roster of speakers that the FII does.

Saudi Arabia’s Public Investment Fund (PIF) is in a unique position to draw such participants. It sits at the center of Saudi Arabia’s ambitious Vision 2030 reforms. It controls hundreds of billions of dollars of oil wealth, as well as some of its key strategic assets. More importantly, part of its stated strategy is to invest in opportunities and foreign firms that will aid in diversifying Saudi Arabia’s economy and its government’s revenues away from oil.

The PIF was once a relatively static sovereign wealth fund. It transformed as Mohammed bin Salman rose to his current position of Crown Prince. Yasir al Rumayyan, an experienced Saudi banker, was appointed as CEO of the fund in 2015, and has led a restructuring campaign that has catapulted Saudi Arabia onto the international stage.

The PIF has already proven its liquidity and ambition with a string of global investments, including committing USD45 billion to Softbank’s technology fund, USD20 billion for Blackstone Group’s infrastructure fund, and USD3.5 billion for Uber, among other substantial investments.

The fund plans to become the world’s largest after an IPO of Saudi Aramco on international capital markets. The Kingdom’s state oil company could have a valuation of well over a trillion dollars when the IPO happens sometime next year.

The Vision 2030 strategy also plans to use the financial weight of the fund to create returns for the Saudi Arabian government that will start to replace oil revenues and fund domestic spending.

This week’s forum is all about the global ambitions of the funds involved, and of Saudi Arabia.

It cements the PIF and Mohammed bin Salman as players with profound global influence, and sets the stage for an aggressive investment program that will see the fund’s foreign holdings increase from 5% of the total to 50%.

The event also shows that the world’s largest and most influential corporations and people will compete to work with the Kingdom and the PIF. The fact that Saudi Arabia can bring so many influential figures to its capital in the midst of a recession is a testament to the power of its message of economic and social reform.