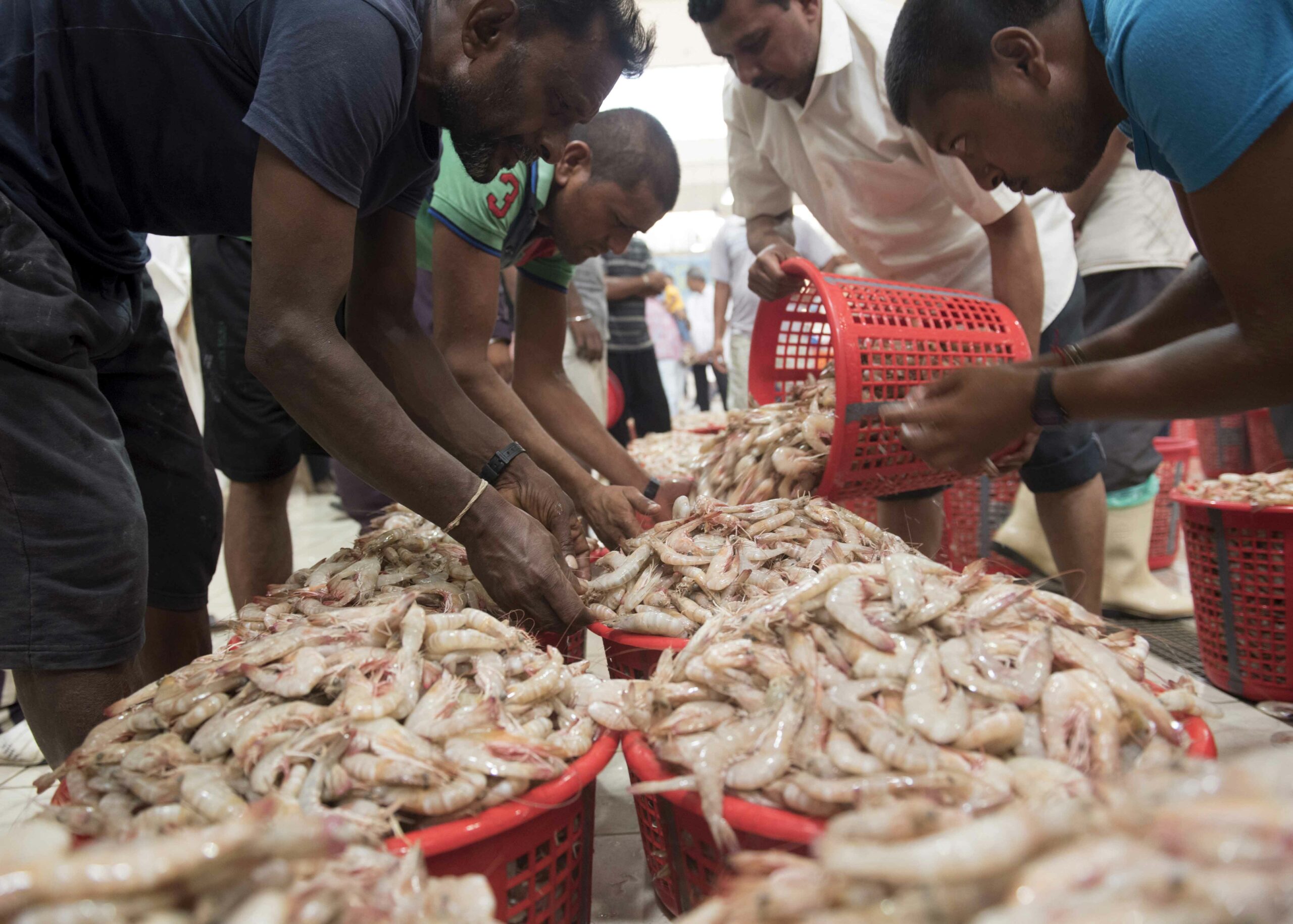 Share on:
Kuwait has never been referred to as a breadbasket; instead, it is labelled a sandbox with some hefty oil revenues that afford the food import bill. Indeed, like its GCC […]

Kuwait has never been referred to as a breadbasket; instead, it is labelled a sandbox with some hefty oil revenues that afford the food import bill. Indeed, like its GCC counterparts its export revenues from oil and gas allow for a system of trade-based food production. The reason for this is self-explanatory; the climate is not overly conducive to farming, with long, dry, and hot summers with temperatures of over 45 degrees centigrade, with frequent sandstorms. The rainy season is from October to May, and in that period the annual rainfall is less than 300mm across an area of 100sqkm. To put that in perspective, across 100km for a whole year, it receives little more than a tall glass of water. The lack of water means that agriculture has seen minimal development and the country is heavily reliant on food imports.

With no permanent rivers of lakes, groundwater is Kuwait’s only natural water resource. In a report by World Resources Institute in 2015, Kuwait was placed among the top nine countries facing “an extremely high water risk“ by 2040. Kuwait relies on an inflow of about 20 million cbm per annum in lateral underflow from Saudi Arabia. As it stands, there is no charge for the use of groundwater supplies, which has led to wasteful practices in agriculture, which is responsible for 54% of its usage, and misuse of this high-quality water by the sector has only hampered the development of an agriculture industry. Almost all of Kuwait’s cultivated area relies on artificial irrigation.

Kuwait’s landscape is relatively flat, with slightly undulating desert plains sloping gently toward the northeast. The desert is punctuated by a few oases. Various reports over the years have calculated the acreage of potentially cultivatable land. Today, it is judged at around 150,000ha, which is an area a little smaller than the total area of Finland’s autonomous í…land Islands. Estimates about areas that can sustain crops constitute between 25,000 and 37,500ha, which is an area the size of the Maldives. A decade ago, the number of productive farms in this area was 1,373, but they are unable to make more than a small dent in Kuwait’s food import bill. This prospect is also hampered by the fact that arable land is shrinking at a rate of 1% per annum.

Livestock production is the most important component of agriculture, contributing the biggest percentage of agricultural GDP (67%), while plant production makes up around 23%. There is some activity in the fishing industry that makes up the remaining 10%, but it serves minimal domestic demand.

Much of the fishing for the local market was done by small boats, like the native dhow. Local waters are home to meid, mullet, and cultured European sea bream. The more commercial level of fishing was confined to the United Fisheries of Kuwait, which operates a fleet of vessels that ventures into the Indian Ocean, the Red Sea, and the Atlantic for its hauls. The attractiveness of the industry has been hampered by reports of over-fishing in the 1970s, which led to considerable drops in numbers that was not helped by decades of more oil spills and environmental damage to Kuwaiti waters, making it a highly stressed body of water that is often the scene of massive fish kills.

Historically the authority supported efforts to increase vegetable production through hydrophonics. In 1989, Kuwait produced 40,000 tons of tomatoes, 25,000 tons of onions, 7,000 tons of melons, and 1,000 tons of dates. Today, however, the idea of growing plants in Kuwait, given the expenses involved, is ultimately counterproductive.

Another initiative that has made inroads in ambition of achieving long-term agricultural sustainability is the Arid Land Agriculture Production Program (AAP), which is run by the Kuwait Institute for Scientific Research, established in 1967 to address key challenges facing the nation through research and development. The AAP has been working to develop techniques that bolster local practices, such as soilless production techniques that save and recycle 90% of the water. The organization is also working with the Kuwait Livestock Transport and Trading Company to enhance productivity. Together, the two have managed to bring down the mortality of their dairy cows from 44% to 5%, and of young calves from 9% to 1%.

Very few expect or could even imagine Kuwait becoming self-sufficient in its food production. However, it is important that the country has a food industry for the sake of its overall food securing. Already, investments are being made in building and maintaining a food industry capable of ensuring a reliable and high-quality food supply for the population.

Part of this ambition is to enter the value addition chain. The EU, for example, makes millions of euros from exporting processed food products to Kuwait, far more than it does by exporting raw materials. For example, it exported EUR55 million worth of pasta, pastry, biscuits, and bread to Kuwait in 2015, but did not export a cent’s worth of wheat. The total value of prepared food products that were exported from the EU to Kuwait in 2015 was EUR237 million.

The idea of bringing food production processes to Kuwait was previously shot down by the fact that in order to process food you need temperature-controlled environments and plenty of water. Kuwait imports over 96% of its food, and more often than not in its final form. Government spending is expected to exceed oil revenue in 2017, and the importance of economic diversification is being pressed ever more firmly by the low oil price environment.

There is also the added issue of potential supply disruption to add into the mix. Kuwait’s geographic location, bordering Iraq and in close proximity to Iran, introduces geopolitical considerations into the food supply chain. For example, in the past Iran has threatened to close vital trade routes in the Arabian Gulf, potentially hampering the delivery of food imports. For example, improving food storage facilities could go some way to mitigating the threat of supply disruptions and would enable local industry to better capture domestic production.

In May 2015, Kuwait announced a plan for food self-sufficiency by 2040. Although some have deemed this ambition unfeasible, there are some pockets of production, such as poultry, which could become self-sufficient if properly managed.

Some local entrepreneurs and businesses are today exploring and even investing in in-country food production, using raw materials from Europe, for example, both adding value in Kuwait and reducing the import bill. In an attempt to enhance food security, it is steadily increasing the domestic production of some food items, such as poultry, eggs, fruit, and vegetables. But the lack of water places considerable limitations on any expansion, meaning that a more cost-effective and realistic approach is needed.

The appetite of Kuwait is great. Growing levels of food consumption means that approximately 90% of Kuwaitis are reportedly overweight, and 58% say that they prepare more food than they require. In recent years, the government has invested in media campaigns to raise awareness about food and water consumption in an attempt to change attitudes, in particular to water conservation.

Looking to the future, Kuwait’s Livestock Transport and Trading Company (KLTT) is ambitious in its plans for self-sufficiency. The company transports livestock from around the world to the Gulf, slaughtering in country to ensure that the meat satisfies halal standards. It takes a fortnight to transport livestock from Australia, and imports over 700,000 head of sheep per year.

In an interview with TBY, CEO Osama Khaled Boodai explained how the company is now raising 3,000 Neami ewes, a local breed, and intends to cultivate a flock of 50,000 ewes by 2027. There is a lot of technical requirements to keep such a flock alive. Boodai recounted how the company sources water from the government, the only source of water: “We have to maintain the water at a certain temperature, as the animals cannot drink hot water. We put a piping system for them deep in the ground so that it cools the water as it moves down and use chillers whenever needed.“ The end goal is to be self-sufficient in sheep production. “The livestock quantities in Australia are, in fact, reducing, as there used to be 180 million heads as a flock in 2000, while today there are only 90 million; a 50% reduction. So, if they continue with the current production levels throughout the next 10 years, we might find that there are only 40 million.“

It is projects like this that will be most welcome in the Kuwaiti market. Projects that champion self-sufficiency and reduce reliance on imports, particularly of processed goods will have the largest effect on the import bill and help guarantee food security as well as jobs for Kuwaitis for generations to come.